Check out our test teams review of the Maui Ultra Fins Windfoil 4: All, which was featured in our August 2020 edition of Windsurf Magazine. 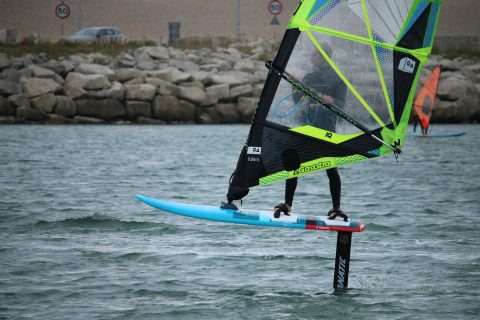 “The Maui Ultra Fins R&D team led by Rick Hanke (R&D) and Kurosh Kiani (design, testing) have come up with a great beginner to very advanced windsurf foil after three years of development. The MUF WINDFOIL 4:ALL will get you on the foil, carry you through your gybes and let you fly with freeride and race sails alike.”

New for 2020, the Windfoil 4:All is Maui Ultra Fins’ (MUF) first foray into the foiling market, and if you read the brand’s literature, it’s just the tip of the iceberg, with more wings and models to follow shortly. Released in March, just before lockdown, we have now had quite a bit of time testing the 4:All in various setups and conditions, exploring its range and appeal.

Supplied in a padded bag, assembly is very easy and straightforward, the components lining up cleanly, whilst no issue was encountered mounting the Deep Tuttle head into various boards. Produced exclusively in the EU, it is a pretty looking thing, the mast a work of art whilst the material layup and weave in the resin transfer moulded wings is clearly on display. It is clear that plenty of consideration has gone into the layup and production of the component parts, particularly the mast and fuselage. The wing shape, angular fuselage cross-section and overall geometry of the 4:All looks somewhat familiar, and Maui Ultra fins have sensibly adopted a modular system from the off, meaning that all future releases will be compatible with this inaugural product.

Tipping the scales at just over four kgs, it is easily the lightest foil on test here, along with being the highest aspect in design. (We calculated the aspect ratio of the front wing as being 8.0, while the rest in test vary between 3.3 and 4.2.) We anticipated this would translate to a fast and engaging ride on the water, and we were right. But what did surprise us was the 4:All’s usability and practicality, particularly in early lift and transition. Used in marginal conditions with a 145 litre board and 7.8m sail, the foil generates an impressive amount of early lift and acceleration. The power is stable and predictable, making it easy to control, even for the foiling-novice. The reason for this early lift is that despite the front wing being high aspect, the mast is mounted a fair way back down the metre long fuselage, pushing the front wing further forward and providing a greater work rate for its area. The second surprise was that the lift was sustained at varying speeds and pitches, blessing the 4:All with plenty of practicality in flight. If its acceleration becomes a little unnerving, the novice rider can stand over the board, stall it on its tail and temper the ride. And it’s a massive bonus in gybes, making full foiling transitions consistently achievable, providing time and balance for necessary foot movements.

As the wind increases the 4:All can be loaded to explore its race potential. The extra length in the mast was very welcome as we ventured into challenging seas, providing the ability to rise above any danger. Fast on all points of sail, we did experience some noise and whistling from the foil’s wings as speed increased, yet consulting with MUF HQ, we managed to mitigate this with some careful wet-and-dry sanding of the front wing’s trailing edge. Fully powered and pushing, we also experienced some twitch and kick back from the foil, which can be unnerving when committed, or foiling in gusty conditions. We have our suspicions that it’s from torsion in the mast and/or wings, which, whilst their shape and profiles work well, propagate some flex due to their material layup. If produced in stiff carbon, we think the issue would instantly be resolved.

Transferring the 4:All into a smaller board and freeride / wave sail setup, it was a pleasure to use for long periods, comfortably covering distances, whilst feeling engaging and forgiving through the corners. A bold statement for their first foiling product, the 4:All is an accessible freeride/freerace foil, which has the potential to perform at the highest level with some extra refinement … and we are sure it will come. 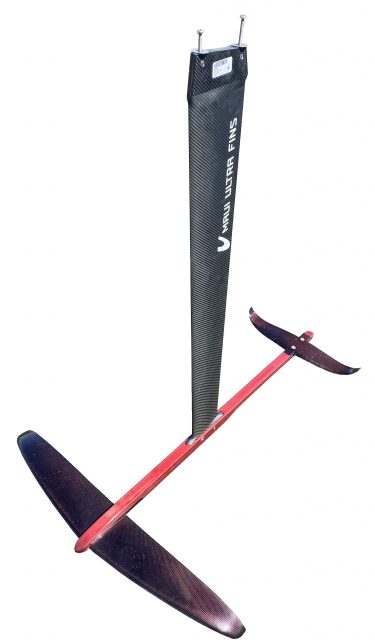