Check out our test teams review of the GA Sails Hybrid Foil, which was featured in our August 2020 edition of Windsurf Magazine.

“The Windsurf Foil Hybrid brings all windsurfers into the air, creating an easy transition between windsurfing and windfoiling, but also offering lots of speed and performance in all conditions.”

Emblazoned with the strapline “Freeride: One for All” the Hybrid from GA Sails arrived on the market late last summer, just too late for our 2019 foil test. Yet, having received some for the OTC centre, our test team have used it extensively ever since, and are now very familiar with it. The name ‘Hybrid’ is actually very apt for it, fulfilling a sort of halfway house between high and low aspect convention. It has a short relatively narrow aluminium mast, which slots into the tapered fuselage. The carbon moulded wings then screw into place, without the inclusion of any shims for any tinkering or fine-tuning. Supplied in a material bag, it is as straightforward as plug-and-play foiling gets.

Fitting the GA into a board, the holes in the top of the Tuttle head are elongated, making it easy to adjust the angle of the bolts and locate the nuts housed in the head. It’s a simple but really useful feature, made all the more apparent when using the Hybrid in different boards. The flange or skirt of the head should fit snug to the bottom of the board, yet being exposed metal can leave its mark on the board. Nothing to raise eyebrows about, but if you’re precious about kit, it may be worth investing in a rubber pad to sit between the board and skirt.

Used in light to marginal winds, it is surprising just how much lift the Hybrid generates. It does require a little more speed and water flow over its front wing than some of the larger front wings in the group, or the intervention of good foil-pumping from the rider, but as soon as it gets the idea, the lift is linear and easy to control. It gathers speed quickly and has a loose lively feel, cutting through the water efficiently. We’ve tried it in a number of boards, from dedicated 145 litre racing machines, to 105 litre compact designs, and it gets on with them all. Fast on all points of sail, the performance range of the Hybrid is its real advantage, capable of showing up full carbon outfits that cost twice as much. There is no tuning available in the Hybrid’s setup, so any tuning required has to be achieved through the board’s configuration, but in a way, the simplicity of the GA is another of its real attractions. You can tinker with footstrap and deckplate positions easily as the flight on the Hybrid is just so balanced and comfortable, giving the rider the confidence to explore its potential further. In transition the Hybrid enters at speed and feels laterally secure and stable, holding its carve and responding smoothly to any change in foot pressure. If speed is lost through the turn, the foil continues to generate lift well, providing plenty of margin for clumsy footwork and error.

At 80 cm, the Hybrid does have the shortest mast in this group; something that we would tend to pick up on as a windfoiling weakness at first glance. On the water however, it didn’t really manifest itself as the Achilles heel that we thought it might. Yes, when loading with large sails, sailing in gusty winds or turbulent seas, there was a tendency to breach on occasion, but not any way near as often as we initially envisaged. The Hybrid’s ease and innate speed kept it captivating and really encouraged the rider to foil more often and with more confidence. A windfoil specific all-rounder with real appeal, at this price it represents exceptional value. GA was late to the party, but if this is a taste of things to come from this brand, we are excited! 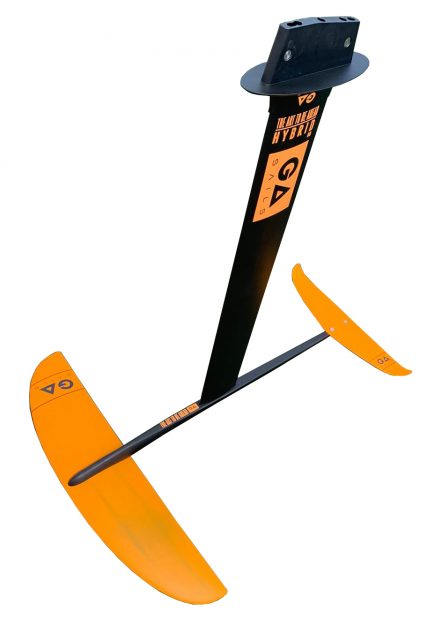