This is the review from our test team of the RRD WH Universal Alu Set, which was featured in our August 2020 edition of Windsurf Magazine. 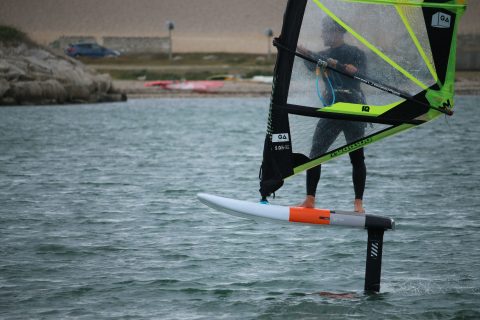 “Learn how to foil and gybe in 2 days! Spectacular lift starting at 8 knots of board speed on the water. You can go all the way up to 18 knots of top speed with pleasure, comfort and exhilarating fun. Is the most versatile hydrofoil in the range.”

New for the brand’s twenty-fifth season, the Universal is RRD’s answer to the ‘one foil does all’ conundrum. On first sight, it may seem somewhat familiar, with the same wings as the brand’s SH-Flight Alu foil of yesteryear. To make it windfoil compatible though, the Universal now has an 85 cm mast and 100 cm fuselage. It comes complete with a removable Tuttle head adaptor, which sits on top of a pedestal plate track system, so that the foil can be used with most board types. It is a breed of foil that is fast gaining traction; a product that can be used in multiple sports, from wind foiling to wing foiling, SUP and prone-surf foiling to kite-foiling. For the latter three, RRD offers the KSH Universal Alu (75 cm mast and 76 cm fuselage), which can then be complimented with a conversion kit (100 cm fuselage and Tuttle head adaptor) for windfoiling use.

Foil assembly is uncomplicated, the mast made of extruded aluminium and fitted with stainless steel helicoil threads, to ensure maximum longevity and mitigate corrosion. There is also a plastic sheath that fits snuggly round the foot of the mast, creating a barrier between the mast and fuselage when connected. Nevertheless, there are clear messages printed on both the mast and fuselage, reminding and encouraging the owner to “remove screws after use”. It’s a fair point: no matter what measures are put in place, you can’t beat Mother Nature and the fact that salt water is the perfect electrolyte for aluminium and carbon to react.

Fitted into a Pocket Rocket board (initially with straps), the Universal generates an impressive amount of bottom end lift. Pumping both sail and foil, the energy put in breathes life into the foil, which in turn rewards with plenty of positive response. It seems to generate lift without much forward momentum, releasing from the water for a nigh on vertical take off! Stable and balanced on both feet, it gains speed gradually, feeling comfortable and fluid in response, rather than sharp or instantaneous. With plenty of predictability to its flight, the Universal is an excellent tutor for those first flights, and yet it has a fun and playful nature, gliding through lulls effortlessly and asking little of the rider. Its speed is measured and it won’t be forced to any greater speed, reaching its limit and being stubbornly strong-minded not to go faster. To this end, we enjoyed the Universal far more by accepting this fact and adjusting our riding setup to suit. Take the straps off the board, change down sail size and relax into a light-hearted glide over the water. If you’re after a blissful liberating free sail, then the RRD will provide. You don’t even need to use a harness if you don’t want to! When we tried the Pocket Rocket last year, this is the foil that was missing from the equation. It responds wonderfully to foil pumping, the short Pocket Rocket enabling you to rock on the foil and maximise its potential. Full foiling gybes are a cinch, the deck free for easy foot movement whilst the foil generates lift at the slowest speeds. We did use the Universal in other boards and had an equally fulfilling experience. And then there’s the option to use it for various other sports, perhaps the most notable being wing foiling. It does take a little more technique and input than some of the larger (2000 cm2+) front wings currently in use, yet it responds superbly to input and demonstrated a genuinely fun all-round performance, accessible in various guises. 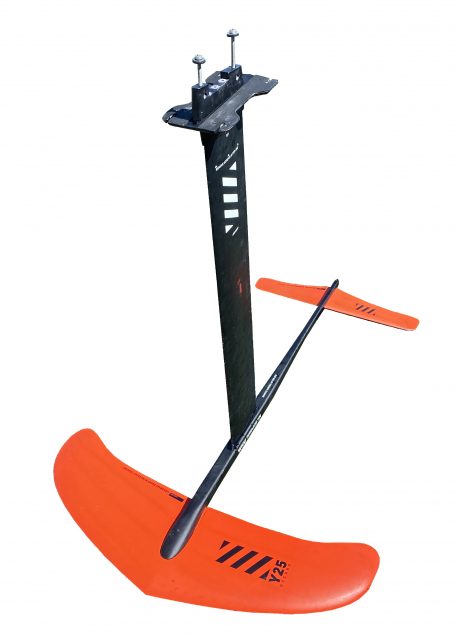