Windsurf MagazineSARAH HAUSER | DREAM IT, DO IT

Sarah Hauser has had the long lefts of Cloudbreak, Fiji on her bucket list for a while and on the eve of her 30th birthday decided to turn dreams into reality, pressing the button on a ticket to ride its fabled waves. She tells us more about her successful adventure to the South Pacific.

For a couple of years I have been dreaming about windsurfing at Cloudbreak. This spring I had just started riding for S2 Maui and my teammate, Camille Juban, had decided to go ride the infamous wave in Fiji. The forecast looked too uncertain to me (not enough wind) to spend the money on a ticket so I passed on going with him.

Camille left and a couple of days later, by the end of his first day of windsurfing, he had practically broken all his equipment dealing with over-mast-high barrels and less than 10 knot winds! Art Szpunar, the owner and designer of S2 Maui, wanted to find a way to send him more masts and sails. As I learnt this news I realized that the forecast had changed for the better, so we decided it was me who would bring the gear to Camille. This was a dream come true: my sponsor agreeing to help me get to Fiji! I just had to pack my board bag and catch a plane taking off at 11:30 a.m. … which would be fine, except it was already 10 a.m. Fortunately Casey, my husband, was at home that morning. We rushed to pack my gear and Casey dropped me off at the airport. I begged people to let me get ahead of the lines, I ran to the boarding gate and prayed that my 2 board bags had been put on the plane in time before taking off.

First stop was Honolulu, then Brisbane and finally I arrived in Fiji in the morning. At the surf camp I was welcomed by a surfer girl with reef cuts on her legs, she had a toothbrush in her hand and was about to scratch her wounds to get out pieces of coral stuck under her skin. Just like in New Caledonia – where I grew up – the Fijian coral is very sharp, alive and sometimes poisonous. The humid tropical climate makes wounds easily infected. Even mosquito bites get infected! And to add to the risk, for this swell it turned out that we had a low tide in the middle of the day, meaning it would be pretty shallow over the reef! 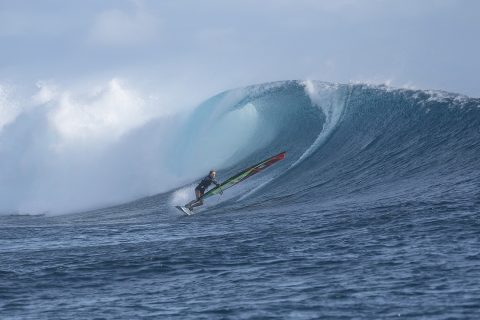 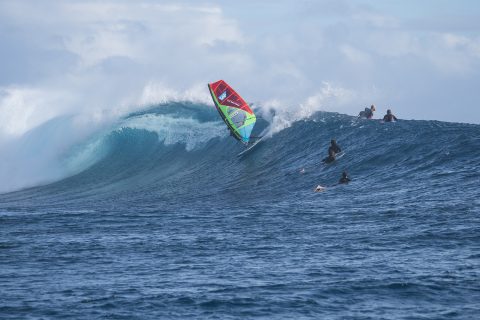 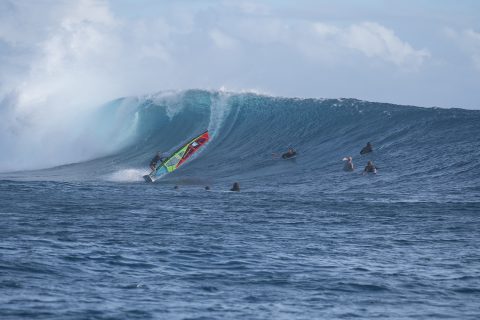 As I prepared my equipment for the afternoon session I began to feel the fatigue from my 24 hour trip. My stomach was in full “fear mode” but I forced myself to eat a little bit. We loaded our stuff into the boat, and we headed out to sea. This brought back memories of my first wave sailing sessions in New Caledonia. There too the journey would start with a boat ride to the outer reefs. As physically demanding and time consuming as it sounds, I would always enjoy that part. You never knew what you were going to get, so it was always an adventure! That familiarity brought me peace and I started whispering to myself, “I can do this, I trained so hard for this, I am prepared for this, I am living my wildest dream right now!”

About twenty minutes later we were there: Cloudbreak! A smooth, translucent wave enveloped a surfer who lets himself get swallowed standing tall in the tube, his arms stretched over his head. The reef is dry and the wind is very, very, very light. I rig first and jump out of the boat. For a moment I take in the fact that 24 hours ago I was in Maui without any idea of what was going to happen. As I get closer to the peak a group of 20 surfers look at me as an intruder. I observe the wave, I let a few pass by to show my respect to the surfers and then I start to play. It’s definitely challenging dealing with the crowd and the super light wind, but little by little I start catching better waves. They’re so perfectly smooth and powerful and the colours of the reef through the clear water are beautiful. Some 3 hours later, the sun was almost down when I saw the biggest wave of the day on the outside so I tacked to catch it. The sun was now behind me and as the wave reached me I could see its own shadow covering me. Oops! I might have gone a little too late on this one! The water steepened under me as I air dropped and I tried to control my gear that was getting blown off because of the updraft of the wave. The idea of letting go up there seemed so scary that I held onto the gear with all my strength and finally managed to put the board down on the water but was now going down vertically! I watched the nose of my board hover on the verge of diving underwater … but it didn’t! In my head I thank Fabien Vollenweider, the Tabou shaper for my magical DaCurve. I thought I was out of the woods, but that half second spent stabilizing myself made it too late for me to pass the mast high section that was peeling in front of me. So I ejected from the footstraps and I prepared for the wipeout by covering my face with my arms in case the wave pushed me against the coral. I took 4 other waves on the head, but fortunately it was almost high tide so I was able to avoid the reef! There was a surfer next to me the whole time and we took the sets on the head together. Once out of the impact zone he paddled towards me, grabbed my hand to lift it to the sky and screamed “yeaaaaah”. I guess that’s what they call an adrenaline rush!

I slept really well at the end of all this! The next day was my birthday and was one I will not forget! In total we were treated to five days in a row of action. I could not have imagined a better gift to celebrate my 30th birthday! I am incredibly grateful for the support of my sponsors and relatives because such an adventure seemed unimaginable to me a few months ago. Thanks to my equipment, preparation and the people who believe in me, I rode waves at Cloudbreak! Next dream: Cabo Verde!

“My stomach was in full fear mode”.