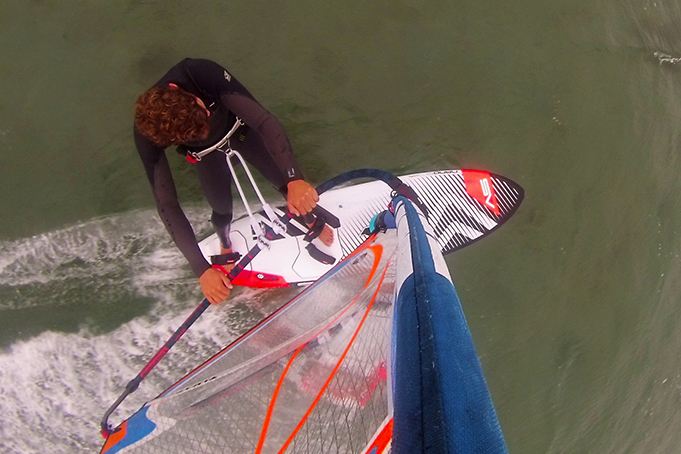 THE VERDICT
A unique board amongst the group, with a dedicated required setup and stance, the Nano can take your riding to another level on the expressive scale for those looking for a modern surfboard style board look and feel.

THE LOWDOWN
The all-round wave Nano has been completely reworked for 2020, with six sizes now featured in its range, including this brand new 87 litre size. Influenced by the latest shaping developments in surfboards, designer James Hooper has crammed so many unique details into the Nano’s form, it is hard to know where to start! Short and compact with parallel rails, you’d be forgiven for thinking that the new Nano’s outline has softened, looking at the rounded pin nose. Yet peer towards the tail and you quickly realise the bold shaping of its predecessor has not been forfeited. In fact, if anything it’s been amplified. Wingers precede a straight edge outline in the tail, leading into a complex angular swallow tail, matched only by the intricate channels on the underside, said to enhance the board’s already tight turning radius. The rails themselves are super sharp in the tail, tucking early and morphing into bevels in the nose with a soft outer radius. The rail profile is super thin in the tail, yet becomes progressively fuller towards the nose, described as providing ‘automatic trim’ with the nose riding high and safe of danger whilst the tail bites in. The deep vee of its predecessor remains, creating a spine that runs almost the length of the board, the fin boxes located incredibly late in the rockered tail. Matching its modern surfboard style design, the rider’s stance is also positioned well back on the board and is perched high on its heavily domed deck. Supplied with thruster fins, there is also a quad fin setup available as an optional extra, intended for increased stability in down the line conditions. With Severne offering the all-round Dyno freewave board and classic Mako wave board, we were keen to see how the compact Nano performed.

PERFORMANCE
The unique Nano II design is matched by its riding style and nature on the water. The optimum setup is key for its performance and that setup is in keeping with its modern surfboard styling – mastfoot right to the back of the track and rear footstrap right at the back (with front strap in middle position) to maximise its planing and encourage the wider ‘pro’ stance it is designed to be ridden with. As power is provided through the sail, reach for the straps early and weight the Nano’s tail to aid planing. Under way the Nano had an average speed within the group and prefers powered conditions where it cuts through chop well, the deep vee through its bottom shape helping to iron out the ride. The required stance will take time for some to adjust to, but when riding, whether cross-on or cross-off, the Nano thrives on being driven hard and aggressively through the back foot like a surfboard and is capable of making the tightest sections. Rather than setting the Nano on the rail and heading down the line and redirecting, the Nano prefers a more active approach – you need to wait on the wave until the last moment, before driving through turns confidently and pushing all your might through the tail. Get your timing right and the Nano will punch aggressively off the top, its compact concentrated nature in the rear giving the rider the control for re-entry down the face. It makes you feel like a superhero, inspired to charge harder through the next turn! We had a chance to try the Nano in many different setups and preferred it as a quad, using the Severne fins in the optional extra bundle. The thruster setup was almost too loose in feeling, whereas we found the quad setup complimented its style and performance perfectly.