The famous waves of Supertubos in Peniche, Portugal turned on for Thomas Traversa on a recent strike mission, he tells us more about the session.

With the various travelling restrictions due to the Covid crisis, Portugal was one of the only places where I could travel to this past winter that was good for windsurfing. It’s really exposed to the majority of swells and the dominant north wind is very favourable to windsurf most of its surf spots, blowing side to side-offshore almost everywhere. The climate is also a touch warmer than in most countries in Europe, and it’s pretty sunny even in winter, so it is a perfect destination for spending time with family, while also scoring some epic wave sailing every now and then. Since we have bought a camper van, I think it has become our favourite destination, and now we have many friends there, so it’ s always a good trip for the whole family! In March we decided to go without looking at any kind of forecast and I only sailed once in the first 10 days of our trip while we were in Algarve, but when the forecast started to show this long-period west swell, and some decent north wind, I knew that Peniche was going to be cranking. 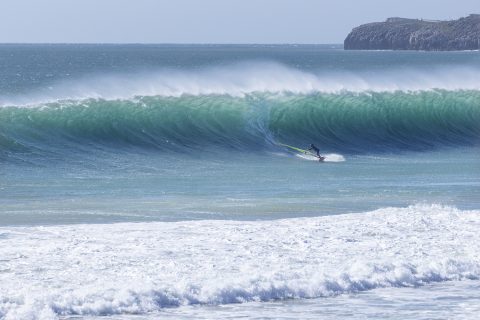 Thomas scores Peniche to himself!

I travelled with only one board, so it was an easy choice on what board to use on the day! It was my 70-litre tri-fin board that I use most of the time. The wind was a bit light, so I went on a 4.4. It’s always tricky to go through the waves at Supertubos, so it’s not a place where you want to be completely underpowered. The swell was only 2.5 metres, but the 16-second period and the west direction created really powerful waves up to solid mast-high. Supertubos is a bit sheltered from the northerly swells, so the more west the swell is the bigger it gets. I was expecting good waves with that forecast, but a couple of sets were actually massive, well over mast high and very hollow. On the first very big set I mistimed my bottom turn and got annihilated after letting go of my gear to be safe. I broke the mast and damaged the mast sleeve of the sail, but I ran up the beach, got a new mast and went back out. 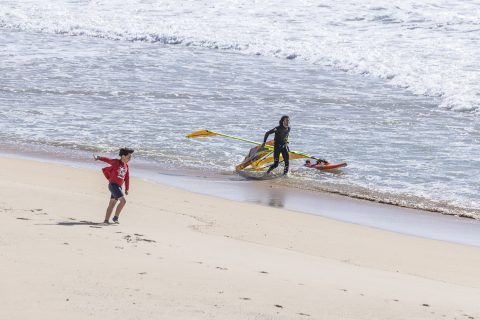 After breaking the mast on that big bail, I rode some nice waves, but at some point I tried to go through the waves at the wrong moment or in the wrong place, or both, and this mast high barrelling left-hander got me and smashed me! I hit the bottom and was stuck in that rip for at least 5 more waves, 5 very big waves! I dodged a few, but as the current was pulling me to the outside without my gear, I had to let a big one take me back to the inside where my broken sail was waiting for me. Next to me was a surfer who got a sick barrel on the second wave of the set, the next couple of waves also punished him and he broke his board. After this the wind picked up, so I went back out with a 4.2. 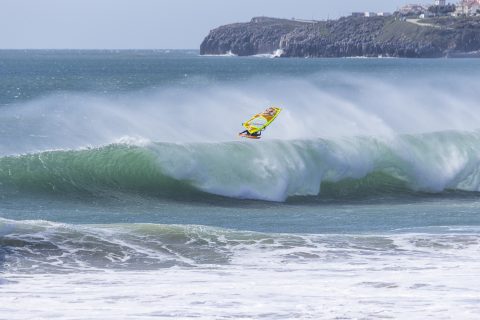 COMPANY
In Supertubos the main peak is full of surfers and boogie boarders, but when it starts breaking at solid mast-high, there is a natural selection, particularly when the north wind is blowing over 20 knots, it then becomes really hard for them to get good waves. My strategy is to sail a different section of the beach when the waves are good for them on the main peak, and this is what I did at the start of this session. When the wind picked up and the waves got bigger and gnarlier, they all went out of the water and I had the spot to myself for the last 2 hours of the day. As long as you stay away from them, the surfers and boogies are cool, they even cheered for me when I got some big airs, which was really nice to see. 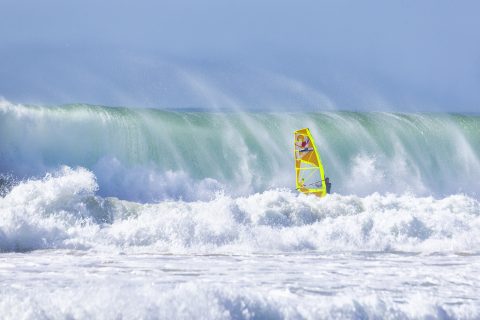 It is not an easy place to sail because the wave is extremely powerful, everything happens so fast and any mistakes can have serious consequences. But at the same time it‘s one of the most prefect bowls you could imagine, a perfect A-frame with clean cross-off wind. There are no rocks to be afraid of, you can ride the smaller or the bigger waves, and there is nobody to battle with to get the best ones. Honestly, it’s one of my all-time favourite spots. Every session I get some nasty wipeouts, hit the bottom and break gear, but I also get some incredible waves, some of the most critical airs ever, it’s such a wild ride! 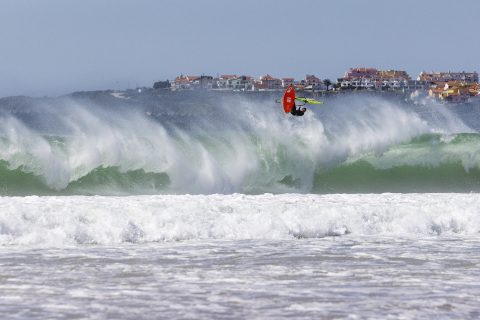 As you can imagine, at the end of the session I was totally destroyed, one mast and one sail broken, some crazy wipeouts, a lot of swimming and running up and down the beach… but feeling so good, so stoked and high on adrenaline!

« 6 EXERCISES EVERY WINDSURFER SHOULD DO EVERY SINGLE DAY
THE TIBERIAS PWA WORLD CUP: ISRAEL PWA »