Log In
05/10/2016
by Editor
Category
Tweet
At the halfway point of the 2016 Mercedes-Benz Sylt PWA World Cup, a result has been gained for all three disciplines, after the opening slalom race of the event was completed today in winds of 10-15 knots, which saw most sailors reaching for their 8.6s and medium boards. Matteo Iachino (Starboard / Point-7) made the perfect start as he claimed the first bullet to extend his lead at the top of the overall rankings — for now at least. 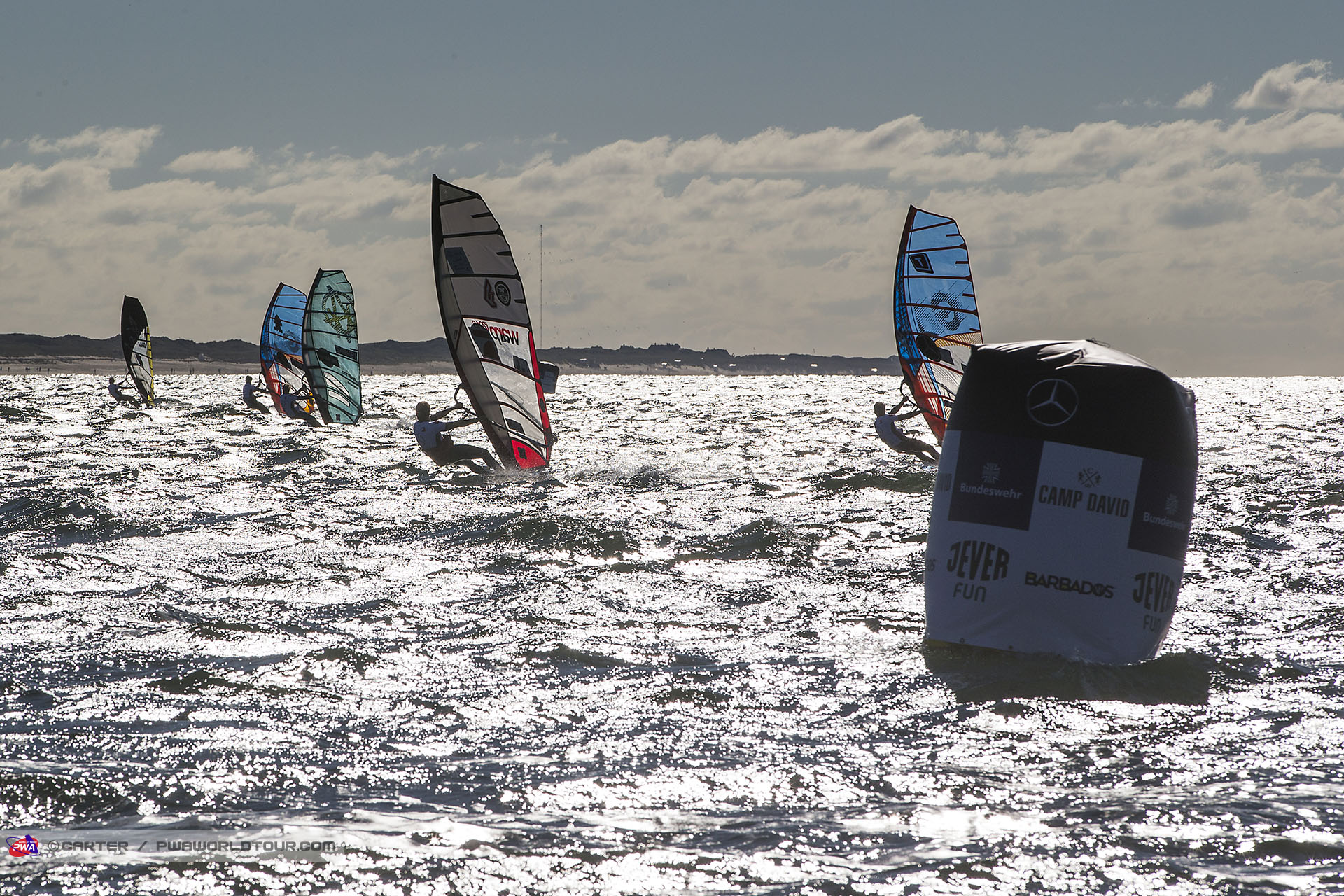 The rest of the pack chase Matteo Iachino
Slalom
Men’s
Elimination One
Matteo Iachino and Pierre Mortefon (Fanatic / NorthSails) came into the event tied on points — with Iachino ahead on countback — and both of the title contenders successfully navigated their way into the winners’ final, making for an extremely exciting first final with whoever beating who temporarily taking control of the title race. 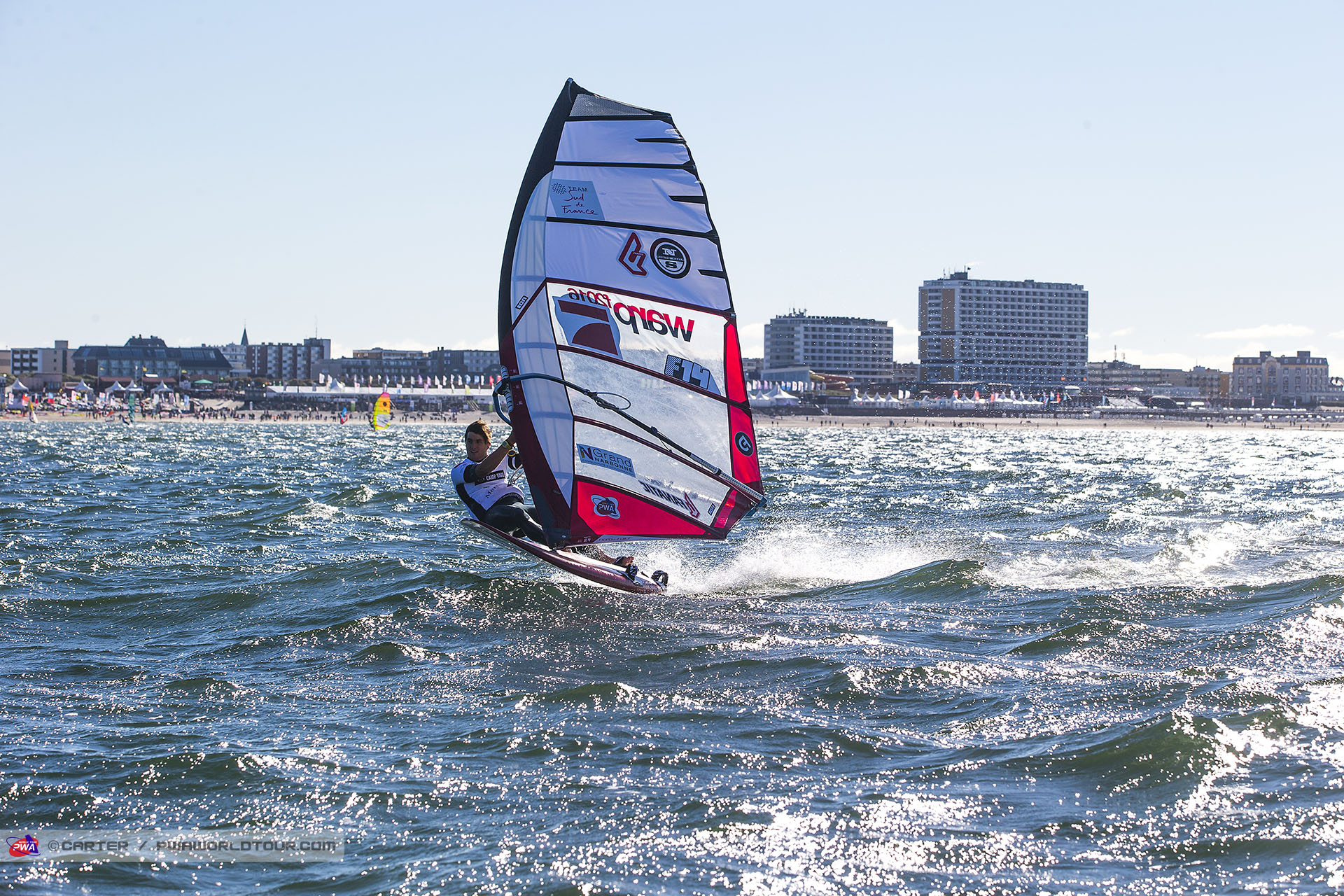 Pierre Mortefon on the fly
Winners’ Final
Heat 16 was completed at the second time of asking after reigning world champion — Antoine Albeau (RRD / NeilPryde) — was disqualified after jumping the gun. Upon the restart Iachino grabbed the lead from the word go and safely rounded the first mark ahead of Antoine Questel (Starboard / GA Sails) and Ross Williams (Tabou / GA Sails / Mystic / Shamal Sunglasses), while Mortefon was stopped in his tracks as the Frenchman hit a piece of chop after unhooking ready to enter the first gybe — leaving him at the back of the pack. Over the remainder of the course Iachino extended his advantage as the 26 year old made the best possible start. Antoine Questel secured second place, while Julien Quentel (Patrik / Avanti) out maneuvered Williams to take 3rd, which has more significance with the two sailors extremely close in the battle for the final place on the overall podium. Meanwhile, Mortefon did brilliantly to fight his way back through the fleet into 5th place. 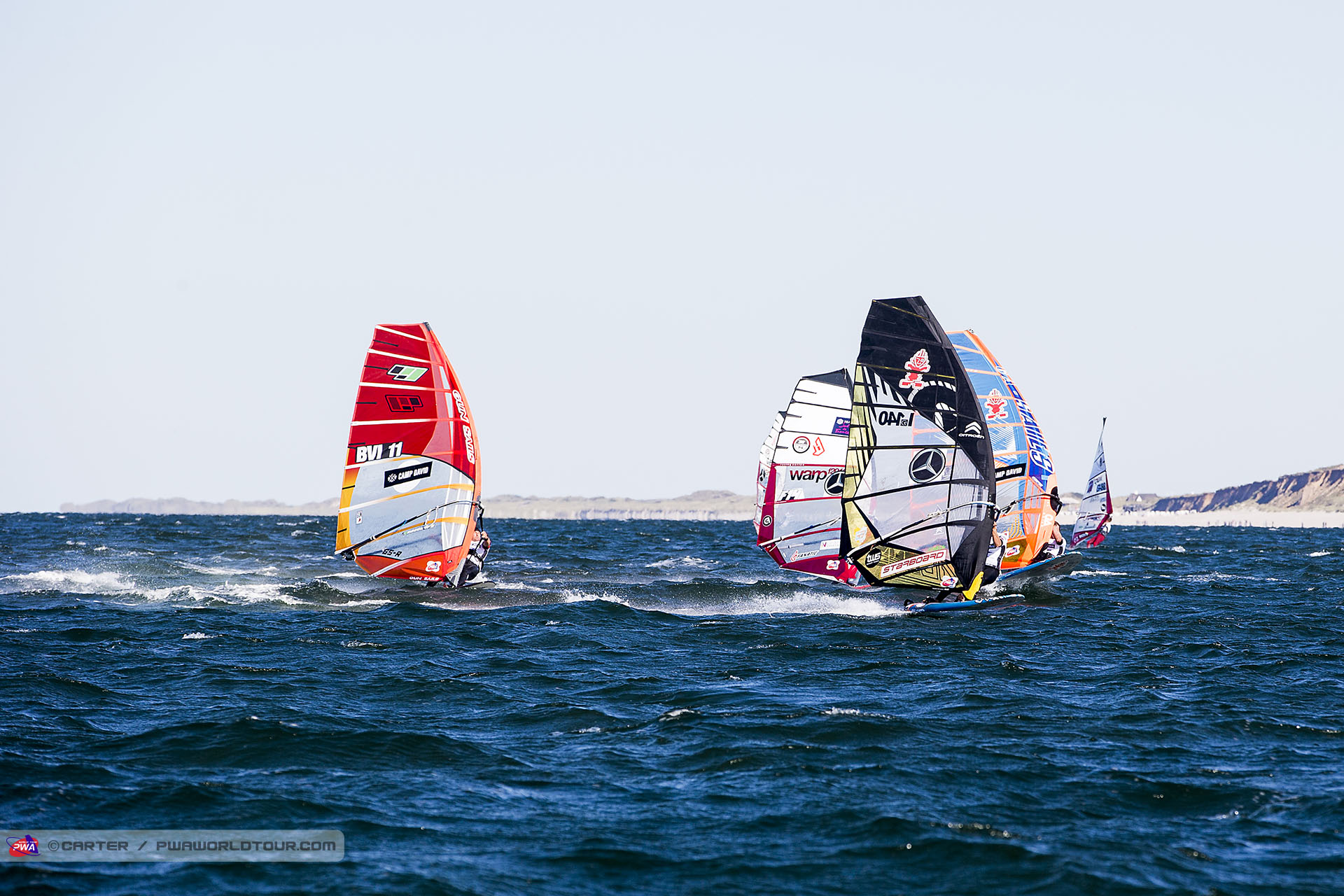 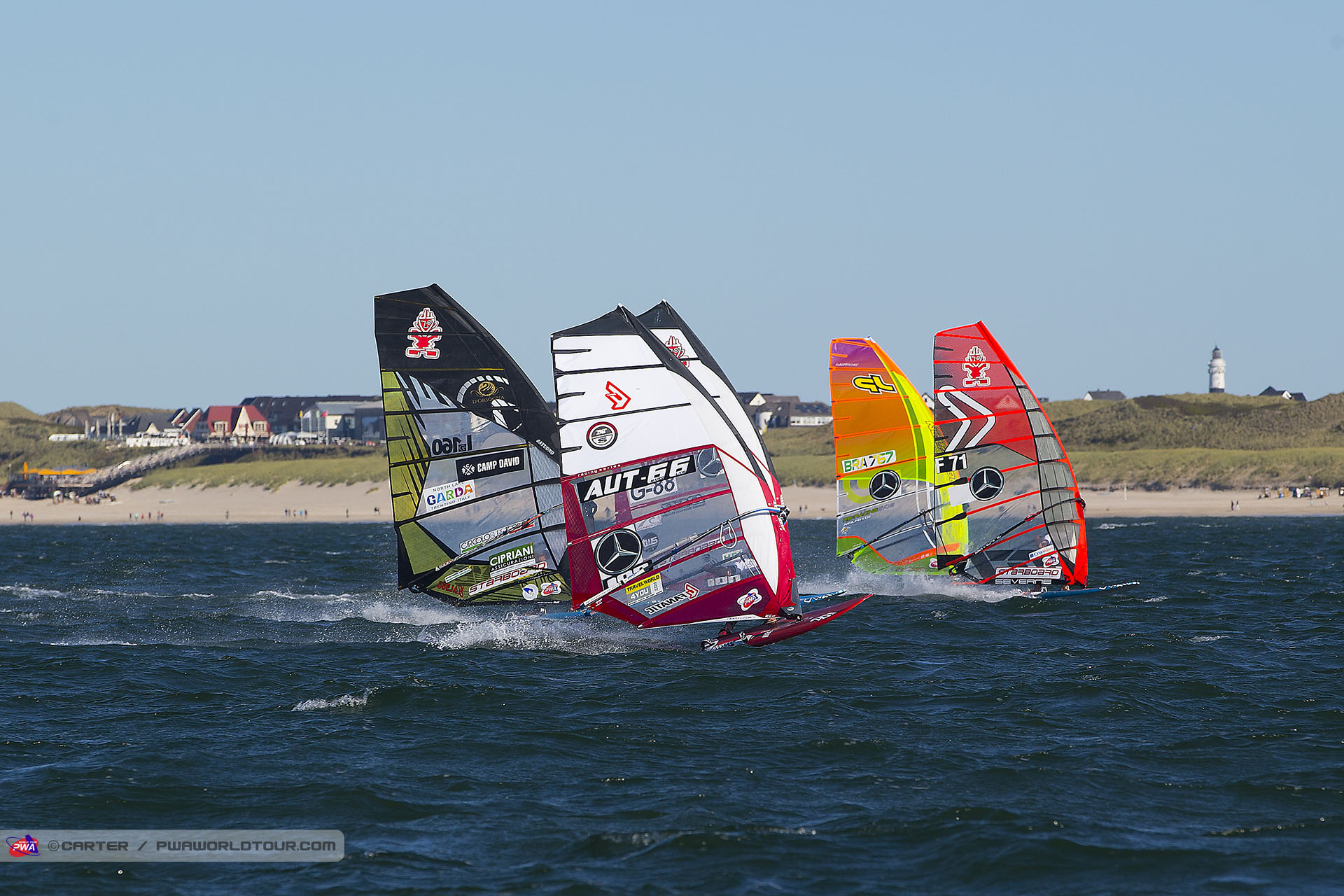 Marco Lang wins the losers’ final
In the opening race of the week there were also plenty of upsets with Malte Reuscher (JP / NeilPryde), Jimmy Diaz (Starboard / NorthSails) and Ben Van der Steen (Tabou / GA Sails) all being eliminated in the second round, while Pascal Toselli (99NoveNove / Challenger Sails) — making his first appearance since dislocating his shoulder in Fuerteventura — Arnon Dagan (RRD / NeilPryde), Taty Frans(Starboard / GA Sails / Mystic) and Cedric Bordes (Tabou / GA Sails) all missed out on a place in the semifinals.

Arnon Dagan
Jules Denel (JP / NeilPryde) was making his first appearance on the slalom tour for several years and the Frenchman advanced through the first couple of rounds before being eliminated in Heat 11.
Meanwhile, in Heat 2 — Nico Prien (JP / NeilPryde) — did superbly to make the second round after having to sail his heat with no starboard tack harness line. The German still held his own to earn 2nd place, while Ingmar Daldorf (Patrik / Loft Sails), Michal Aftowicz (Point-7) and Andrea Ferin (RRD / Challenger Sails / AL360) also advanced. 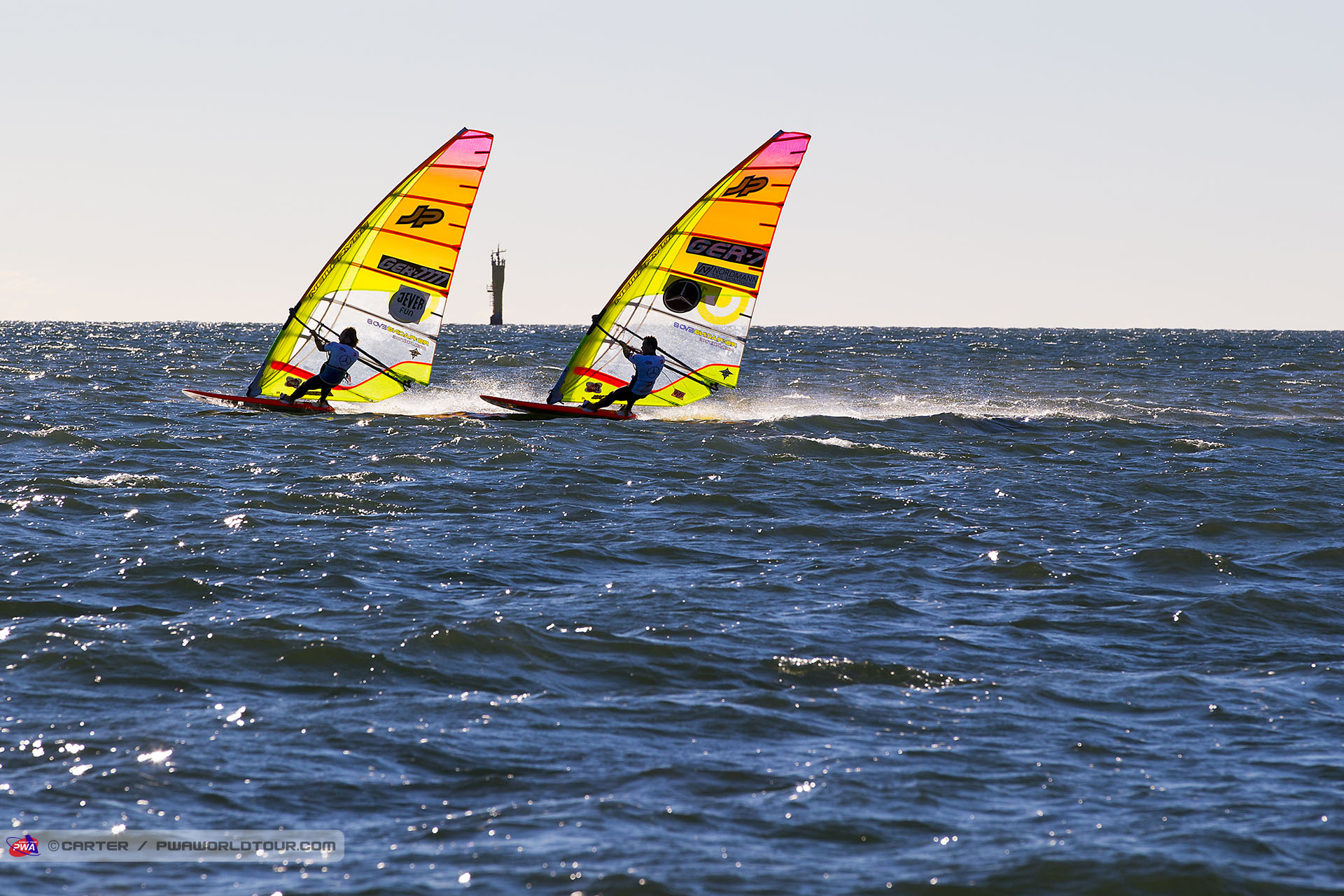 Nico Prien
Elimination Two
The second elimination was started but only two heats could be completed before the wind became too gusty and light to continue. 18 year old — Peter Nors (JP / NeilPryde / Maui Ultra Fins) — who was making his debut on the world tour advanced from Heat 3. 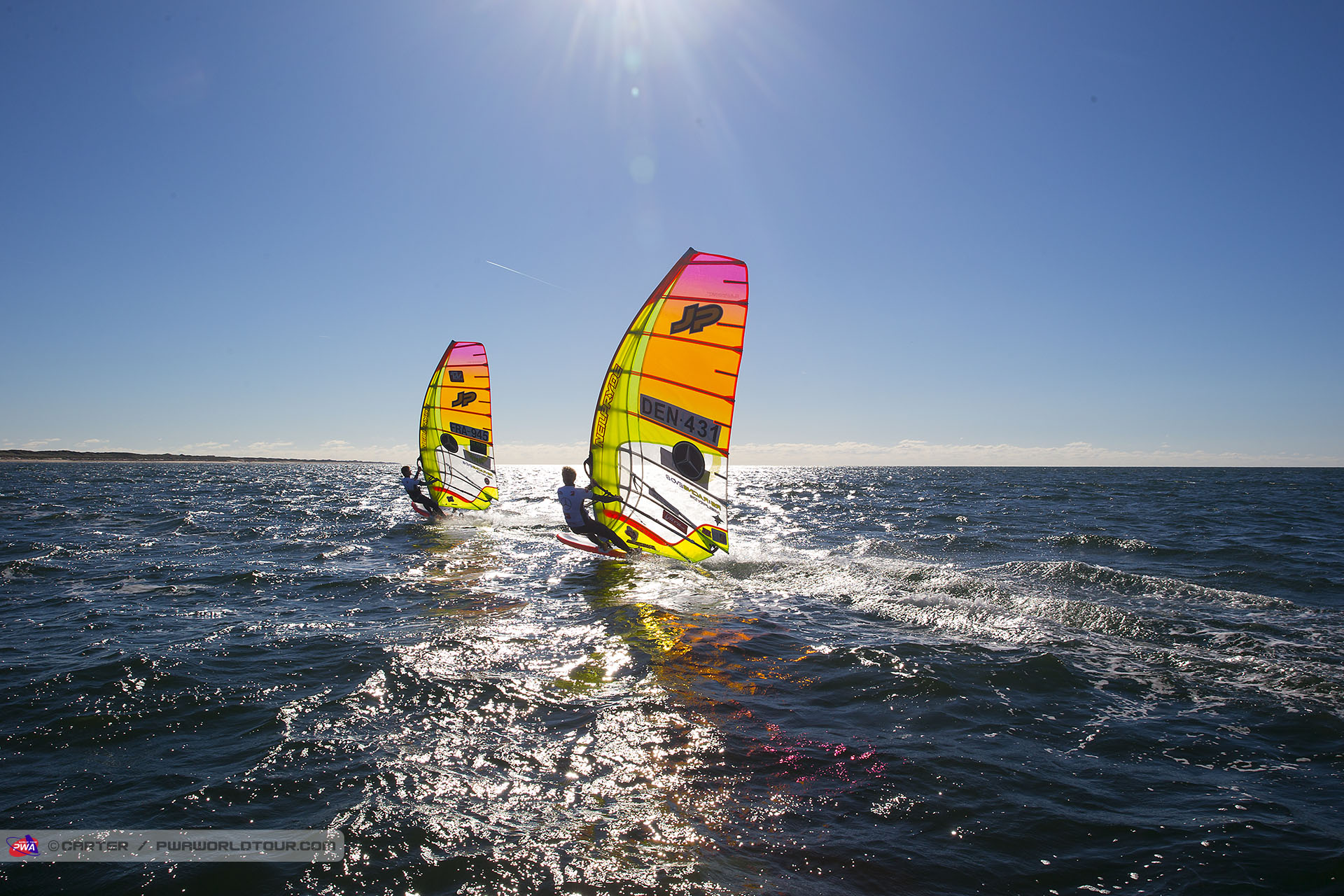 Peter Nors
With the conditions becoming borderline the decision was made to switch back to the foil exhibition races, which provided a great show for the spectators, close to the shore. A further 4 races were completed today and after the discard — Antoine Albeau (RRD / NeilPryde) — has shot to the top of rankings, but Gonzalo Costa Hoevel (Starboard / Point-7) and Sebastian Kornum (JP / NeilPryde) are just 0.7 points behind. 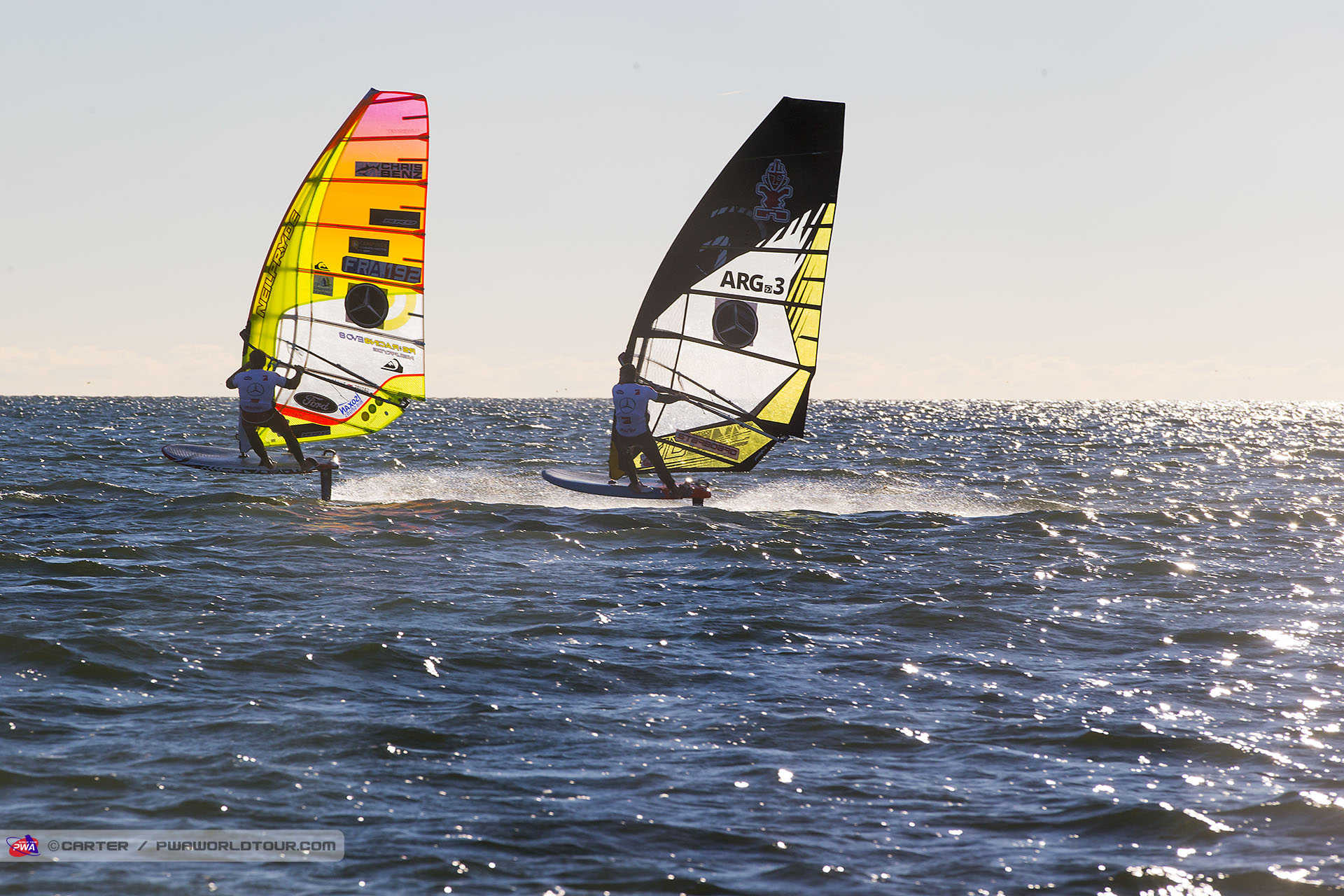