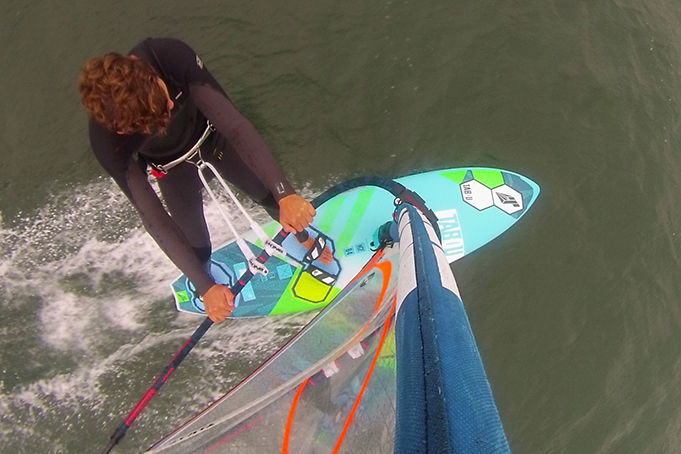 THE VERDICT
More adaptable than the Da Curve 88 tested last year, the Da Bomb is a wave board thoroughbred, offering comfort and balance through both feet, and with a versatile carving style that simply loves to be pushed. 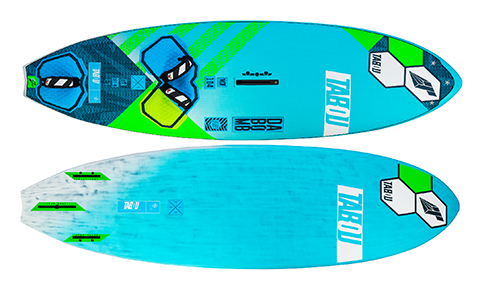 THE LOWDOWN
The Da Bomb has been in the Tabou range for three seasons now, and in the words of the brand, has been “evolved steadily to adopt the latest trends and styles in the sport”. Described as their option for the ‘new school wave rider’, it is short yet wide, retaining plenty of width in the tail, with a subtle wingered step before finishing in a swallow tail. There’s plenty of dome to the deck, tapering down to thinned rails, intended for easier initiation into the corners. The rails themselves are super sharp in the tail, before tucking under the board early and becoming soft in the nose – reminiscent of a short surfboard. Yet the key development for the new season is a faster rocker and reduced tail kick, aimed at improving the board’s early planing and speed. Any loss in turning potential is then said to be countered by the inclusion of large channels in the tail, with the aim of increasing looseness and control in the turn. Produced in the brand’s new wave carbon innegra flex (WCIF) construction, it certainly looks the part in its bright green-blue livery, and draws the eye with its definite surf style influences. Supplied with an MFC thruster fin package and a double screw back strap setup as standard, it offers six front strap positions to provide an abundance of tuning permutations to meet varying riding styles and demands. The diamond-grooved deckpads are also incredibly thick, albeit surprisingly easy to compress when screwing in the straps.

BRAND CLAIM
“The Da Bomb’s fast rocker allows you to catch every wave, while the mini-channels on the bottom add looseness for tight and controlled turns.” – Fabien Vollenweider.

PERFORMANCE
Taking the Da Bomb out in marginal vanilla conditions, it gets going early and accelerates to a respectable speed, yet feels a little lacklustre and passive in manner. We tried to understand why and believe it’s to do with the setup and fittings. Firstly, the deckpads of the Tabou are incredibly thick and soft, which combined with the soft straps provide a uniquely cushioned ride. The mast track of the 84 is also a good 5 cm further back than on most, increasing the nose length and making it feel quite directional initially, despite its short length. We played with the mastfoot position and it certainly changes the character of the board, yet the dampening of the fittings can’t be overcome. As the conditions turn on however, they become a real asset rather than a drawback, absorbing harsh feedback and allowing the rider to lock in to maintain their stance. It is worth taking extra time to adjust the straps precisely to your taste; if the straps are too big you can easily find yourself slopping around in them. Feeling controlled and connected through the tail, rather than loose or nervous, the rider can drive power through the board confidently, using its speed to charge at ramps on the way out for some serious airtime. Yet it’s on the way in, in a wave environment that you soon appreciate the Da Bomb’s capabilities. On the wave face the Da Bomb has a truly versatile manner, gripping through its rail during front foot entries, yet providing plenty of feel and bite through the back foot if the pilot wishes to tighten the radius mid-turn. In cross-onshore to onshore conditions, the 84 holds its speed well through the arc, the channels and width in the tail enabling the rider to gauge and redirect on demand. We moved the mastfoot right to the back of its track in these conditions, which increased the board’s pivotal nature through the tail. The by-product means that there is also plenty of volume and stability as you step round the front during a tack! And in larger cross-shore days we moved the mastfoot forward to increase the control and drive through the length of the board’s rail. In these conditions the Da Bomb feels more and more at home, thriving on being driven hard through the front foot for a smooth, addictive and powerful carve.