This is the review from our test team of the Tabou Magic Carpet 120 MTE, foil board, which was featured in our September 2020 edition of Windsurf Magazine.

THE LOWDOWN
Tabou’s foiling board programme is steadily increasing in scale each year, with the introduction of the Air Ride last year (now expanded to include a 74 as well as the 81), to compliment the competition-focussed ‘Air Ride Plus’ two-board lineup. The Magic Carpet is a new offering, released late in the 2020 season to satisfy the fast-emerging demand for a crossover or convertible foiling platform. This 120 litre version will remain identical for 2021, and will be joined by a smaller 110 litre sibling, increasing the Magic Carpet range as it sits between the windfoil specific Air Ride and the soon to be released wing foiling Air Pockets. In design the Magic Carpets have some really interesting features, being short in length yet rounded in outline, before finishing in a wide square tail. The rails are rounded from the deck, before tucking under the board to adopt a hard edge well inside the board’s outline, the idea being that the high rail apex grants the board an improved water release. And under the blocky tail there’s a stepped spoiler design to increase release as the foil is pumped – a fast emerging and popular design feature in foil specific boards. Produced in the brand’s durable MTE construction, it is relatively heavy at close to 10 kg, yet has an attractive price tag to match. Coming complete with a set of four quality Tabou straps, there are a myriad of strap placement options to satisfy demand in wind foiling, wing foiling and SUP foiling; there’s even a central strap plug option between the Tuttle Box holes in the deck! The so-called ‘monopad’ (with large integrated kicker pad) extends over much of the board’s deck to provide traction wherever the rider stands; there’s a recessed handle in the hull to assist carrying with a foil; a leash mount under the tail and both foil box options to cater for either foil mounting preference. 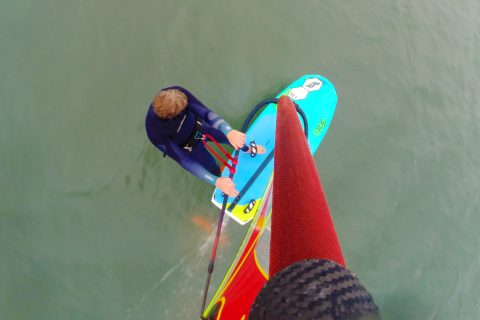 BRAND CLAIM
“Foiling has become a big part of windsurfing and more and more riders need a board that does not only allow them to foil with a windsurfing sail, but also with the newly introduced wings or with a paddle in their hands. We blended the different board concepts and came up with the Magic Carpet, which is the perfect platform for various foiling disciplines.”

PERFORMANCE
On the water the Magic Carpet exhibited true crossover qualities, being a pleasure to use in both wind foiling and wing foiling. At rest it offers plenty of stability to back up its quote of 120 litres, feeling easy and buoyant underfoot. There’s no getting away from the fact that it is heavy, which is noticeable when the board is off the plane, sitting lower than most whilst displacing water. Nevertheless, as soon as you deliver power and bring the influence of the foil into play, the board’s weight is an issue dispelled. In fact, whichever foil mount type you opt for, it is located relatively far back in the board – a position from which you can plough power through the back foot and pump the board clear of the water. Whether it is the influence of the stepped tail shape, or width and volume in the back of the board, you can really stamp down hard and maximise the response available. Once in the air, the Magic Carpet’s gentle domed deck is comfortable underfoot, the large diamond-grooved deckpad providing excellent traction, and the kicker pad helping to locate the back foot without looking. Fix straps onto the board and the Magic Carpet can be loaded and driven hard to accommodate the freerace foiler amongst us, with plenty of width in the tail to help get away from the sail and keep it upright. Happy to be used with sails of 7.5 and smaller, the Magic Carpet really comes into its own as a manoeuvre oriented contender, and a great intro platform for wing foiling. Used with a Tuttle headed foil for winging, you do find your stance quite far back on the board, increasing swing weight and giving it the perception that it’s larger than it actually is. But used with a pedestal plate, the rider can move their stance further forward, providing real balance and playfulness between both feet.

VERDICT
A wide user-friendly platform, offering accessibility in both wind foiling and wing foiling, yet without feeling compromised in either role. Whatever your preference in foil type, footstraps (inboard, outboard or none!) and discipline, the Magic Carpet has the versatility and ease to sprinkle enjoyment onto your session. 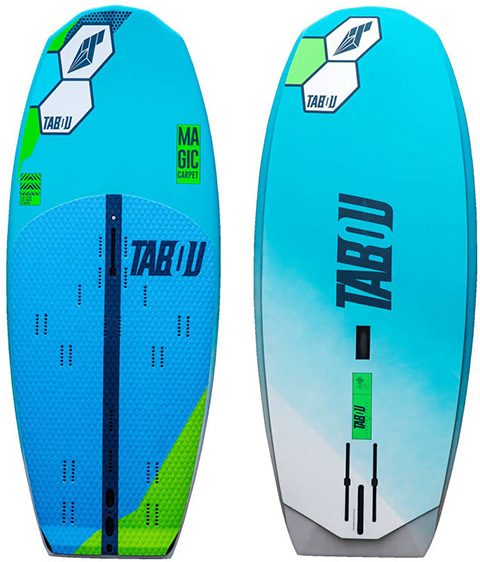 OTHER BOARDS IN THE TEST:

Back to test overview: