If you are interested in Wing Surfing then look no further! From our September Issue here is the introduction to our Wing Surfing Product Guide brought to you by no than Mr Robby Naish himself with some expert wing advice before we look into a selection of wings from the leading brands on the market!

Unless you’ve been self-isolating under a rock or barricaded yourself in a toilet roll warehouse, you can’t have failed to notice that wing surfing is definitely a thing now! If you have more questions than answers about the new wind sport on the block, then relax, as we have enlisted the help of the one and only Robby Naish to impart his wing wisdom. And if you are planning a purchase to get your wing on, then have a look at our product guide as a selection of leading brands showcase their latest products on the market.

When the King speaks, we listen! Read on, as Robby Naish gives us practical advice and his take on the new wind sport of wing surfing. 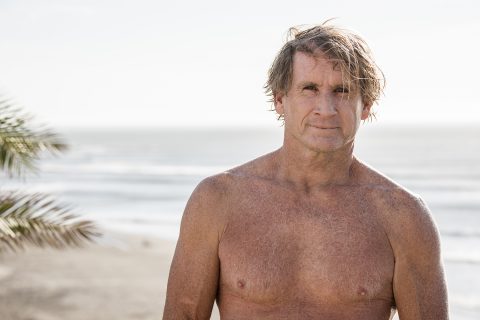 Wing surfing is all about simplicity, it’s a package that’s really easy to put together, no rigging components, no lines, no bars, everything is just in one unit, you pump it up and you go. You can spill wind and make power that you can get going with pretty darn easily. People ask do you have to foil?, can you use it on a SUP?, can you use it on a skateboard? You can use it in all of the above, but a foil makes the most sense in terms of how much power you can make from a wing and how much lateral resistance a foil board has, so they really fit nicely together, but it is a lot of fun on a SUP too. You don’t need a harness to wing foil as there’s so little resistance once you get going; it’s actually creating lift and weighs very little due to having no hardware. It’s really light in the hands and I can sail for hours with no harness at all, and it packs up into a little tiny backpack, which makes it easy to store and travel with. 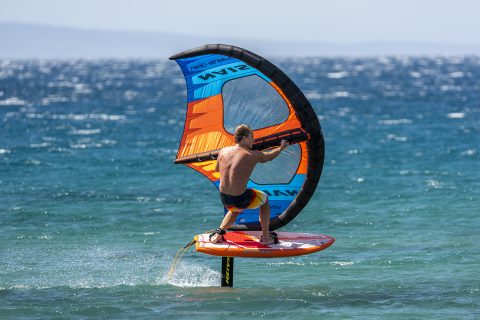 You need a ‘floaty’ board unless you’re very, very good; something you can climb up on, get to your knees quickly on and stand up and then use the wing to get you going. So I’m on a 95 litre most of the time and I think most people will be on 95 to 135 litre boards, somewhere in that range. If you’ve got a few whitecaps you can pump a fairly big foil onto the plane and get going, if you use an even larger foil, like a big downwind foil, you can go in even lighter winds. Getting going all depends how much wind there is, how big you are and how big a wing you’re using. I use footstraps, but you don’t have to and I recommend using a board leash as you can definitely get yourself into situations where you want to be connected to the board.

When starting wing surfing it’s good to know how to get up on a foil from wind foiling, surf foiling, SUP foiling or wake foiling behind a boat, so you have the balance experience of being on the foil and then you bring the wing and the wind element into it after that. Trying to learn all of the parts of wing foiling for the first time all at once would be pretty difficult I think otherwise.

Handheld wings have been around for decades, the first wing that I tried like the modern wings was actually in 1981 in Kailua. Is this latest version of the wing going to replace windsurfing or kitesurfing? No, it’s an addition, it’s something fun, new and with the emphasis on simplicity. Are you going to go as fast as you can windsurfing or jump as high as kiting? No, absolutely not. This is a compliment to those sports, it’s something different. For me, it’s just about carving around using the wind and water and especially foils in a new way. And for people that have bought SUP’s or have never experienced wind sports, this will give them a great transition into windsurfing.

In all honesty when we started wing surfing I said it was a lot of fun and would very likely catch on… but the rate of growth recently has taken even me by surprise. The learning curve is very quick and the appeal very broad. We have people doing it here on Maui that range in age from 10 to 75 years old. I have honestly not seen such a broad demographic of interest in any of the many sports that I have been involved with so far, other than maybe flat water SUP paddling. It is cool to see something that is so appealing to kids and teenagers, professionals from other sports, grandparents, men, women and everything between. 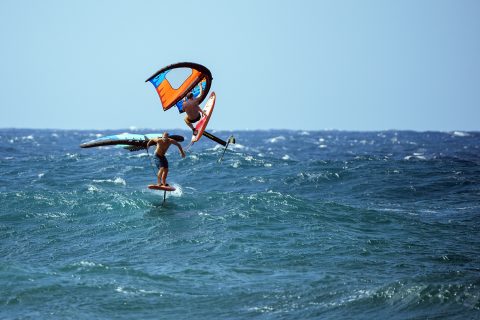 For me personally I am still loving it and learning something new just about every day. At the moment there is no better way to “mow the lawn“ than on a wing for me. And in flat water conditions, regardless of how much wind there is, riding the wing and a foil is engaging and fun. I was already winging a lot a year and a half ago… but I would say that I am doing even more of it now, both for fun and for development.

I highly recommend giving it a try, especially for windsurfers that do not have consistently good winds. Nothing beats windsurfing in the right conditions, but riding the wing and a foil turns lousy gusty winds and flat water into one hell of a lot of fun. It is actually easier to learn and get good at than windsurf foiling, especially as the wind gets a bit stronger, the advantages of riding with a wing rather than a windsurfing rig on a foil becomes quite substantial. I still love windsurf foiling…but there are only limited conditions where I would rather do this over wing surfing at this point. Hard to imagine… but true.

I am often asked what my favourite conditions are. I honestly like cruising in 15 to 20 knot winds. Even less is a lot of fun. You can ride with a bigger foil and just cruise and do transitions etc. But recently I have been focussing on speed in Maui’s summer time strong winds. And with a longer mast (95 cm) and a smaller foil (Windsurf 1250 or kite foil) I am now going pretty darn fast with amazingly good control. And we are only scratching the surface.

Again, I’m surprised at how fast things are taking off… but wing surfing is clearly here to stay and in my opinion is going to be quite big in the future. From cruising with friends to riding and jumping waves, to flat water jumping and freestyle to racing, there is a lot to come. And I’m stoked to be part of it. See you on the water!

Brands in this product guide: