Windsurf MagazineTEAHUPO'O: ALL OR NOTHING

TEAHUPO’O: ALL OR NOTHING

French Expat, Charles ‘Charliboy’ Vandemeulebroucke, has made Tahiti his home and the infamous break of Teahupo’o his local. He recounts a recent session there that broke his drought of sailing in spectacular fashion!

2020 was kind of a disastrous windsurfing year for me. The plan originally was to go for a full season on the IWT tour, a long time dream. Time off work was booked, board bags were packed and travels were organized. At the end of February I was due to go to Japan for the first stop and then Chile straight after. Then, two days before my first flight, Covid-19 arrived worldwide. Everything shut down and my IWT season was cancelled! 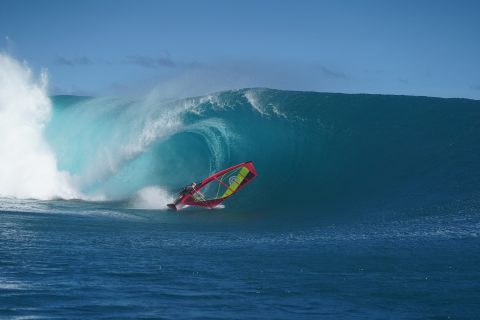 Dropping into a bomb

After a short, initial disappointment, I quickly realized that being stuck in Tahiti is not the worst thing in the world and many people were in a very worse situation. But the windsurf disappointment was just beginning. We got no more than ten sessions during the whole year in Tahiti and went into our summer time (December to March) with nothing under the straps. I was lucky to score a couple of rides at the start of 2021, but nothing more. So when we arrived at the beginning of the wind season around April, expectations were high. But then again nothing. The end of May was coming, we’d had a couple of big swells and it felt like, as usual, I might get a shot at Teahupo’o, but with no warm up session.

And so it was, on the 21st of May 2021, a massive swell was forecast with a good angled wind, but really light for Teahupo’o. Still doable … probably, hopefully! On a positive note, it was a Saturday, which could give me availability in the afternoon after work. Cause yeah, like normal people I work!

So at 12 A.M. I left the office, drove straight back home, didn’t even check the spot, took my Quatro board and only one sail, with no spare on purpose, because that is typically the kind of day where you get into trouble. And in order to save equipment for the season, as I have no way to go to Maui at the moment to get some new stuff, I didn’t want to give myself the opportunity to break more gear. Which turned out to be a wise move!

When I got to the lineup on my jet ski, my friend Gaël Vaast (father of pro surfing prodigy Kauli Vaast and best windsurf mate) was ready with his camera, “Go Charli, I take pictures.” He only has one sail left, so prefers to stay safe. The waves were bloody big and west, almost tow-in size. The sky was clear and the wind was well orientated, but light, really light. Just enough wind that makes you want to try and you won’t accept not giving it a go, but still not enough to be comfortable and is the most nerve-wracking scenario.

I didn’t take time to think about it too much, so I wouldn’t change my mind, and rigged my 4.7m Goya Fringe X Pro. As I hooked it up to my board I realized there were cobwebs in my footstraps … not a good sign! 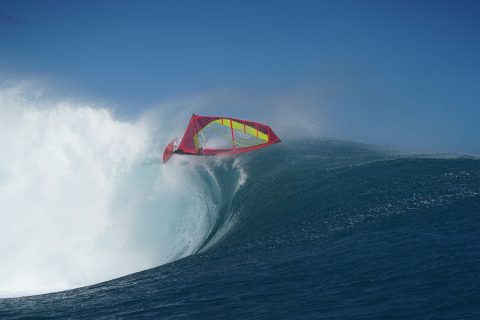 Not the best place to be!

There were only two surfers in the lineup, because of the high tide and wind, and a few boats in the channel to watch the show. They were all a welcome sight, as it gave me a good marker on the take off zone, and for windsurfing at Teahupo’o you really need to have a good idea of the take off and the channel zones to find your line.

I quickly got my first warm up wave to clean my gear of insects and dust! I then went out to find a good one. It was right at the peak of the swell with 3.3m @ 17 seconds forecast, but it was actually bigger … you could see only big lines all the way to the horizon. It was pumping and consistent. So I unplugged my brain and went for a bomb.

On my first attempt I tried to get planing as close as I could to the surfers, about twenty metres out from the take off zone, but it was not enough with this wind, so I tried to get even closer for another one and still didn’t make it. Then I got a last second turn around, literally on the top of the lip of a monster, and the vision was nuts. Standing with your gear four metres above the reef with pretty much your heels in the air gave me a few goosebumps! The game plan was to go for a surfer style take off technique… which means you need perfect timing to take off on the wave’s peak, pull on your sail and put your feet into the straps right next to the surfers with a wave already bending… pretty technical stuff believe me.

This was the one – big, west and with a little gust of wind to get on it. I almost air dropped the wave, but with no wind at all at the bottom of the face, my sail inverted towards me. I tried to get it the right way again by pulling on my back hand so the sail would fill and open. The boom reached my lower back at that point, which made the bottom turn impossible. I went a bit longer straight in front of the wave to get wind in the right side of my sail and went on the opposite rail with my toes.

That’s the moment where you have a look at the wave that has finally come alive and realized it is really west. I am now losing speed with no power in my sail – yikes!

I opened up the end of my turn to optimize my escape and gained a few metres that saved my equipment in the end. During the process I prepared to dive head first, below the sail, and at the right angle to penetrate as deep as possible, taking into consideration the size, speed, and position of the wave. The water slapped my face and ear as I pierced the surface and dove down. Then a few seconds later it was over and I began to come up. I was surprised and really glad that my gear and I had made it; I was safe at the surface with my equipment intact ten metres away.

I have to say at that point I felt like the best escapologist in Tahiti! Not the most glorious title I could dream of, but life saving that day! Then the second wave came, swallowed my gear in front of me and I swam back to the ski. Oh well, I nearly made it! 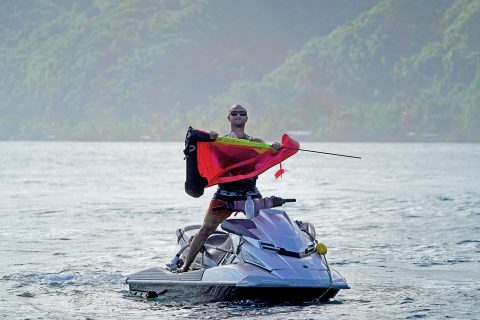 I went for a little jet ski ride over the reef to go inside the lagoon and pick up any pieces I could see. I found my board, base, extension and mast intact and together, all still rigged. The boom extension was split apart and there was just a little piece of loose material at the bottom of the mast to remind me there was a sail there before.

I looked for an hour all around for the rest of the sail with another friend but found nothing. The beast was hungry, she took her meal. She loves Goya equipment even more than I do, and likes it with a bit of salt and French meat. That was my thirty minute session after months of nothing. That’s Teahupo’o life …