What international events might go ahead this year is still uncertain, but it has been business more or less as usual in Tenerife for some of the world’s elite racers as they descended on El Medano for their winter training. Marco Lang and Lena Erdil give us the lowdown on their preparations.

Marco Lang – “At the beginning of the year I flew to Tenerife with a strange feeling, because I didn’t know what to expect. When I arrived in El Médano everything was actually normal, just like in previous years it was windy and very crowded on the water. The only difference to the years before was that you had to wear a mask everywhere.

The level on the water is insane. Almost all the riders in the top 10 of the PWA slalom train in Tenerife. We are all giving 120% on the water, as it would be in a final of a world cup event. Everybody is fast and can win races, but we will see at the first event of the year who has worked the hardest. For me there was no difference on the water compared to previous years. Tenerife is one of the best winter destinations for windsurfing, especially now with foiling you can be almost every day on the water, but normally you have 15-25 knots most days.

Racing is my passion and I keep on training and testing as competitions could start tomorrow, and if I take a break from training then I would lose focus. In these current times you don’t know when racing will start, and I want to be ready. 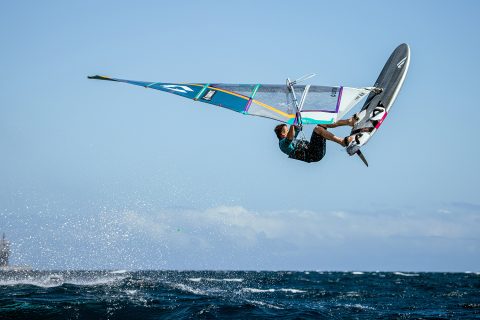 TWS (Tenerife Windsurf Solution) has been for the last few years one of my best partners. TWS offers us the perfect training setup to be fully ready for the PWA season. The centre is well organized and they offer the best equipment from almost all the brands, you can also store your own equipment just next to the beach with your sails rigged, all ready to go! 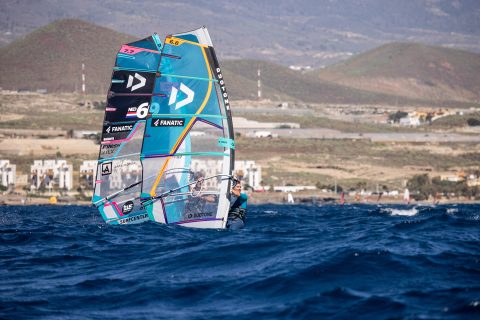 For two years we have been running a R&D loft specifically dedicated to building prototypes in Tenerife. Last year we had Kai Hopf our sail designer with four guys from Sri Lanka to make prototype sails at the loft, so that the Duotone team could test the prototypes on site. We made big progress, especially with the WARP_FIN and the WARP_FOIL, because we can try the prototypes on the race course and tune them as much as we can until we know we are ready to win a world championship title.

If you want to work with Kai Hopf you have to wake up very early! At 7 a.m. we meet in the loft to discuss our plans for the upcoming day. Often the wind starts early, so we can test the first prototypes in the morning around 8 a.m. Around 10/11 a.m. we start the TWS training and have three sessions, with five races in each session. Kai is always at the beach to make some small changes to the sails and so we can give him some feedback about the prototypes. The loft is working all through the day and after training at 4/5 p.m. we discuss the prototypes with the whole R&D team. 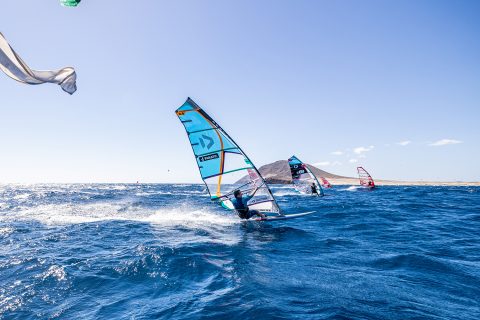 Since I am the chief tester of Duotone Windsurfing, my main focus is on product development. The main R&D work of the WARP, S_PACE and E_PACE happens on Tenerife. Since I am involved in the R&D of the freeride sails, I am super addicted to them and am always surprised about the range of use of the E_PACE. The 24th of February 2021, I will never forget that day. I had to test the E_PACE 6.6 and the TWS Pro Slalom Training was on, so I decided to join them with the E_PACE. At first I thought I will have no chance against the high-performance racing sails, but I said to myself that I will push as hard as I can and when in the first race I arrived in the top 4 at the first mark I couldn’t believe it. From that moment I was so enthused. With the Warp you can win world champion titles, but with the E_PACE you can win races too! 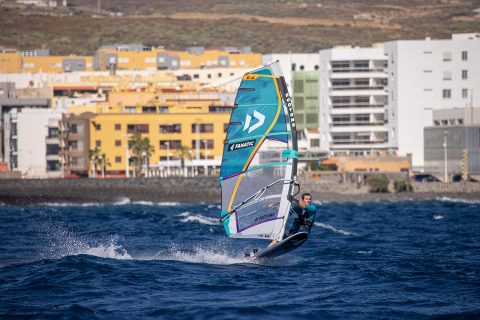 Maybe you don’t have the same speed as the Warp, but you have more comfort and it’s not that exhausting! In gybes I always gained some places and in the end I always finished in the top 6! I definitely missed the top speed, because you don´t have the pull effect like a racing sail, but I definitely had better handling, especially in the gybes. Speed is not always the most important point to win races. The E_PACE is definitely competitive and I have two goals for 2021 – another world championship title with our team and to be the first guy doing 40 knots with a no-cam sail! I already have had a few runs with my slalom equipment over 40 knots, but I guess I will sail somewhere in the south of France to find the right conditions for trying to go over 40 knots with the E_PACE and probably use it with the Fanatic Jag 94 for the attempt. 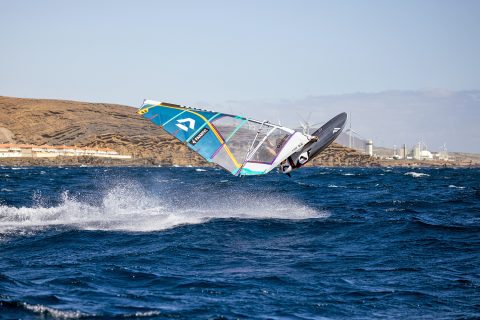 When we worked on the latest E_PACE prototypes our target goal was to increase the range of use, especially now with foiling. With the E_PACE you have two different settings. With the minimum downhaul you have a tight leech, which is perfect for foiling and early planing because you reduce the back hand pressure and the draft moves forward. If you change to max downhaul you will gain more back hand pressure and acceleration, because the leech is more open and it will help you to get more lift from your freerace or slalom board.

The E_PACE surprises me every single session, it doesn’t matter if you want to cruise around at your home spot, utilise a light wind breeze on the foil or race with the best slalom guys in the world! So if I have to choose one sail for the rest of my life, then it will be the E_PACE.”

Lena Eridl – “My Tenerife trip this year was quite a contrast to my usual hardcore slalom winter training trips of previous years, as this year the annual Starboard windsurfing photo shoot was organised to take place there with a small group of us – Matteo Iachino, Blanca Alabau Liam Dunkerbeck, Nico Prien and I. With Covid restrictions in place, organising a big team to attend was extremely difficult and a few of the team riders could unfortunately not make it.

Since I arrived from Lanzarote, where I had also been training, I did not have to do another PCR test, I just had to fill out some forms asking where I would be staying on my departure. Restaurants and coffee shops were open in Tenerife, but a 10 p.m. curfew was in place, so quite often we had to run to make it home in time. 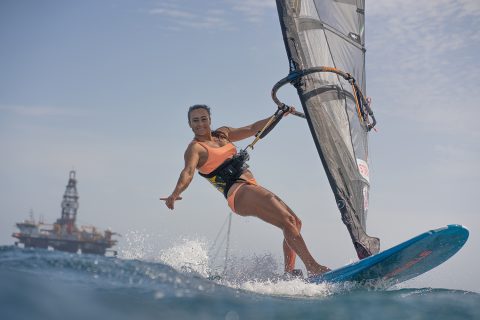 Since I was busy with the photo shoot and my main focus for training at the moment has shifted to iQFoil, for me the vibe was totally different. After 6 years of coming to do my winter training in El Médano, this year, thanks to the photo shoot, I actually sailed at quite a few other spots on the island as we were driving around exploring new locations and shooting all of the different spots available within a 2 hour drive from El Médano. 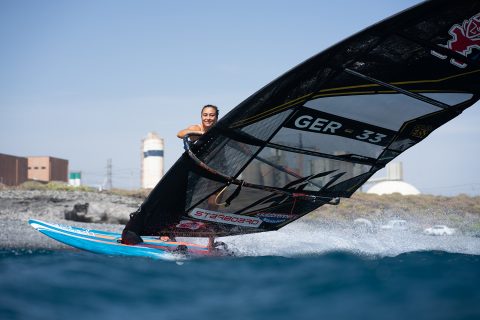 After the photo shoot finished I did manage to sneak in some TWS (Tenerife Windsurf Solution) slalom training with some of the regulars. It was great that Jenna Gibson had come over from Lanzarote to Tenerife too and we could race against each other on the slalom course again after quite some time! Going back to fin sailing after such a long period on the foil always feels a bit strange at first, but racing for me is the best part about slalom sailing, so I loved being back on the starting line and having some good competition to battle it out with. 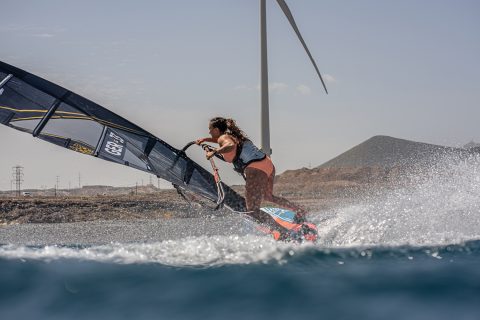 A real live racing situation is some of the best training you can do as a racer. Because even if on your own you have a great top speed, this is worth almost nothing if you are two seconds behind at the start line due to being rusty with your timing. You will be in the bad air and water from the rest of the fleet and the race is already pretty much done. And even if thanks to your speed you make it to the mark in first place, if you then leave lots of space while gybing, someone else with a tighter gybe is probably going to overtake you. So speed is important, but to race well, you first need to learn how to start on a proper starting line and how to gybe. So my tip here is to try and organise a little group of racers at your local spot and motivate each other to practice gybing around a mark or starting next to a mark.

My training program is mainly focussed on iQFoil at present, so when I was on my slalom kit my priority was to have fun and as an added bonus I got to test my new 2021 AC-1 Point-7 race sails. It’s great to see how Point-7 racing sails are just getting lighter and better each year. 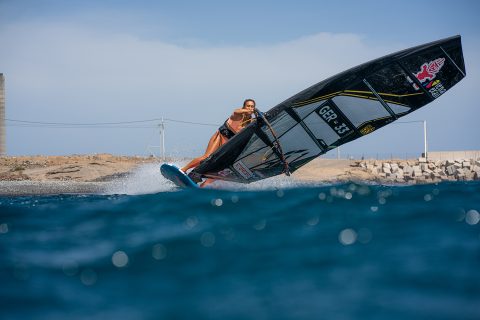 Lena Erdil laying it down

My standout moments from the trip were racing with the slalom foilers while I was on my normal slalom kit! It’s a bit scary, but also super exciting and you definitely do not want to be overtaken by someone on a foil when you are going flat out on your fastest kit!

It’s interesting to see how much potential there is in foil racing and how things are changing quickly. Bigger wings and fuselages make tight jibes quite difficult, but smaller wings and fuselages allow tighter gybes by good foilers, which has an advantage round marks, so it’s about finding the balance in performance. An advantage a foil board has is that unlike a normal slalom board that can stall easily in gybes if your technique isn’t perfect, the foil will glide right through.

For me slalom is all about competition and competing, and with 2021 slalom events uncertain, and the opportunity of training for iQfoil competitions available, I just decided to switch my focus to this. I’m learning a lot in this new discipline and I have always been a big believer in transferrable skills and the importance of being an all-round good windsurfer. Course racing was definitely missing in my repertoire, so I’ve been using the last year to change that. I am super excited that the German sailing Federation have selected me for the German Sailing Team and I now have the opportunity to train with a coach. I really look forward to making the most out of this opportunity and the first iQfoil races of 2021.”