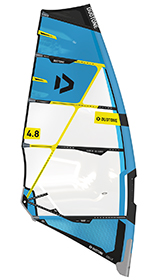 OVERVIEW
Classed by Duotone as the “ultimate bump & jump or power wave sail”, the Super Session appeared on the scene last year, offering a very different proposition to its stable mate, the Super Hero. Developed specifically for the freewave discipline, the centre of effort (or ‘sweet-spot’ of the sail’s power) was moved forward and higher in the draft, encouraging the rider into an upright stance over the board, whilst bestowing the sail with light responsive handling. We were very impressed by the first incarnation, stating that it provided a performance “as clean and refined as its appearance”. Under its new Duotone branding, the Super Session has undoubtedly become more peacock-esque and busy in its appearance, yet its dimensions remain unchanged. It boasts plenty of detailing throughout its panels, be it rigging guides, neat little material touches or graphic placements. For example, there’s a new little length of webbing stitched around the front of each batten pocket, we assume to provide extra wear resistance. The standard version tested here is monofilm heavy, with all bar the tri-ply foot and x-ply clew panels being made in the film. Alternatively, you can opt for the HD version, which amounts to a monofilm-free version for £50.00 more.

BRAND CLAIM
“Freewave and Bump & Jump have everything that makes windsurfing so fascinating. This explains why this class is so popular. SUPER SESSION is the perfect sail for this, covering the wide range between flat water to waves.”

PERFORMANCE
Rigged on a 430 cm Platinum RDM, the Super Session has relatively little luff curve, the visual trimming guides in the top panel helping to gauge the amount of tension to apply, whilst both bottom battens retain plenty of rotation around the mast. The high and forward position of pull combines with the large amount of excess play in the luff sleeve, allowing the sail’s draft to expand and breathe superbly under pressure. In doing so, it provides plenty of leverage for useable feedback, the elasticity and power surge response during pumping allowing the Super Session to push the board onto the plane in the lightest airs. It is certainly one of the best for making the most of marginal conditions, accelerating positively and gliding through lulls well. But the best asset of the Super Session is its light, balanced handling when going, feeling active and ready whilst pulling the rider over the board and into a upright position. Power delivery is exact yet controllable, feeling honest and responsive without being too forceful or pulling the unexpected rider to their toes. It is a real gem for making the most of tricky onshore wave breaks, yet has the composure to be useful in a number of other manoeuvre roles from freemove cruising or bump and jump and even for freeride foiling (its upright stance making it particularly relevant). In mid-transition the eased out Super Session returns to become neutral in the hands, the battens pushing back round the mast to reduce the power levels, before rotating effortlessly. And if the wind increases, there is enough tuning range in the Super Session to save any blushes, the hollowed out lower leech seemingly eliminating any chance of flutter. Top end stability is fair, yet the Super Session’s true callings are lightness and the ability to generate bottom end power, so change down sooner and capitalise on the pleasure of using a smaller sail.

THE VERDICT
Light and crisp, yet surprisingly powerful, the Super Session delivers the energy and punch to make the most of any manoeuvre-oriented environment, with the tuning range to stabilise in variable winds.