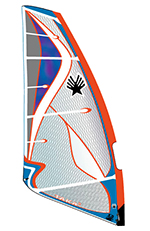 OVERVIEW
The Taka 2 comes into the Ezzy range to replace the Taka of last year, incorporating a refined foil shape and, most noticeably, a three-quarter length batten above the boom. Easy to rig thanks to Ezzy’s usual attention to detail and rigging guides, it sets with a massive amount of shape in the profile throughout its downhaul range, coupled with a fold in the luff panel material between the second batten and bottom one. As such, the theory is that this cut allows the sail’s draft to breathe and go more neutral during transition, before filling once again to provide power. Comparing the Taka 2 to other sails in the test, it has minimal luff curve, yet a large tuning range, with two minimum downhaul settings (the most extreme being for ‘float and ride sessions’ we presume) and masses of play in the outhaul.

BRAND CLAIM
“I want a sail that is full and powerful in a straight line but also flat and neutral during tricks, wave rides, and transitions. The Taka 2 gives me the manoeuvrability I need without losing stability. I love the Taka 2.” Graham Ezzy

PERFORMANCE
With the four batten Elite present in the Ezzy range for some time now, delivering such a strong dependable performance, it is no wonder that David Ezzy has looked to challenge convention in other ways. On its second minimal setting, the Taka 2 offers a staggering amount of bottom end drive for its size, the extent of which can be fine-tuned superbly on the outhaul, synonymous with all modern Ezzy sails. It has a springy, yet balanced nature, and can be used to great effect for pumping the board onto the plane. In transition, the sail’s profile instantly shrinks back as the power is eased off, feeling light and easy for repositioning, before powering up quickly once on the new tack. As the wind increases, the Taka 2 can be re-tuned with more downhaul and outhaul to reduce the depth in the draft of the sail. With its reduced luff curve and batten count, the sail’s stability relies on the structure and shaping sewn into its panels … and we have got to say, it works. The three-quarter length batten eliminates any flutter, whilst the Taka 2 remains balanced, despite the power building in the hands. But the best way to understand the Taka 2’s true appeal is to think of it as challenging the current parameters of a sail’s useable wind range. This 4.7m, for example, should really be tested against conventional 5.0m sails … maybe even 5.3m sails. It is within this lighter wind range that the Taka 2 shifts its handling credentials right to the top of the pile against the competition.

THE VERDICT
The Taka 2 is another quality product from Ezzy, and sits neatly next to the Elite in their range. It is best suited to those with a true passion for wave riding and manoeuvres and sailors that often prefer rigging a sail size smaller than most others on the water.