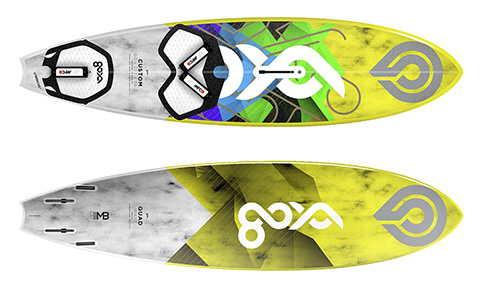 THE LOW-DOWN
New for 2016, the 96 is the third largest in an expansive Custom line up of seven boards, spanning from 68 to 116L. Championed by Marcilio Browne, it is an eye-catching design, with a low pointed nose, a wide point well forward of centre, narrowing quickly in the tail to finish in a swallow tail. There is a pronounced mono-concave throughout the board, with plenty of rocker flat in its mid section, whilst the rails in the tail are incredibly sharp before exhibiting masses of tuck in the board’s shoulders. Lots of interesting concepts rolled into one board… There is plenty of dome to the deck for good measure and the fittings provided are quality MFC as we have come to expect.

BRAND CLAIM
“Over the years we have encouraged everybody to get into bigger board sizes. This new line is our response to the very demand we have pioneered. Fresh tail shapes evolve through the line, starting with smaller crescent tails, growing in width into the middle of the range and turning into squash tails for the two big shapes. Standing only 6” from the tail creates a geometry that allows you to ride the Custom like a surfboard. Shorter outlines, straighter stance rails and narrower tails define the dynamic of these sticks. Concaves run throughout the bottom in ever changing geometry, allowing you to accelerate toward the pocket with no resistance.”

PERFORMANCE
Despite its quoted volume implying the Custom is the largest board in the group, it certainly doesn’t feel out of place in this group. In fact, it feels small and compact underfoot and being the only quad set-up here, does need to be turned well off the wind to release, using the hull’s ability rather than any lift from the fins. Nevertheless, once mastered, the mono-concave can be used to good affect, and the board does release early, gathering pace well and adopting what can be perceived as quite a gunny stance with its low domed nose hovering over the water. The fittings are excellent (albeit the straps set on the large side – we normally have to make straps bigger, but these were fine), the board being very comfortable underfoot, and the ride over harsh chop was surprisingly tempered for a board with such a mega mono concave throughout. It also glided through lulls incredibly well, and could track upwind with some of the best in the group, although you have to learn to use the hard rails in the tail of the board rather than load the fins too much. The Custom has the speed, comfort and composure to be used for aerial antics, but it really distinguishes itself from the group when you use it on the wave face. It has definite back-foot bias and demands a different approach to many boards here. If you try to push through the front foot, the Custom struggled to grip and tram-lined forwards instead of round the corner, such is the tuck in the front section of the rail. But get the balance on your feet right and the Custom delivers such a phenomenal amount of grip that the sensation can’t help to inspire. Its response is instantaneous and bite so pure and smooth, yet it holds its speed easily throughout. There is no question of its credentials– it is a wave board in the purest sense; to be used in any other environment would not do justice to its potential.

THE VERDICT
Brawzinho’s signature board, displaying all the new-school qualities you’d expect from a board at the cutting edge of development. Demands a back foot bias style of riding, yet rewards with staggering levels of grip as it charges through turn after turn.