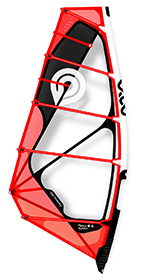 OVERVIEW
The Nexus remains in the 2019 Goya Sails lineup as their 5-batten freeride contender, described as the “best choice for power, speed and manoeuvres in conditions ranging from flat water to bump and jump”. Available solely in red and black for this season, it can be rigged on either an SDM or RDM, being tested here on the latter. With the same dimensions as last year’s version, the design emphasis has been to improve top-end control and range, without losing any low-end grunt. The considerable downhaul tension required is easy to ascertain, thanks to the visual dot located at the end of the top mini-batten. With more luff curve than any other sail here, the skin in the Nexus’s luff panels is drum-tight, its leech falling away progressively along its length whilst plenty of profile is locked forward in the draft. There’s real quality to the precision of the set achieved (with not a single crease present) and the materials used throughout the Goya’s panels. Some features are primarily for function (such as the carbon stretch control tendons extending from the titanium ring clew eyelet, and the rip-stop material used in the luff sleeve), whilst others give an extra sense of finesse, like the extended moulded tack fairing and leech reinforcements at the end of each batten. There’s a large monofilm window for improved visibility, x-ply scrim in the foot panel to improve durability, and an x-ply / Dacron hybrid luff panel to achieve the desired power delivery.

BRAND CLAIM
“The heart and soul of freeride windsurfing is realised in the Nexus Pro. Excellent low-end power, stability and easy control, blazing speed, big jumps and hard carving manoeuvres, the sail will deliver beautifully on all of the above.”

PERFORMANCE
Crisp and poised at rest, the Nexus powers and accelerates quickly when a gust hits, the pre-shape in the sail complimented by the movement in the luff sleeve, enabling the profile to deepen in an instant. Feeling sharp and precise in delivery, the sail is alive in the hands, with just enough flex and breathability in response so that it isn’t jarring, bestowed by a slither of Dacron in the luff panel. The centre of effort in the Nexus is low and forward, helping to pin the board down and maintain control in challenging waters. It has a definite freeride / blasting nature, the long boom, low-cut foot and dropped clew eyelet encouraging the rider into a comfortable, locked-in stance. Once in this position the rider really begins to feel invincible, the sail actively accelerating through every gust, whilst gliding efficiently through prolonged lulls. It is fast and efficient on every point of sail, the balance and precision in its power-transfer giving the confidence to cover distance and explore. Just as we remembered last year’s Nexus, its character is so dependable and focus so definite that you always know where the power is coming from. You could pretty much define its location with the sharp end of a pin! It doesn’t go as light or neutral in the hands during transition as others do, yet the stability is always there, allowing the rider to time everything without the sail reacting unpredictably. In over-powered conditions, there’s the option to fine-tune the power delivery on the outhaul and the Nexus will keep going long after it’s rational to change down sail size.

THE VERDICT
Punchy and precise, the Nexus offers crisp yet manageable handling, combined with efficiency and speed for exciting blasting across any terrain.