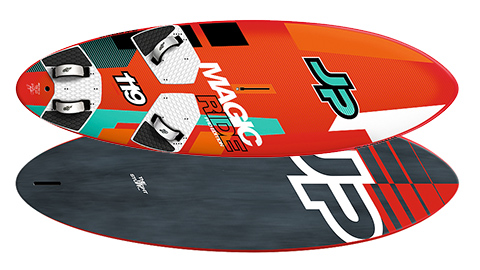 THE LOW-DOWN
The 142 is one of four new shapes in JP’s Magic Ride line up, and defies the general consensus within large freeride design of going super wide. At 81cm wide it is easily the narrowest on show here, whilst also being one of the longest. With a stated bias towards “forgiveness, comfort and ease”, it has a very distinct outline, the wide point just north of the board’s mid-point before tapering quickly into easily the narrowest and thinnest tail in the group. The deck is domed throughout and there is relatively little rocker, the nose remaining low all the way to its pointed tip. With dual density deckpads, lots of footstrap insert options (including training positions) and a large 48cm fin supplied (in G10 with the Pro model), the Magic Ride is available in three different technologies to match varying budgets.

BRAND CLAIM
“The newbies are narrower with a straighter outline improving ease of planing and directional stability and speed, flying over chop smoothly and effortlessly.
The new modern freeride boards perform better in all aspects than the first generation. But they really excel regarding ease of use, accessibility and maneuverability. Overall, they are so balanced in every aspect of sailing that you wonder why you would ever want something different. Here’s more magic!”

PERFORMANCE
On the water the Magic Ride was a popular board amongst the testers, with an effortless almost innate ability to plane and a smooth comfortable gliding nature. With plenty of stability underfoot, it tracks forward easily and requires little redirecting off the wind or input from the rider before it releases from the water and accelerates. Its manner is very easy and controlled – it feels comfortable without being dull or dumbed-down, and reaches a respectable top speed, the fin providing excellent traction, never hinting that it will let go. But it was the Magic Ride’s gybing agility that really caught our attention. Turning into the corner, the board bites easily, the low shoulders of the board helping to engage a long length of the rail without much persuasion. The thin narrow tail then comes into play, enabling the rider to really sense the traction and vary the carving angle – push harder and the board can be driven through an ever tightening arc, whilst maintaining its speed effortlessly, right through to the exit. It is impressive for a board of this size and certainly kept us captivated, inspiring some old school carving freestyle from the ‘Ministry of Funny Gybes’ handbook. A great tutor and with enough life to entertain the more experienced pilot, the Magic Ride has plenty of rider appeal.

THE VERDICT
The new Magic Ride does its name justice, finding its niche as a practical tutor yet with the sweetest of gybing abilities, making it a lot of fun for the more experienced rider alike.