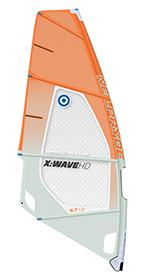 OVERVIEW
The X:Series is a new concept within the Neil Pryde range, sitting alongside the brand’s ‘Core Series’ of familiar sail designs. The idea behind the X: Series is to provide a range of three sail styles, based on the Combat, Fusion and Ryde of last season, yet using more conventional ‘industry standard’ construction techniques to keep costs down. The X:Wave is classed as the ‘all-round wave’ option and replicates the 2018 Combat in both layup and brief. Tested here on a 430 cm RDM, it can also be used on a 400 cm mast and sets with a moderate amount of depth to its draft, the bottom battens retaining plenty of rotation around the mast. The only four battened sail in this test group, it has a definite wave-sail outline, with a high cut foot and relatively high clew position. And whilst it may not possess the brand’s innovative laminates such as Powerfuse, the features on the X:Wave leave no doubt of its loft origins, boasting the same quality components as its dearer Core Series counterparts, such as the integrated batten tensioners, the tack roller (with integrated clip) and padded tack fairing.

BRAND CLAIM
“We put a lot of effort into the development of this new sail and the entire X:Series, that’s why we are convinced that they will work perfectly for years to come.”

PERFORMANCE
With just four battens and relatively little luff curve to its structure, it came as no surprise that the X:Wave was wonderfully light in the hands at rest. As power comes on, the movement in the luff sleeve and active response in the mast provide a very useful amount of feedback and flex, allowing the sail to be pumped effortlessly, driving power into the board below. There’s an obvious elastic limit to the sail’s luff panel, giving the handling a crisp and on-off nature. The centre of effort is high and forward in the draft, pulling the rider into an upright stance over the board, the leech twisting smoothly without a hint of flutter. As a gust hits, the sail accelerates further in the hands, its efficiency and speed coming as somewhat of a surprise for such an upright stance. This bottom end power, light handling and speed make the X:Wave a fantastic proposition for light wind freeride foiling, providing the early input before being capable of keeping up as the foil’s power provision takes over.

In transition the X:Wave feels fun and playful, re-familiarising you that it’s an oversized wave sail. It inspires you to enter manoeuvres or try something new – a great plus for making the most of less than ideal conditions. It would certainly fit well in a wave-sailor’s quiver as their light wind float and ride option, safe in the knowledge that its top end stability can still be called upon if the conditions change. And that is the real headline to take away from the X:Wave in 5.7m. Whilst undoubtedly more manoeuvre than blasting oriented, its stability and range are certainly no embarrassment, despite its four batten structure. In this size and style of sail a four batten design would be inconceivable just five years ago, but with developments in seam shaping and materials continuing to push the envelope, sails such as this X:Wave may well become increasingly popular.

THE VERDICT
Light in handling and efficient in nature, the X:Wave has gone a long way to proving that four battened sails are worthy of consideration in this size and job description.