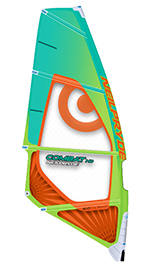 OVERVIEW
The Combat remains in the Neil Pryde line-up for 2016, fulfilling their ‘all-round wave’ role. Used by team riders such as Robby Swift and Leon Jamaer throughout their World Tour competitions, it is designed to be versatile enough to handle any wave environment. Available in standard construction or HD (as tested here), it can be rigged on either a 370cm or 400cm mast, and was tried on both during this test. Rigged on either, it sets in a similar fashion, yet with a slightly fuller shape forwards in its profile when used on the 400cm mast. There is also a good tuning range on both, the leech falling away progressively under increased tension whilst the bottom two battens retain rotation at all times.

PERFORMANCE
Used initially on a 370cm mast, the Combat had a soft and smooth power delivery, feeling quite flexible and balanced in the hands. In stronger winds this set up worked well, the leech loose and twisting progressively whilst the stability remained locked forward. It did seem to lack some bottom end punch that we were expecting from a Combat, so we tried it on a 400cm mast of the same ilk and the difference was immediately apparent. Setting with more profile forward in the draft and a tighter leech, the Combat instantly feels more crisp and direct. The centre of effort is quite high and forward, encouraging the rider into an upright stance without pulling them to their toes with every gust. Whilst possessing a good natural range on one setting, there is also a lot of tuneable range available, the Combat retaining its shape low down as the leech opens under more loading. The feedback provided in the hands is balanced and constantly present, rather than going super light or neutral during transition. Its dependable nature makes it a true all-round contender, for use in any wave environment, whilst its tuning potential means the user can fine tune the power delivery to suit their style or the conditions. And it has got to be said, in our opinion, the Combat is also one of the most distinctive and attractive sails on the water in this colour scheme.

THE VERDICT
A super dependable powerhouse, the Combat offers masses of tuneable range to meet the demands of all riding styles and conditions, matched with the visual appearance to get noticed.