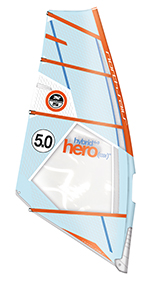 OVERVIEW
The Hero Hybrid is North Sail’s dedicated wave sail, the ‘hybrid’ in the name referring to the newly incorporated ‘Switch Batten’ that can be withdrawn from the second pocket to change the sail from a 4 batten layout to a 3-batten option, for “increased handling and early planing in very light winds”. Designed solely for use on RDM masts, it was rigged on a 400cm and displayed moderate to little shape in the bottom batten, whilst being dead flat in the battens above the boom at rest, the leech twisting off progressively. That said, the Hero’s luff curve is one of the straightest in this group, and there is lots of movement in its leading edge.

BRAND CLAIM
“On the water it immediately appears that your backhand is the throttle, just sheet in then the HERO HYBRID immediately builds up power, speeds up and gets you going. On the wave it becomes a discreet engine always ready to accelerate when needed. The top of the sail works very effectively to support the power, therefore you can safely choose a sail size
smaller than many other wave sails. This applies to almost any rider, regardless of their weight.”

PERFORMANCE
With its unique appearance and set on land, it wasn’t surprising that the Hero also felt incredibly distinct on the water. Super light and neutral at idle, due to its shallow draft, the slightest gust of wind and the Hero’s profile swells massively, thanks to its reduced luff curve and bags of movement in its leading edge. Flexible and springy in the hands, it fills to adopt a deep profile, generating an impressive amount of useable bottom end power in the process. The extent of the draft’s stretch is undoubtedly helped by the distance between battens 3 and 4, allowing the Dacron in the lower luff panel to breathe freely. As a result, the power delivery is soft and comfortable whilst the centre of effort moves to a low and slightly back position, feeling stable and equally balanced in both hands. This softness in the delivery also makes the ride over choppy seas pleasant and relaxed, allowing the rider to pick their path, or stand up over the board, easing out to reduce the pressure. Its easy on-off character makes the Hero a great deal of fun on the wave face, providing the power to drive through the bottom turn before going amazingly neutral and weightless as it is eased out, providing the time to reposition for the cut back. We did try the Hero in its three-batten mode, taking the ‘switch batten’ out, yet didn’t feel it particularly necessary due to the Hero’s already excellent handling; nor did it possess any real benefit in the UK’s typically gusty conditions. As the wind increased we were also pleasantly surprised by the Hero’s stability (in four batten mode), which, although becoming more backhanded, didn’t render the ride uncomfortable or the sail unruly … although we would certainly be changing down sooner than on a conventional five-batten wave sail.

THE VERDICT
With its super smooth on-off handling and soft, powerful bottom end potential, the Hero has masses of user appeal, from a forgiving tutor for the novice to a wave riding weapon for the experienced sailor.