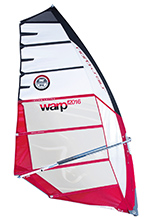 OVERVIEW
The WARP F2016 is North Sails Racing Series sail, so is a little ‘off topic’ in this twin cam test. It is, however, included for two very relevant reasons, the first, most obvious, being that the S_Type SL 7.8m (which incorporates a ‘Switch.Cam.Option’, converting it to a twin cam), was tested during last month’s issue. The second, more interesting reason is that we often get asked by recreational sailors whether top end race sails are worth considering. Are they within reach for their ability? So since last year’s WARP F2015 9.0LW was the talk of the town, turning heads on the PWA Slalom scene, we thought it worth investigating. The secret of the 9.0LW was a feature North are calling their ‘No.Compromise.Design’, which has been incorporated throughout the WARP F2016 series. By using a lower-stretch material in the luff sleeve, and a Kevlar strip at the sail’s leading edge, North’s sail designer Kai Hopf has been able to reduce luff curve tension and leech looseness without compromising stability. In addition, he’s been able to build in extra depth to the sail, boosting bottom end power that flatters the reduced tension, making for a softer power delivery. North call it “power made manageable”, so it would be a worthwhile addition to the test to see if their claims of ‘freerider accessibility’ stand up.

BRAND CLAIM
“The ultimate World Cup Slalom sail is radical, incredibly fast and uncompromisingly designed to win. The integration of the newly developed NO.COMPROMISE.DESIGN remarkably improves planing and acceleration after starts and gybes, but without becoming physical to sail! That allows you to reserve energy over the entire racecourse and to keep a clear head for tactics. Combined with the unrivalled soft camber rotation, the new WARP F2016 therefore is not just the first choice for World Cup riders but for aspiring freeriders alike.”

PERFORMANCE
Rigged on a 460cm Platinum mast, the WARP is straightforward to rig thanks to North’s excellent Hyper.Cams, which pop onto the mast easily once the right tension is applied. Requiring no more effort to downhaul than any other sail on test here, it sets with less loose leech than you would expect of a World Cup sail and features only one VTS marker in its second panel. Its large luff sleeve disguises the fact that the WARP has quite a deep profile, yet requires no outhaul, such is the forced structure of the leading edge. On the water, the WARP was quite a revelation. Light and balanced in the hands at idle, its wing-like form leads you to believe it will feel stiff and rigid, demanding that pressure builds before it really generates any useable feedback. But when you try to pump the WARP, it responds with useable power, the mast noticeably flexing and giving life to the sail in marginal winds. Accelerating purposefully, the faster it goes (and there is seemingly no limit other than the board … or the pilot it is partnered with!), the lighter it becomes in the hands. It is a dream to use – locked in, with enough softness to provide comfort and safe passage over chop, and the sort of slippery efficiency that has become the domain of high-end cammed sails. You can’t help but be inspired, hunting for gusts to generate more speed to match your growing confidence. In transition the sail feels light and easy to reposition, the cams rotating smoothly before the power returns with its soft delivery. And if there’s a lack of power on the exit, you can then use the WARP’s trump card and pump it effectively to generate the drive…

THE VERDICT
Scintillating speed and efficiency with light handling and manners, North’s WARP brings World Cup weaponry within reach of the common market. What price do you put on the pinnacle of performance development?