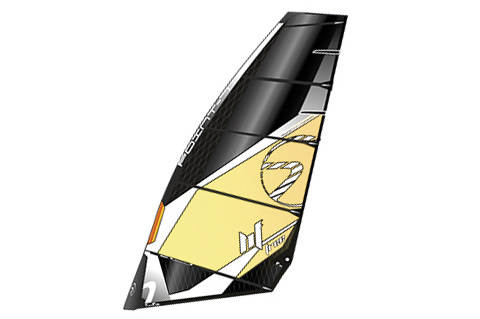 THE LOW-DOWN
The HF (for ‘Have Fun’) is Point-7’s ‘classic freeride’ offering, sitting in between their mega-grunty race and freerace lines and [also mega-throaty] wave line! The foot’s cut quite low for crossover use and the general build is quite light with low-end power and easy handling in mind. Point-7 have tried to keep things nice and basic and good value here and although there’s just one clew cringle option and a lot of film involved, the rest of the specs are rudimentary but effective. (Such as the solid tack fairing for example.) We also liked that the specs were printed on both sides for when rigging and tuning.

BRAND POSITIONING
‘Keep it simple, and make it good. The HF features a very light construction, early planing, easy handling and demands very little of its user to work optimal. The HF is the ideal choice for the beginner to intermediate windsurfer as well as for the windsurfers who are looking more towards easy handling and light wind qualities over high wind performance.’ (Sic.)

PERFORMANCE
Although the film build’s nice and light, it’s also very stable and fills well for early planing power. The profile makes for a sensation somewhere between a crisp monofilm feel and a slightly softer ride, largely we thought down to the forgiving batten stiffness. There is a good turn of speed here and some acceleration quality when reaching and heading slightly upwind. It’s in the moves that the light weight plays another main role with a featherlike feel in the hands during transitions which will suit improvers looking for a balanced, un-inhibiting behaviour when cracking carves or mastering tacks. Regarding top end, there are better performers in this group, but, as we mentioned in the introduction, the upper limits of most of this selection from the modern crop of crossovers has really gone to a new level and the HF displays good behaviour right to the higher edge of the ‘traditional’ wind range window. Over 27 or so knots there was some flutter from the film, especially upwind, but to span 14-25 knots or so with one sail is pretty darn good anyway, plus, in relation to intermediates, the high 20s is probably not the time to select a 6-metre sail regardless. As a crossover sail the HF is probably limited in the wavesailing department, but for everyday bump ‘n jump and freeride blasting you can’t go wrong. All in all, when you cost in the attractively-priced masts, the HF represents very good value for money as a potential rig package pick.

THE VERDICT
A light, easy to handle and extremely good value-for-money option for entry-level freeriders and moderate-to-strong wind blasting. The film construction and batten profiles deliver both stability and some forgiving spring. Superb pick for first-time gybers.