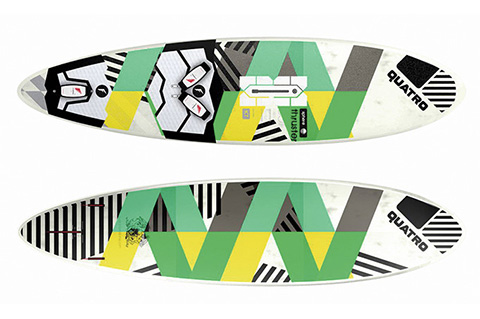 THE LOW-DOWN
The Sphere 95 sits midway in a 7 board range from 75l to115l and comes with US box 19cm center fin and a pair of 10cm thrusters.

BRAND CLAIM
The Sphere is a toned down version of the Pyramid. Now, wait a second, what do we mean by toned down? Make no mistake; this board is actually much faster and pushier than the latter. Where the Pyramid loves hollow barrels, the Sphere will excel and destroy any kind of wave you may encounter. And not only will it destroy, it will hover above said wave in slow motion, airborne, until the damage is done, because that’s what it’s made for – collecting speed and releasing it in breathtaking wave riding maneuvers.

PERFORMANCE
The Sphere felt the longest and narrowest here, coupled with a (relatively) small fin set up which knocked it back in the early planning stakes for some of the crew. Take a little bit of time to get accustomed to the rocker line and refine your weight distribution to unlock the early zip that comes from light and precise technique. As our playground was short on umph a bigger center fin would have undoubtedly helped the over 85kg chaps. However a brief spell of a little more power from the conditions started to reveal where the Spheres qualities firmly lie. Up at the harbor wall the occasional 3ft peak would pop up for an instant, and when it did, more likely than not we would get in there for a decent hit. This is where the width and length of the Sphere show a somewhat different approach to the squatter hulls as it never feels like it’s becoming “big”. What we think Keith Taboul is getting at is the board’s ability to hold and fire on the wave, accelerating up though the gears like a demon as you unleash it. Its great fun to cruise around, seeking out the rides to pick and attack. Its a subtly different style of sailing compared to their 98L “magic carpet”

Cube we tested in 2014 guise last year which is around 2cm wider throughout and thus has a bigger feel than the Sphere. Great as a lightweights board that won’t feel too big in hurry or a big guy’s universal ride.

THE VERDICT
The sharp looking Sphere has a lot to give and will reward time spent learning its ropes twofold. Its nimble in the small surf encountered here, riding with a very connected positive feel. A good balance of loose / drive performance that will get you grinning. Requires a light touch in these soft conditions.