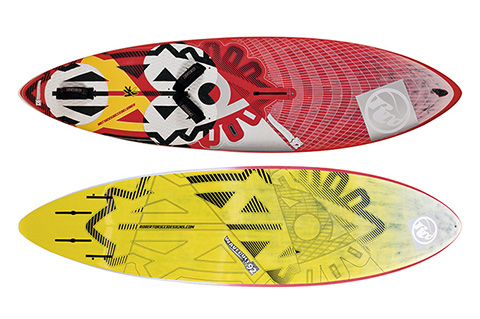 THE LOW-DOWN
A conservative colour scheme by RRDs standards in this size of fifth edition wave cult quad. It’s a glossy bottomed hull with a pair of MFC Pro –flex 17cms in the back and 8’s in front.

BRAND CLAIM
The new shapes of the wave cult V5 incorporate the latest development of our hi- performance sailboards line: wider body boards that are easier to use, more stable, planing earlier. This main feature (wide body) might seem in contrast with maneuverability, but when you actually work with a thinner rail profile, increased rocker and tail “V” then the whole right equation for performance level is achieved again with the good additions that the extra width will bring. A magic new formula that will improve the amount of sailing days in waves.

PERFORMANCE
We had a positive experience of the 83L wave cult V5 for our 2014 wave test last year, so we thought we had a good idea of what to expect from its bigger brother but were even more impressed with the performance of the 92. Jem hall had already set this one up and as with the 83, advocated a narrower stance to get the best out of it. We were two screw holes back from the most forward position and two from the rear. The effect being that you stand tall, well over the board ready to react and turn quickly. The fin box configuration allows the fin set to overlap the front and rear pairs for superfast tight turns. We set these further apart as Jem and John Skye advised to allow a more steadily progressive and variable carving feel. John Skye recently used this particular model in the Cold Hawaii Klitmoller PWA Wave contest and choose to set it as a twinser for the lighter, bang on-shore conditions that prevailed in order to get a lighter freer feeling that won’t grab at the chop and hinder your flow. In these Medano conditions the quad set up was good and the Cult felt quite at home popping straight up onto the plane with little need to bear-away or muscle the rig with a free feeling on the fins. Its upwind abilities being good enough to take us up to the wall without it feeling like a slog. The hull feels alive and on the wave it naturally encourages a more surf oriented style that delivers plenty of endorphins as you carve more than skate your way from bottom turn to lip. Breaking the fins out off the top is entirely your decision and not the inadvertent result of putting them there.

THE VERDICT
With a low energy, passive planing feel, the 92L Wave Cult is a refined all-rounder with more than just on-shore performance on tap. The wider, thinner -railed hull and kinked-in tail help you turn where you want, tight or wide arc with a fast reacting surfing feeling. Easy to plane and easy to ride the Cult will endear itself to many.