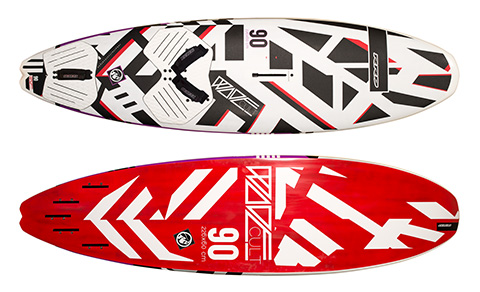 THE LOW-DOWN
The heritage of RRD’s Wave Cult is to produce a versatile board for use in a variety of conditions and this sixth series is no exception. Available in four sizes, (the 90 tested here being the second largest) and two construction options, it packs five slot boxes into its tail so that it can adopt a variety of fin set-ups, albeit being supplied as a thruster with MFC TF side fins and an 18cm G10 central fin. The wide spread of plug options for the front straps also gives an indication of the wide user appeal intended for this board. Dressed in a distinctive graphic across its domed deck and polished hull, it certainly looks the part, mimicking the boards used by new signing Alex Mussolini.

BRAND CLAIM
“With so many thoughts it’s hard to say which was the key decision along the way, though if pressed I’d have to say starting with a blank sheet opened the possibility to analyse and re-think what the perfect wave board you’d use every day would look like. We were influenced by a new line of short boards that appeared to have their nose and tail cut off, it’s what we now call the COTAN board (Cut Off Tail and Nose).While we found lots of innovative inspiration, going for a radically shorter length and accompanying wider tail and nose we were limiting the “all-round” nature of the board which is a key feature of the Wave Cults.”

PERFORMANCE
Whilst certainly not a stubby, the cut-off nose and what RRD are calling their ‘squared-swallow’ tail, makes the 90 feel the smallest and most compact underfoot in this group. Nevertheless, it carries weight well and requires little encouragement or rider input to rise up onto the plane. It accelerates progressively rather than jumping loose and this forgiving easy nature is the overriding sensation throughout the board’s performance, even in the most challenging conditions. With the straps set in their middle positions, the Wave Cult just loves to be pushed from rail to rail, responding with such fluidity and not a hint of stalling. Style and balance is irrelevant – it responds in equal measure to front or backfoot bias and gives the rider confidence to make that tight section, or eek the very last drop of power out of a ride. When wave riding is this much fun and above all – easy, why is there a need for a new generation of ‘vanguard style’ board? Well, it is a good question. Make no mistake – the Wave Cult is a wave-riding machine and doesn’t really fly on its fins for a spot of crossover blasting as some other contenders in this month’s issue can. But if it’s a captivating board for use in any wave environment you’re looking for, the Wave Cult is a top choice and was fought over by the team!

THE VERDICT
With stunning levels of ease, smooth response and fluid rail-to-rail agility, the Wave Cult is a wave board that will find favour with all who ride it. Take it to any wave environment, it will adapt to any style and flatter those that dare to push harder. A favourite amongst the team, it is well recommended.