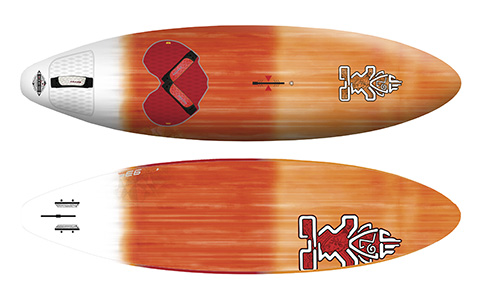 THE LOW-DOWN
The largest in the Kode Wave line-up, the 93 can be set up as a single-fin, but comes supplied as a twinser with a couple of stiff MB G10 fins, and was tested as such. For 2016 the bottom shape of the Kode Wave has been refined to bring the vee further back, making the mono-concave start just in front of the fins. The rails in front of the track have also been softened this year, said to aid the carving and recovery when the tail and fins have been released.

BRAND CLAIM
“The Kode Wave is designed for fast, new school wave-riding, for big jumps and for Euro onshore conditions. Philip Koster and Dany Bruch use this board for the tour in places like Tenerife and Pozo. It’s the board we use most often and it’s our most popular wave board. The Kode Wave just wants to boost; whether it’s jumping or wave riding, it has an excellent projection above the lip with a lot of power.” Scott McKercher

PERFORMANCE
One of the largest and widest in the group, the Kode Wave can carry weight easily and feels quite conventional underfoot. With the fins placed in their recommended positions in the boxes, you’d be forgiven for thinking it is actually a single fin board, such is the drive and traction provided. It doesn’t slide or skip sideways at all, but releases smoothly and gathers speed well. There is certainly no issue with tracking upwind either, using the rails in the tail of the board as well as the fins to drive and point, the board cutting through harsh chop effortlessly. Its easy forgiving ride is such that it masks the speed you’re actually going … until you hit the next ramp! With directional stability, speed and comfort, it can be used to great effect around a break and would undoubtedly make an excellent crossover board as well, capable of making the most of less than ideal conditions. On the wave face we did find the 93 quite stiff compared to others in the group initially, being less willing to drive tight through the turn or vary its arc. Move the fins further forward and the mast track an inch to the rear however, and the board’s response and feel was noticeably changed. The turn can be set on the front foot and tightened through the back foot, before the familiar loose skatey response of the twinzer takes effect on the top turn. It was certainly a preferred set up amongst the team, and showed little loss on directional stability or drive as a result.

THE VERDICT
An easy user-friendly board, with the manners and temperament to take on the most challenging conditions, and the speed to make any aerial more expressive. Take time to set up the board according to your riding preference.