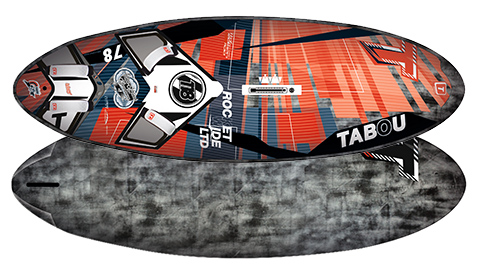 THE LOW-DOWN
The 138 is the largest sibling in the Rocket Wide series, and remains unchanged in design for the 2016 season. Available in either Tabou’s standard CED construction, or their LTD technology as tested here, it is supplied with Tabou’s logo’d Cobra straps and a relatively swept back 48cm moulded fin. Wide and thin compared to their benchmark freeride Rocket range, the ‘Wides’ are designed to carry more stability and glide, with particular strength in their gybing credentials. Looking at the 138’s design, it has an extremely flat deck throughout its short rounded outline, whilst on the underside it carries Vollenweider’s signature pronounced double concave in the shoulders before progressing to mono-concave between the straps and broad cut-outs in the tail.

BRAND CLAIM
“The Rocket Wide is like the Rocket but wider and a little thinner, which gives 3 main benefits: early planing, quicker acceleration, and the ability to fly through lulls. What does that mean for a freerider? For one, this board keeps its speed and stays balanced during gybes, which means that you make more gybes and come out of them faster.”

PERFORMANCE
On the water the 138 does not let the Rocket Wide’s fast emerging reputation down, providing a high level of performance that would keep even the most demanding advanced rider entertained. Without the inclusion of training strap positions and with even the inset straps quite far out on the rails, the Rocket Wide isn’t the most user-friendly for novice riders. But that said, when turned off the wind it planes incredibly early and easily, putting it within reach of the ambitious intermediate rider. As more power is applied, it flies on its fin superbly, more akin to a freerace than freemove hull. In short, sharp chop we did find it ploughed through the water a little in its mid-section, but with time experimenting we found this sensation could be reduced through subtle tuning and having more confidence to push more through the back foot. Fast on every point of sail, the 138 thrives under the influence of an efficient sail, possessing the sparkle and life of a high performance board, matched with the ease you’d expect of a freeride platform. In the gybe the Rocket Wide enters with speed and confidence, its rounded outline and thin rails helping it to grip hard and fit around impressively tight corners for its size. It carries its speed easily through the turn, and we were pleasantly surprised at how willing the 138 was to grip through the turn in heavy seas, taking a lead from the rider and responding well to forceful pressure. Offering plenty of performance over a staggering wind range, the 138 shows that the wide-thin concept works equally well in the larger freeride board design, making it much more than just a platform for the progressing sailor.

THE VERDICT
The 138 provides a master-class in the capabilities of larger modern freeride boards, offering freeride ease with freerace performance.