Maui Ultra Fins are already well-known for their wave and freestyle fins, used by world champions like Philip Koester, the Moreno twins and Sarah-Quita Offringa, and also for their high-end carbon fins, made in Germany. Their new Delta fin however solves an old problem with a modern solution. Designer Rick Hanke is an aeronautic engineer by trade but also sees his challenge in finding solutions to all fin-related issues and went on a quest this time to find a solution to shallow water spots that are often also very weedy. We caught up with him to find out more about their innovative fin design – the Delta series. 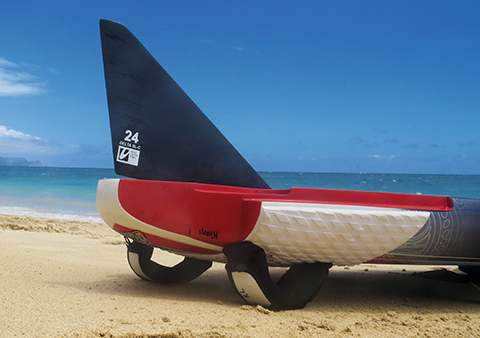 WS: Tell us about the Delta series design process
RH: I was inspired by my knowledge of Delta wings of aircraft (Eurofighter, Mig 21, Concorde etc); that started the CAD process. At first we made computer calculations in order to optimize the foil combined with detailed CFD (Computational Fluid Dynamic) to verify the flow and the vortex. About 25 prototypes were made, focusing on different thicknesses and tested by team riders like former German speed champion Birger Bruhns and PWA slalom sailor Kurosh Kiani. The testing proved the computational design, no modifications were necessary. We had top-speeds already in the first testing stages of just under 80 km/h. The decision following the testing was 3 different types: Delta (for free riding), Delta-Slalom and Delta-Speed (being the thinnest).

WS: What are the features of the Delta series?
RH: With the Delta wing series we introduced a completely new category of fins. Inspired by Delta wings of aircraft and transferring the special aerodynamic features to windsurfing. The benefits of the delta design are at high angles of attack a leading edge vortex enforces the flow to stay at the surface, no flow separation. Additional lift is also created.

All these features are also beneficial to a fin. The relative thickness of the Delta series ranges from 3.5 to 5.5%, whereas a straight slalom fin has a relative thickness of 9 to 10%. There are many advantages to this – the Delta fin is the first shallow water fin in the world and also the first which can be sailed in the worst weedy conditions you can imagine. Every straight fin stops you from sailing in these strange conditions. For the first time bays or tidal areas with only 1 foot water depth could be sailed without any fear of catapulting, hurting your body or destroying your equipment. Due to the high rake of 55 degrees, touching ground is smooth, nothing happens. Therefore the Delta gives you much more sailing opportunities – why walk when you can sail? We’ve had very positive tests so far by windsurf mags. You have to be light footed when you start planing – like with any other weed fin and very tight gybes don´t work – medium arcs are fine and the fin actually assists you in the gybe. 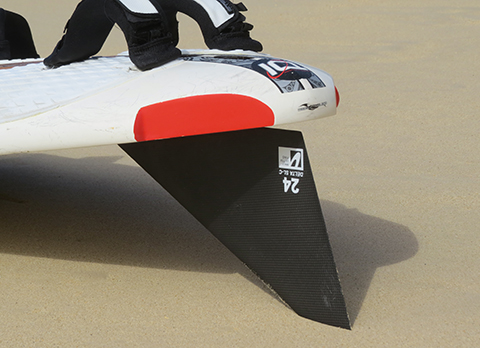 WS: It’s a pretty unusual design, what has been the market reaction?
RH: We sold more than 500 pieces in the first year, 65 % of the freeride version, but also quite a lot of the speed versions. Demand is still up, the main markets are Netherlands, Denmark, Germany and Australia but also Poole in the UK. Many sailors like it that the centre of effort does not move to the back of the board like with a traditional weed fin. Some people did not like it, the feeling of it / applied to much pressure with the back foot when not fully planing. The return rate has been very low – less than 1 in 35 buyers in year 1 – which is excellent for such a groundbreaking product, hardly any returns nowadays. We had a phone call by a husband buying a Delta fin for his wife who broke a leg when windsurfing in shallow waters! A unique spot where many Deltas are used is the shallow water bay at Mandurah, South of Perth (Western Australia). For the first time the 1-foot deep weedy spot could be windsurfed using MUF-Delta fins.

WS: Are you still developing or expanding the design?
RH: We recently developed new versions of the Delta by using Carbon construction in order to make the fin much lighter and to allow bigger fin sizes (22, 24, 27 and 30 cm length) which can be used with bigger boards and sails. The 30 cm version can also be used for Formula boards with sails up to 12.5 m2. Instead of a 70 cm straight fin you can sail with a 30 cm fin length. This was successfully tested by the German Slalom professional windsurfer Vincent Langer who was pretty sceptical when seeing the shape for the first time!

WS: For any other sceptics out there what would you say!
RH: The Delta fins are the ultimate tool for shallow spots, extremely weedy conditions and speed sailing. Compared to a straight freeride or slalom fin, the fin length can be about halved. Combined with the high rake, the danger of injury by touching ground is greatly reduced. Also speed sailors can finally use the flat conditions of tidal waters for even higher speeds. Delta wings are fast, easy to control, have great upwind abilities and gybe very well in wide and medium turns. What’s not to love!

“ Compared to a straight freeride or slalom fin, the fin length can be about halved ’’