The Tiree Wave Classic’s 34th year started calm but ended with a bang! Event photographer Richard Whitson gives us the scoop on a highlight of the UK wave competition scene.

Great winds and windsurfing sessions in the preceding two weeks of the 2019 Tiree Wave Classic meant that expectations for the event were as high as ever for the 75 pre-registered competitors spread over five fleets: Pro Men, Pro Ladies, Amateurs, Masters and “Future Pros” / Youths.  As in the previous 4 years, Wild Diamond, headed by William Maclean, were the event organisers with Visit Scotland, Argyll Estates, Caledonian MacBrayne, The Scottish Salmon Company – Native Hebridean, Tiree Community Development Trust, The Mailing Room, Windswept Breweries and S2Maui being the key event sponsors.

A quiet start to the week with light winds actually worked in favour of the “Future Pros” camp where immediately after registration at the Tiree Lodge Hotel, this year’s event HQ, Sam Ross of the RYA and his team of Torin Prescott, Sami Poole and Calum Nicol were able to get the youths out on Gott Bay for an initial assessment and then split into three training groups. Sam and his team were great motivators and kept the youths enthused over four mornings of sailing under progressively more challenging conditions. The “morning” format was a change to previous years and was well received since it allowed the youths to spectate at the main fleet events or go free-sailing afterwards. Three youths in particular shone through: Ross Mauritzen in 1st, Rory Dunlop 2nd and Euan Lindsay 3rd, with Ross being offered a sponsorship deal with S2Maui Sails; Ross is definitely a name to watch out for in the future.

Catriona Spink, local “Community Leader” for Surfers Against Sewage and Parley for the Oceans “Cold Water Island Project”, made the best use of a quiet Monday to muster the support of the combined fleets for a clean up of Hough beach. More than 40 of the fleet helped out to amass 6 tons of fishing and plastic debris, a superb effort. 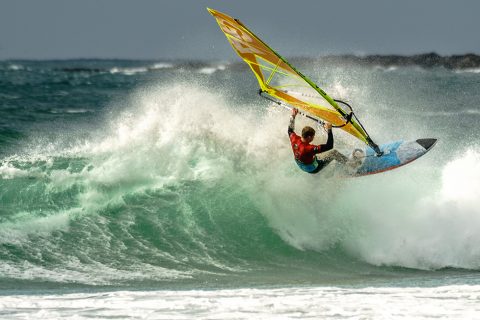 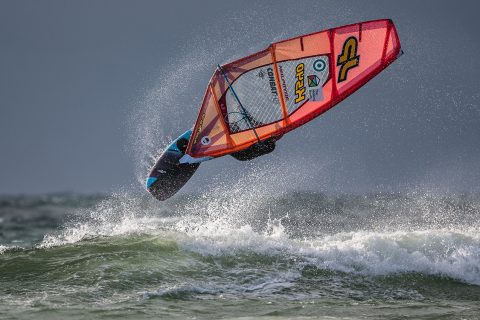 On Tuesday, forecasts were variable with the only solid wind with swell day set for Thursday but event organiser Willy Maclean made the prudent choice to make the most of Tuesday’s wind and press ahead with a single elimination round at Crossapol beach for the Ams, Masters and Pro Ladies. Being at latitude 57˚ North, Tiree sees less than 11 hours of daylight at this time of year, so to have a double elimination in four fleets means two competition days are required. So it was better to have a single elimination in the bag rather than wait on conditions that might never transpire …. a very wise decision as it turned out!

The Ams, Masters and Pro Ladies fleets all managed to complete their single elimination under challenging conditions with only a 1.5m swell and almost bolt onshore winds, with only a small port tack cross-shore component – meaning some reasonable ramps for jumping, but poor wave riding.  Tom Taylor, Jim Brooks-Dowsett, and Sara Kellet came out on top in their respective fleets in the tricky conditions. Sara was pulling off some tidy forwards and with Sarah Hilder, last year’s TWC Ladies champion, not competing due to injury, the stage seemed set for Sara adding Tiree to her 2018 UK Ladies Wave title. The Pro Men opted for an “Expression Session” rather than a single elimination round, with all pulling off impressive jumps, loops and crashes in equal measure. Ben Proffitt took 1st with a high and controlled fully tweaked push loop. 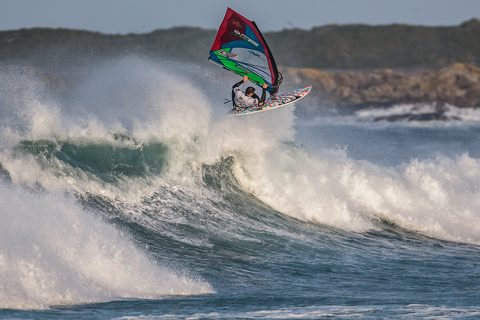 BIG THURSDAY
After a light wind rest day, the Thursday forecast held for 20+ knot port tack, cross-shore winds and a 3m swell, meaning it was an all-day battle at the Maze. Due to the daylight shortage a trailer was loaded the evening before with around 60 of the Pro Men’s pre-rigged sail choices and transported round to the Maze at night so they could start soon after first light.

The 16 strong Pro-Men’s fleet neatly fell into a four man 10 minute heat format with 2 minute transitions. By mid morning the single elimination had been completed with Phil Horrocks in 1st, Finn Mellon .s. I had to give up shooting since I could hardly see ..… so we all had to wait until the evening prize giving to find out who had won the Ams crown and the Pro Ladies title. In the end it was Miguel Ogando who won the day in the Ams with Tom Taylor 2nd, Nick Welsh 3rd and Pavel Hort in 4th. This was Miguel’s and Tom’s first Tiree event, so both were delighted with their podium positions. Despite sailing well and catching some impressive off-the-lip air, young Ruaraidh Somerville, in only his second year in the Ams fleet after progressing up through the Future Pros, couldn’t match the skill, strength and experience of local waterman Gavin Dunlop who finished 5th.

Keeping the packed audience in suspense, Wild Diamond kept the Pro Ladies result to the last.  Although Sara’s main counting wave was high scoring and radical, she could not find a second high quality wave before the heat ended and so Liath’s combined score won out and she seized the Ladies TWC 2019 crown. With a keen eye for picking the waves, she is definitely another name to watch out for in the future. As Liath sportingly said “… if the conditions had favoured jumps, she might not have been on the podium”, so that was some consolation to Sara. Debbie Kennedy finished 3rd and Jenna Pettit 4th.

Last, but by no means least, a special mention needs to go to Tris Levie who, as well as sailing well in the Pro fleet, ably provided safety cover and showed true ‘aquaman’ skills with an uncanny ability to swim out to and wiggle his way, seal like, onto surf pounded rocks to keep a watchful eye on those who looked in peril in the shorebreak …. hats off to you Tris!

So, there we have it for another year …. smooth organisation and hosting by the Wild Diamond team, a fabulous photogenic setting, bubbling talent in the Future Pros, world-class athletes in both the Pro Men and Pro Ladies fleets, double eliminations in all four main fleets, dawn to dusk competition, sun & squalls & rainbows, and ‘super final’ battles providing drama and upset ….. all in all, another classic Tiree Wave Classic! 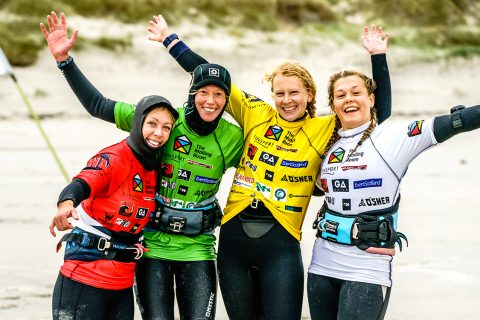