When one of the most spectacular yachts in the world parks up at your local windsurfing spot, then it really would be rude not to go check it out, especially when it’s blowing 30 knots! Scotty Stallman, Kevin Greenslade and Si Pettifer blasted out into Weymouth harbour to check out the incredible “Black Pearl”, while Andy Stallman captured the action from a R.I.B. Read on for more about the yacht and what the Weymouth slalom posse made of it! 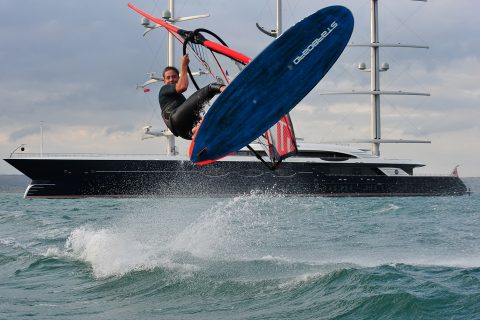 THE BLACK PEARL
Owned by Russian millionaire Oleg Burlakov, at 106 metres in length, the “Black Pearl”, is one of the largest superyachts in the world and reportedly cost $200 million to build. Burlakov has a number of business interests including banking and oil and gas and is worth up to $1 billion on paper, so he had no problems funding the building of the impressive Black Pearl, which was named to pay homage to the movie, The Pirates of the Caribbean.

The Black Pearl was built in Oceanco shipyard in Rotterdam and launched in 2016. It has three self-rotating carbon masts, all seventy metres high (around the height of a 15-storey building), each boasting six sails totalling 2877 m. The sails can be opened or furled at the touch of a button in seven minutes and when fully deployed there are no gaps between the sails, creating a single hugely efficient panel to capture the wind. The sails are trimmed by rotating the masts. As there is no rigging, the masts and yards can be rotated without restriction for all points of sail, making Black Pearl a capable upwind clipper. 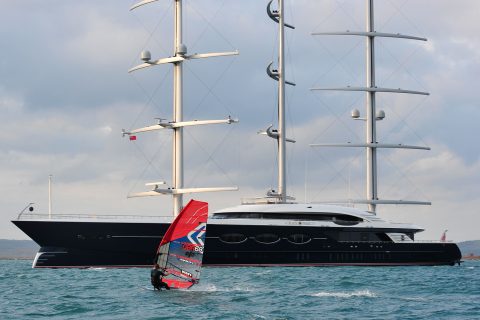 Click to Enlarge – Windsurfing with the amazing Black Pearl

The boat has six cabins that can accommodate 12 lucky guests. There is also space for the 18 crew members that are needed to sail the boat in a further nine cabins. Not much is known about the decadence of the boats interior due to security reasons. Although the yacht has diesel engines, it has innovative ‘green’ technology. It is designed to generate electricity to power its onboard systems by using its propeller as a turbine while the yacht is propelled by the wind, as well as solar panels built into her sails. Under sea trials Black Pearl achieved 20 knots of speed on the water, and its developers expect that it will be able to transit the Atlantic using no fuel. Other features include an on-deck jacuzzi, convertible cinema, full beam beach club and a tender garage.

Apparently the boat was docked in the safe deep water anchorage of Portland Harbour to resupply and that was when the crack team of slalom sailors along with ace lensman Andy Stallman took their chance to strike! The Weymouth slalom posse of Scotty Stallman, Si Pettifer and Kevin Greenslade recount their mission! 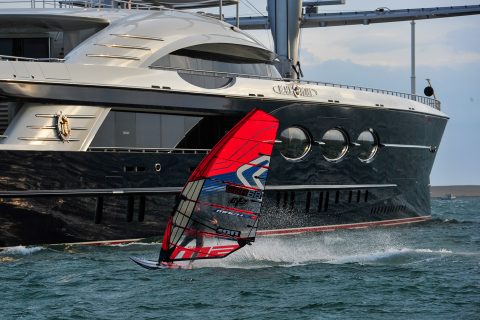 Click to Enlarge – Up close with the Black Pearl

SCOTTY STALLMAN
“When the Black Pearl visits town you just have to go for a look really don’t you? The Black Pearl is a real superyacht, at 106 metres long and costing $200 Million; we don’t see many of those in Portland Harbour!

With a great forecast on the cards a training session was planned with Kev and Si. As we were heading out, harbour legends Pete Young and Steve Corps decided they also wanted to see the Pearl up close. Steve’s boat was made ready and Dad joined the boat with his camera to get a few shots. 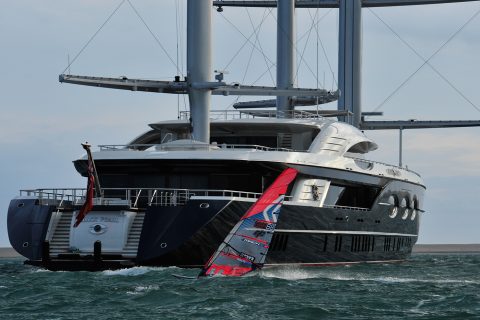 I can’t really explain or put into words just how awesomely beautiful the Black Pearl is! As you approach it you realise how huge this boat is; it is not only massive but perfect. We sailed around her for a couple of hours and I am sure their crew were keeping a good eye on us! That evening was just amazing, to be sailing and jumping around the Black Pearl with your mates in 30 knots of wind; does it get any better? I’ve had some awesome times windsurfing around the harbour, but this was definitely one of the highlights. I will keep an eye out for the next superyacht in town, if the owners of the ‘Maltese Falcon’ are reading, we are ready for you!” 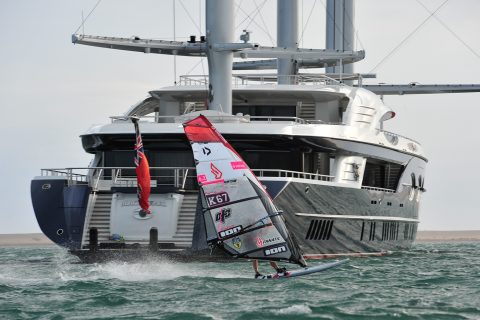 Click to Enlarge – Simon Pettifer flying past the Black Pearl

SI PETTIFER
“This was just an awesome evening session with the boys. I’d been told about the Black Pearl being in the harbour and that she was a massive yacht, but when I arrived at the harbour that evening, I couldn’t believe my eyes! The masts were so tall, we just had to sail out to her for a closer inspection. It was the perfect evening. I was lit with my 6.2m on my 98 litre board and loving it, being out with two of my best windsurfing buddies. As we ventured out to the middle of the harbour the Pearl just kept getting bigger and bigger, by the time we were next to her it was mind-blowing. This boat really is a beauty and boy she was so shiny. Sailing under the bow of the boat was unreal, I couldn’t believe that I could fit under it, with plenty of room to spare as well. With the added bonus of a boat with photographer along for the ride, we had an absolute blast, smiles all round!”

“ I can’t really explain or put into words just how awesomely beautiful the Black Pearl is!.” 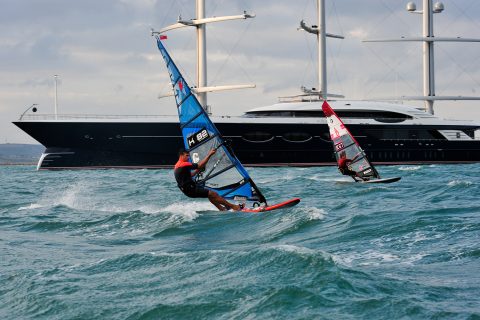 KEVIN GREENSLADE
“I first set eyes on the Black Pearl after a session at Portland Beach CrossFit. My first thought was, ‘Wow, wouldn’t it be great to have the chance to sail alongside this amazing superyacht’ (we don’t get many like that in Weymouth). When you read up about the yacht you realise it’s not just beautiful, but also an incredible piece of engineering, making this vessel all the more intriguing. So the following evening driving home with over 30 knots of wind, knowing I was meeting up with Si and Scott, I already had thought how cool it would be to sail out and get a selfie. Even better, at the end of a great session, Pete and Steve decided to take the boat out to take a closer look, and better still take our resident photographer Andy Stallman out with them.

The three of us were like kids in a sweet shop, we couldn’t get out there quick enough, whooping and hollering all the way. As you get close you realize the sheer size of the Pearl, she is incredible. Whilst sailing around we spotted some guys at the stern; in fact, they had been kiting at the stern, I mean imagine launching off this beast! Anyway, I thought, never a better opportunity to get on board and sailed right up to the platform! Obviously at this point, it is important to stay cool. “Hey guys nice boat,” I hollered. “Thanks, you guys are fast,” came the reply. “Thanks,” I say. “Any chance of a look around?” After that comment, they stopped laughing and I realised it was unlikely and sailed back thinking, well you gotta try! We are always lucky to have Andy at hand documenting our sessions, but this one was something special to capture on camera.”

“It’s not just beautiful, but also an incredible piece of engineering.” Click to Enlarge – Blasting in Weymouth with the Black Pearl