I’m writing this the week after British boxer, Anthony Joshua, has become the biggest name and hope in a sport that has, for all its technicalities and trappings (not to mention money and blustering), a very simple and inherent goal – to survive. Racing is windsurfing’s most simple form of competition to understand – ‘first past the post’ is a basic principle that can be followed by spectators even if they have no understanding of the technique and training that is required to reach that end goal. In this test we take a look, not at the meanest engines on the market to achieve that objective, but their neighbouring cousins – the 3-cammed power-plants that for most will more than suffice. Or will they…? That is what we are encouraged to think by all the marketing and accompanying literature; but like slalom boards, have the high-end engines become so refined by recent design concepts that they are now perfectly accessible to the wider audience? We sent our test team in to find out.

This test was originally published in the June 2017 issue.

FINDINGS
When the wind’s strength is making the hairs on the back of your neck stand to attention, and the chips are down, the one aspect of your sail’s performance that you really hope to rely on is its stability. In the past this has largely been achieved by increasing luff curve, but it came at the cost of bottom end grunt and feel. Sails felt rigid and lifeless in the hands – an immovable object, like holding a solid wing up to the elements. A few years ago some lofts started experimenting with reducing luff curve, to release tension in the rig’s panels and let the mast do what it knows best – flex. To counter any degradation in stability, new concepts were introduced – new resistive materials in the sail’s chord, and seam shaping were a couple of solutions adopted. The truth is that it was always going to be a compromise, particularly in this class; a balancing act between performance and comfort.

The goals of a brand’s racing program are easy to define – to produce a sail that will beat the competition. Nothing else matters except claiming that top position. The sail could be as ungainly as you wished, as long as it won! And the truth is that a winning combination is not solely down to the interaction between the mast and sail, but rather the sum of all the component parts. It is down to where the deck-plate is placed on the board and the influence the sail’s power has on the trim of the board. It is down to the geometry between the sail, board and rider – the balance in relation to their own individual riding style. And then there’s the performance generated by the fin. The point we are trying to make is that, as with the pinnacle of any sport, there is a lot that goes on behind the scenes. Slalom competitors (be it on a national or international level) spend hours and hours on the water, fine-tuning and tweaking to get the balance exactly right for themselves.

In the past, this was the easiest way to separate the job descriptions between the multi-cammed freerace sail and their race-elite friends; the cammed freerace sail possessed a degree of built in tolerance. They didn’t need a ridiculous amount of time investment to enjoy their capabilities – simply rig them and go sailing. For 2017, what we have seen is that many brands are narrowing the gap between the two sail classes. These freerace sails are becoming more and more high-performance, but as a result need a little more tinkering and fine tuning (for conditions and setup) to really realise their potential. There are also some sail lofts experimenting, not only with the depth of the profile but also the shape. Past train of thought was that a deep profile locked forward in the draft was the way to go. It guaranteed stability, but as a result pinned the board down and limited that flighty top end feel of dancing on the fin. So several brands are now moving the deepest point of the profile back; in other words they’re ‘refining the entry’. It means the sail cuts through the air more efficiently and the power is centred around the rider, making it easier to get the lift and fly on the fin. Of course, that feel is not for everyone, but it is certainly a riding style that is being nurtured by the racing programs and slowly filtering down to this cammed freerace class.

The one last consideration that has to be noted is cost. If you are thinking of splashing out on a brand’s full racing sail, the only real option is to match it with one of their lightest and most performance-oriented masts. And that is when costs begin to seriously ramp up. Many of the sails here are actually recommended for use on the respective brand’s mid-range mast option. They may even adhere to a ‘minimum mast’ concept, where most sail sizes within the range fit on just two mast sizes. It’s certainly worth a thought… 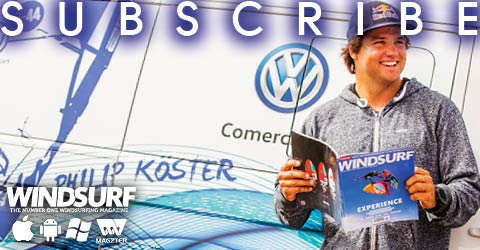 SUMMARY
There are several new sail designs and concepts in this group that draw the eye and are well worthy of note. Starting with the V8 from Neil Pryde, it is the only pure twin-cam in this test and draws upon the brand’s wealth of knowledge through their reputed race program. A real all-rounder with light precise handling and rigging ease, it provides hassle free blasting performance and yet wouldn’t be embarrassed on a national racing scene. Both the GA Sails Phantom and North Sails S_Type have changed markedly for 2017, and require time tweaking and fine-tuning to really appreciate their range of set. Creeping ever closer to their respective PWA slalom siblings, they reward the time investment with nigh-on cutting edge performance. The Loftsails Switchblade certainly feels softer and more user-friendly than we recall of its predecessor, and retains a considerable tuning range in its own right too, altering its very nature and feel. The Severne OverDrive stands out from the field as the contender that is pushing the boundaries on the understanding and influence of luff curve. It has many unique properties and became a magnet for the light to medium weight sailor that wanted to mix it with the ‘big boys’. And then there was the Point-7 AC-K – the surprise package in the group. It may not set according to conventional thinking, but the performance available cannot be doubted. Just when you think that the steady process of iterative design may be coming to a conclusion, along comes another concept that changes the landscape again. Exciting stuff.