“The new high aspect 1000 is an all-round performer for the ambitious foil windsurfer. Following the line of the 900, the thinner profile offers great speeds, lively turning behaviour, yet early lift for a range that goes from light winds all the way to fully powered up flight.” 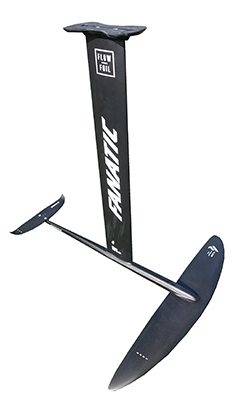 Fanatic’s Flow wind foiling platform was redefined back in 2019, with the introduction of the 900 and 1250 front wing options. Last season saw the further release of the 1500 and 1000, with the 1500 tested by us last year (August ’20 issue), and to much acclaim. So it’s now the turn of the 1000 front wing option – the highest aspect front wing available in the Flow lineup, which remains unaltered for the 2021 season. Targeted specifically at wind foiling (the brand’s ‘Aero’ Foil platform geared towards surf, SUP and wingfoiling), the head of the mast nevertheless comes as a plate system as standard, requiring the purchase of a Tuttle head adaptor (£55.00) if you want to use the foil in a Deep Tuttle box. So perhaps there’s a chance for a crossover into winging as well? More on that later. Irrespective of whether you opt for the Flow or Aero series, the buying process is the same on both: firstly, choose the mast/fuselage package of your preference, before choosing the front wing size to suit, each one supplied with a 215 cm² tail wing. The mast-fuselage package comes complete with a well-made rectangular bag for keeping all items together when dismantled, the wings supplied with their own sleeves that can be used to protect the carbon components when the foil’s assembled. Last year we were impressed with the Flow foil’s rigidity and stability, as well as the 1500’s early lift and predictability in flight. We used the 1500 extensively in 2020 whilst tutoring many through their first flights at the centre, so it’s the turn of its racier counterpart, the 1000, using the same 900-900 mast-fuselage structural setup.

Stepping onto the Fanatic again after a while away from it, the first sensation to grab you is just how stiff and solid a foil it is. It is just so dependable and regimented in flight that you can have the confidence to load the foil, banking it over to windward to achieve some righting moment. We have heard through the rumour mill that Fanatic are working on a carbon mast to include in their lineup, yet it’s small wonder that its release has been some time coming as a carbon mast will really have to perform to outdo this aluminium option and justify its inevitable cost increase.

Using the 1000 in light marginal winds does take some active involvement from the rider to get the most from it. It requires power from the rig to get going and stalls easily in lulls or transitions if speed is lost and the angle of attack becomes too critical. Instead of being a one-wing solution, the 1000 is better perceived as the partner to the 1500, for use when the breeze (and search for more performance) is on. Properly powered, the 1000 is fast, nimble and alert, partnering foil-specific boards well and really finding its calling as it accelerates willingly across and off the wind. It requires more involvement and much more precision than the 1500 … but that’s the beauty of it – a simple addition if you have the larger wing already and are looking for that next challenge. It doesn’t take too kindly to going slow and needs to maintain good speed through the gybe to have any chance of coming out in full flight. Yet as the high aspect option for the Flow range, the 1000 will provide the performance and minerals to extend both wind range and enjoyment. Can it be used for wing-foiling? We didn’t get a chance to use the 1000 … but the 1500 is certainly capable. So, if you’re looking to predominantly wind-foil yet dabble occasionally in wing-foiling, Fanatic’s Flow series has the versatility to oblige.

OTHER FOILS IN THIS TEST