From our May 2021 issue our test team review the Starboard Foils Aluminium Freeride Plus 2021: 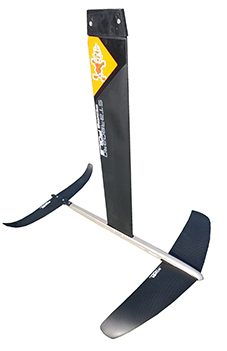 The new season ushers in a second generation Freeride Foil to Starboard’s wind foil range, sitting neatly between the Super Cruiser and the GTR Plus. Longer in mast and fuselage length than its predecessor, the ‘Plus’ in its name depicts the fact that this Freeride sports the brand’s new fuselage system, providing a healthy handful of different shims to help tinker with the foil’s pitch. It’s exactly the same fuselage used throughout the Starboard wind foil range, including both their performance Race Plus and iQ Foil sets – the official foil for the 2024 Olympic Games. And herein lies the beauty of Starboard’s modular system: the Freeride is targeted squarely at those progressing into foiling, and as the user’s skillset and ambition grows, the brand’s platform allows for incremental diversification through the addition of various component parts, starting with extra wings. It all hinges, however, on the necessity for the Freeride itself to be accessible … a good starting point in effect. So how did we get on with it?

First thing to state is that fitting the Freeride’s Deep Tuttle mast head into the board can initially prove a little time consuming, so be prepared. The head piece is plastic and is kinder to the board’s box than the tapered aluminium head found on other foils, yet needs to be worked or see-sawed into place for most boards. It’s a reassuringly tight fit, the bolt holes relatively narrow in the mast top, so spend time ensuring a secure fit without threading the screws.

On the water the Starboard is the missing piece to the Starboard wind foil lineup. Whilst the Super Cruiser is super easy, well-mannered and somewhat passive in response, and the GT-R Plus offers freerace performance that needs to be worked for in marginal winds, the Freeride Plus sits squarely between the two. Deliver power from the sail to get water flowing over the foil’s wings and it’s quick to respond. It provides plenty of lift and feedback that can be utilised effectively in marginal wind pumping and settles into a balanced stable stance, maintaining its ride height easily at slow speeds. As speed increases progressively, the Freeride Plus remains well-mannered and planted, the super span of the tail wing no doubt helping. It also plays a major role in the foil’s stability and ease through the gybe, maintaining its ride height instinctively and forgiving even the most clumsy foot change. It really is the perfect tutor for full foiling gybes! As the wind continues to increase, the Freeride does begin to present some behavioural effects, as if the board and sail want to drive harder, but the foil (i.e. the large tail wing, we suspect) is holding you back. As a result it manifests in a front foot heavy ride and the ride height invariably increasing, unnerving the pilot as the corrugation of the water’s surface is felt through the foil. There is however the perfect remedy provided. We were initially using the Freeride Plus with a neutral (zero) shim but changing it to one of the negative shims completely settles the foil’s ride height and nature. The stronger the wind, the more negative the shim required. We went right through to the -2 shim and the difference in feel and character is significant, demonstrating just how versatile the foil’s setup can be. Fast and capable, its flight height returns to being incredibly stable, instilling confidence in the rider and helping them to glide through those utopian full-flight transitions. It’s the ideal feeder into the foil racing pathway and as the rider becomes more proficient, loading the foil to explore its true potential, a smaller tail wing would be the first natural addition to the shopping cart.