A true all-round freeride engine with impeccable manners and handling, its power delivery striking just the right balance between ease and crispness across a stunning natural wind range. 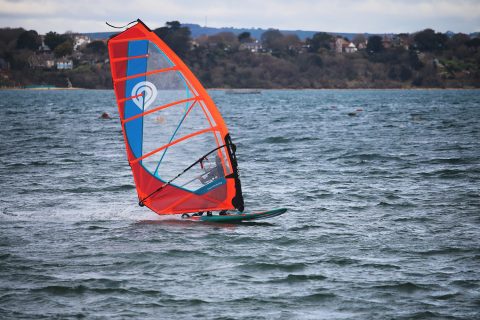 The Nexus Pro is Goya’s five-batten freeride sail option, stemming six sizes from 4.9m to 7.4m. As it progresses up through the sizes it morphs from a manoeuvre-focussed bump and jump sail to a more locked in engine in the larger sizes with a lower cut foot intended to generate low-end power and speed. In this no-cam category, the obvious choice in the Goya sail range for inclusion would have been the Mark Pro. However, Goya have adopted a two-year life cycle for their board and sail designs, meaning the Mark Pro 7.2m, tested by us in the May ’20 issue, remains unchanged for 2021. Hence, we thought it a good opportunity to test the Nexus in this size. Goya also make a valuable point that the labelling of a product as ‘freeride’ shouldn’t mean a dumbing down or deviation in build or quality. In sail designer Jason Diffin’s own words, the Nexus Pro is really “quite robust … light in handling, but durable as well”. It incorporates the brand’s usual premium features, including a full scrim perimeter, Carbon Stretch Control tendons, a titanium clew eyelet, the brand’s fabled Rip Stop luff sleeve and double stitch seams throughout the main stress areas. Rigged here on a Goya Eightyfive Pro RDM, it is straightforward to rig, the rigging dot at the end of the top mini-batten providing the guide. Pull on the prescribed tension and there’s plenty of luff curve in the Nexus, the leech opening up progressively to batten four, the only batten to retain any positive rotation around the mast. And as with all recent Goya sails we’ve tried, its set is stunning, without a crease or blemish in any of its panels. Tested here in a blood-red orange and blue livery, there is also a bright, new colour scheme made available – an amber yellow and red, which Goya says is, “Guaranteed to make you stand out!

“The Nexus Pro, an all-around masterpiece, is RDM/SDM compatible on all sizes and puts its number one priority on pure and simple fun. It is the best sail choice for power, speed and manoeuvres in conditions ranging from flat water to bump and jump, and a touch of surf.”

Used in marginal winds, the Nexus feels light and balanced in the hands at rest, yet quickly generates crisp and positive feedback as a gust hits. It provides plenty of useable bottom end power, its forced profile initially supplying the pull and impetus, which in turn can be amplified through pumping, the movement in the luff sleeve helping to accentuate the drive supplied during each pumping cycle. Focussed and manageable in the hands, it soon settles into a relaxed posture, the increased rake in the boom’s angle bestowing the rider with a real sense of ease and control. The sensation the Nexus provides the rider is that they can take on anything – any variation in wind strength and any change in sea state or role. And in essence, that is what the Nexus offers too – the power and handling to do just that! It has a stunning natural range on just one setting and despite being the only five battened sail in this test, was in no way embarrassed by its peers when pitched against them in a drag race. In overpowered conditions, the centre of effort was locked perfectly in place, keeping the board honest and trimmed, and whilst travelling over heavy seas its handling remains impeccable, requiring little intervention from the rider. And in transition the five-batten structure becomes a real plus, enabling the Nexus to be manoeuvred and repositioned effortlessly, in time for a run back in the other direction.

OTHER SAILS IN THIS TEST