German PWA star Leon Jamaer is as happy in a heat as he is on the road. A Red Bull Storm Chase finalist, he has the skills to backup his lust for adventure. Recent travels took him to the far northwest of the UK to the islands of Lewis and Harris in the Outer Hebrides, Scotland; Leon recounts his trip and gives an insight into the origins of his passion for exploring.

I remember the afternoon my parents and I picked up my first proper bike from the store. The next morning I got up before sunrise and rode the bike through the forest and around the lake. My parents were worried as they had no idea where I had gone and were upset when I returned home late after breakfast. That moment however expanded my range of freedom and independence. I could go wherever I wanted to, even though that wasn´t much more than a couple of villages. The bike became my daily vehicle to commute to school or to see friends. In a few minutes though I could reach the next train station, take the bike onto the train and quickly arrive at other cities or even the island of Sylt and see the North Sea. During these years of growing up in a small village close to Kiel in northern Germany, the prospect of unconstrained and self-reliant mobility was very important to me. 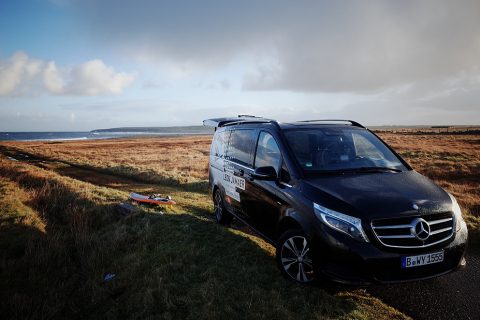 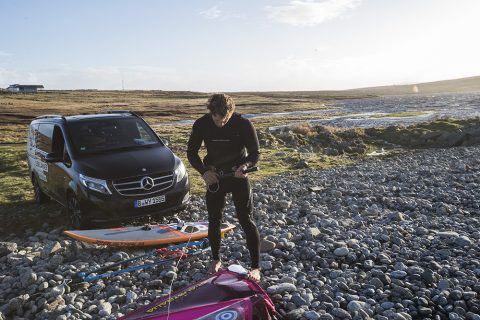 ROOTS
When my brothers, Dani and Henrik, and I picked up windsurfing, I was about eleven years old. My bicycle became fairly useless as it wouldn´t allow me to transport my equipment to the beach. Once in a while I dragged my boards and sails onto the train and made the effort to sail in Sylt. Nonetheless, my brother’s van quickly became the vehicle of desire. I was only fourteen years old when Dani waited outside the school building most Fridays, engine running. The trio of us would drive the four hours straight to Klitmoller in the north of Denmark, windsurf as if there was no tomorrow and return home Sunday night. Sore from sailing, barely able to open our eyes and with wetsuit rash around our neck, the teachers gave us dubious looks on Monday mornings.

But my brothers and I wanted to see other places too and were hungry to discover foreign territory. School holidays gave opportunities to explore shores further away. Motivated by wind and swell forecasts and navigating with ‘The Stormrider Surf Guide Europe’, we drove through France, Ireland, Scotland, England and Norway. Sometimes we got skunked and found ourselves on windless rainy beaches. More often though, we managed to find decent setups and the joy of down-the-line wavesailing.

INSPIRATION
The German ‘SURF’ windsurf magazine fuelled the fire to go out there and discover the world. I absorbed every article, reading about harness tests and Olympic races. However, it was neither the equipment tests nor the competition reports that made my mind spin. Stories of huge waves in Hawaii and images of Kauli Seadi riding flawless lines in Cape Verde or Indonesia were my inspiration. The DVD ‘Plug ´n´ Play’ showed Peter Volwater, Scott McKercher and Thomas Traversa on surreal looking masses of water in the Cocos Islands and Robert Teriitehau windsurfing and freediving in Tahiti´s crystal clear water. In ‘Greenie’ the Irish Mullen brothers portrayed wavesailing in their home country – what an astonishing potential!

In July 2009 I finished high school, worked the summer months as a sailing and windsurfing instructor and then boarded a one-way flight to Australia in search of new paths, new breaks and new people, I learned to live on my own and explored most of Australia’s wave blessed coastline. I got a taste of the lifestyle that I didn´t even dare to dream of when I was a kid. I was finally autonomous and independent; I could drive my van wherever I wanted to; arrive at the best spots of a region or find my own ones. Nowadays, thanks to my sponsors who support me as professional athlete, I have the chance to do trips to the most breathtaking places besides competing on the Professional Windsurfers Association tour. On this one, I followed the road to the north.

“ Unconstrained and self-reliant mobility was very important to me.”

ADVENTURE
The ferry leaves Ullapool harbour and the Scottish mainland disappears in the distance as I get close to my final destination: the Outer Hebrides. The sound of the sluggishly gargling engines and the otherwise quiet sea triggers some of these old memories from travelling with my brothers to flash back. I am excited to get to know Scotland´s biggest island. It was my eldest brother Dani who went on a trip to the Outer Hebrides some years ago and told me about a spot that more resembled a swimming pool than the rough Atlantic Ocean. Except that once in a while a perfectly peeling wave would find its way into this deep bay with clear water. Other than that, I didn’t know much of what to expect. My research had been less intensive than usual. I was mostly headed towards the unknown and liked it that way. William Finnegan describes in his thrilling memoir ‘Barbarian Days’ how the surf lifestyle led him to travel through and live on most continents in the 70s, 80s and 90s. The Internet has taken away much of the uncertainty that Finnegan must have had when he discovered waves on most corners of the planet. However, to me it feels like the adventure is about to start when I arrive at the harbour in Stornoway on the island of Lewis and Harris. The plan is to follow no plans, camp in my Mercedes van and stay wherever feels right. I want to enjoy the freedom of being liberated and not having to follow anyone’s timetables. Plenty of low-pressure systems are forecast to head towards Scotland so I am not worried I won´t get on the water. From Stornoway I cross the island quickly and arrive on the much rougher vegetated west facing coast. The wind is too light but there is some surf. I drive along the coast and look at different spot setups to understand where requires what tide and swell size. The nature is stunning and the people speak with a warm and enchanting Scottish lilt. Behind every bend in the road lies new attractions. The smell of peat burning reminds me that I am far away from home.

ACTION
The next morning it’s stormy from a southerly direction. I rig my smallest equipment and I give it a go at Eoropie beach, right at the top of Lewis. The waves are well over logo high, powerful yet relatively chaotic. I enjoy a pretty rough and lonely session with herds of cows and sheep keeping an eye on me from the cliffs, rainbows all around. Later, I drive further south to sail in Barvas. Again, I am the only person on the water. The water is clear and dark at the same time. I had heard Orcas were spotted around the islands just some days ago. The feeling of having these huge creatures around me is frightening, but I know their appearance is very unlikely. Once in a while a hungry seal, which must easily match my size, splashes up and then disappears again. On the outside seagulls dive deep down into the sea as they feed off a school of fish.

In the next ten days I explore the rest of Lewis and Harris. The landscape that I pass becomes even more isolated, yet astonishing and imposing. In a village on the eastern side of Harris I meet a man who shows me the banks and reefs in the fjord behind his backyard and explains where I must look for fish. Even on this cloudy and rainy day the world that lies underwater appears in clear visibility. With my spear gun I catch two small fish that make a good dinner. Island life is good.

LOCALS
The local people are very welcoming and interesting; I meet a couple who show me their Salmon smoke house and see a tweed factory that produces the famous Harris tweed, still with the same old machines from the 19th century. The owner explains how the colours of the fabric resemble the nature on Harris. The colour of the scarf that she gives me is called ‘mara domhainn ghorm’, which means deep blue sea.

I have another good session at Barvas. This time I share the spot with paddle surfers instead of the active wildlife from the days before. A local who runs the only petrol station and grocery store in the area, that even sells high quality wetsuits, is suspicious of my presence at first.
He explains local surfers had to deal with windsurfers that didn´t know how to share a lineup recently. I am relieved when he tells me happily halfway through the session how cool windsurfing looks from his water angle. Later, he reveals the location of a wave to me that breaks far off the northwestern coast between two islands – “A massive barrelling lefthander. Too big to paddle surf, probably epic to windsurf!” The trip has almost come to an end and I’m already considering when I will have the chance to come back and explore the wave the local told me about, line up the right forecast and windsurf it.

“ The trip has almost come to an end and I’m already considering when I will have the chance to come back.”

SCORED
Even though there were times when camping was tough and chilly, it was the right decision to skip the comfort of four walls and a roof. This way I didn´t miss a minute being out under the ever changing sky. From bright starlight, to clouds and hail in minutes – the weather changes so quick here. On my last night I barely slept as it felt like the howling southwesterly wind would keel over my Mercedes V-Class van. Gusts hammer onto the side and make me dream of stones flying off the beach and straight into the windscreen. Of course nothing has happened to my van when I wake up the next morning. I am at Bragar, for the last few days I have been coming to the spot that my brother had told me about, the ‘swimming pool’, but the waves never found their way into the sheltered bay, until now. In the faint morning light I can see waves breaking and closing out far outside. Some waves reform and peel with power along the protected inside reef. On my first session I am on a 4.0 metre sail, on the second I can barely hold on to a 3.7. I am surprised how well the wave holds its quality despite the raging storm. Joining me for this session is Jamie Hancock, whose eyes start glowing when he talks about the Hebrides. Adam Lewis and Ross Williams are also here, having just made their way over from the Tiree Wave Classic. A great day’s sailing is a prefect ending to the trip. Due to the weather most ferries off the island are cancelled. After waiting the whole of the next day at the harbour in Stornoway I get a lucky last spot on the freight ferry back to the mainland. Instead of reliving the excitement from the final few days of the trip, the comfort of the warm cabin and steady sound of the ferry’s engine make me fall into a deep sleep. I leave the island even more determined to get out there and discover!