In 2015 Fanatic surprised the windsurfing market with a new and completely different looking board, the Stubby. For 2017, Fanatic is extending the concept into their FreeWave and Freeride lines. Fanatic Wave R&D Manager and PWA Pro Klaas Voget gives us the lowdown.

WS: What’s so different about these short-nosed boards?
KV: It’s the feeling under your feet. These boards are an exciting and unique ride. The shape of the nose is the first thing you recognize, but the concept behind this design is more than just a chopped off nose. Fundamentally it’s the idea of maximizing the effective rail line and reducing the board to its functional length. The more parallel rails provide excellent control and fast planing characteristics. The straighter water flow around the board produces less drag when compared to a rounder outline, which increases overall speed. The much wider tail and nose gives a lot more stability to the board, whilst the narrow centre balances out the extra width under your feet. Our first board in this direction was the Stubby. Long before we launched it last year, we knew it had what it takes to be loved by many, rather than being a niche product for a handful of hard-core wave freaks. It’s the easy planing, the control and speed the board delivers in average conditions and less than perfect days; it’s so impressive. With the compact length and overall trim – which is much further back than usual – the reactions are super responsive and quick, making these shapes feel alive! At the same time the short length feels natural and not as weird as you would expect. But the real winning characteristic of these boards is their huge range! The Stubby is super fun in smallish side-onshore conditions, but I can easily take it out in 4m side shore Ho’okipa and still love it! 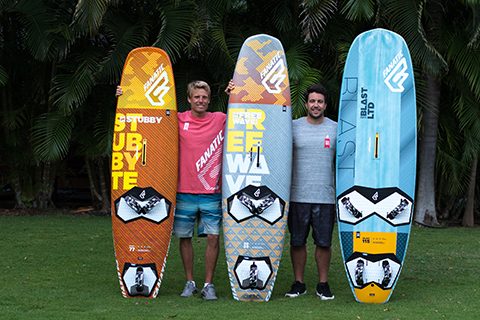 Fanatic’s Klaas Voget and Dani Aeberli show off the fruits of their work. PHOTO Manu Grafenauer

WS: How did the idea come about and how did you get this concept working so well?
KV: Sebastian Wenzel and I are constantly looking into different surfing concepts, yet the actual input for our first board in this direction came from inside the Boards & More group in early 2014, when the R&D Team of North Kiteboarding showed us their latest protos. Their excitement gave us the initial push to build a windsurf board with a similar idea. I think our intense research and input from North Kiteboarding, in combination with the huge database of shapes Sebastian has built over the years, all played a part in our first design. We kept the R&D process totally under wraps from thereon out, and developed it for more than a year when we launched the Stubby. The big success was that we didn’t focus on making this board something for certain conditions or a certain type of rider. We spiced it with a pretty flat rocker line, a controlled V bottom and all the user-friendly elements whilst fine-tuning the shape. The result was so good that my teammates and I use the Stubby in PWA competitions. Its carefree yet secure character, as well as its outstanding upwind ability make it a huge success. It felt natural that the FreeWave STB and the Blast should follow this path.

WS: The compact shape concept originated from the world of surfing. You’ve now taken it to flat water with the FreeWave STB and the Blast. How does that concept work in a totally different environment?
KV: There has been a lot of exploring with parallel rail concepts in the surfing world. The main benefits of these so-called ‘modern planing hulls’ is their ease of use and the speed these shapes generate. In windsurfing we have completely different forces working the board and fins when compared to surfing. The board doesn’t just have to work on a wave, it also has to perform in a straight line and in jumps. During the R&D process we found the concept worked well not just on a wave but was especially efficient on the way out through the break. The new FreeWave STB and the Blast are the logical consequence of our findings from our different Wave protos. We explored all the segments throughout our range and found the perfect fit in the FreeWave, and the sporty Freeride range. The STB is the next level all-round performer! It’s so crisp and fast. It just wants to jump and fly around. On the wave it’s slashy and forgiving at the same time. A bit like the classic FreeWave, but with lots of extra hp! And the Blast, I must say I can’t remember having so much fun on flat water and open seas just blasting around! It feels almost as fast as our Falcons and is an effortless ride. I’m sure the Blast and the FreeWave STB will put a big smile on a lot of windsurfer’s faces!

WS: So who should grab one of these modern shapes and who should stick to a proven ‘regular’ board?
KV: Generally it’s much more a question of personal taste rather than ability, location and conditions. In our range, we’ve placed the Stubby-Style boards in the ‘next step up’ category of each line. If you’re an experienced wave sailor facing a lot of ‘average’ days, then the Stubby is what you want. If you’re a wave newbie, the extra length and width of the TriWave will give some additional stability. The Quad targets the experienced wave sailor who gets to sail in ‘better’ waves more frequently. The FreeWave STB is the next level cross-over shape from flat water to smaller waves, mainly for the rider who wants one board that fits all. If you prefer the classic outline rather than a crisp, sportier ride, or you’re looking for that extra forgiving length and smooth turning, then we still offer the classic FreeWave. The Blast is placed right between the easy going Gecko and the lightning fast Falcons. If you want the next step up from your Gecko or classic Freerider, but don’t want to fight with your gear and bring the physics to the limit, then the Blast is your board! It’s made for the rider who wants to overtake their buddies with ease and nothing but a smile on his face. Sporty Freeride 2.0!