A well named board, providing all the minerals and ammunition for the rider to launch a full assault in any coastal environment! Naish have encapsulated simple accessible fun in the 105, in both appearance and practicality, as well as its plug and play sailing manner. 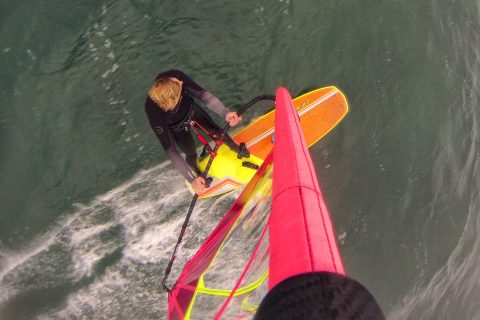 Naish’s windsurfing board lineup is clean and uncomplicated, the outlines of each board series possessing similar qualities and attributes. From the freeride/slalom Galaxy to the freemove Starship and right through to their Hover range of foiling boards, there are consistent elements in their form, such as diamond noses and parallel rails, leading to wide, scalloped box-tails. The Assault is classed by Naish as their wave focussed offering, the 85 well liked by the team when tried in test and featured last issue. This 105 is the largest in the Assault’s four board lineup and is the natural inclusion in this crossover test. Compact and boxy, it is the shortest and narrowest here, yet has easily the widest one-foot-off tail measurement in the group. Produced in the brand’s S-Glass sandwich construction, it is also the lightest on test and has a no-nonsense bottom shape, with vee throughout, complimented with a subtle wash of double concave. The board’s rails have a hard edge along their entire length, exhibiting relatively little tuck, and there’s some side fin-boxes included for a thruster setup option, their angle displaying some noticeable toe-in. Supplied with a single US fin, high density deckpads, and three easily adjustable Velcro straps (since there are no outboard options), the deck of the Assault mirrors the clean straightforward focus that seems consistent throughout the Naish brand today. Simply plug in your fittings, choose a stance width to suit … and go! 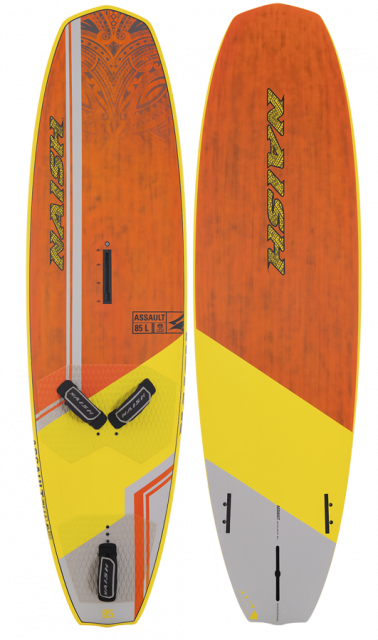 “The Assault is for any wavesailor who needs a board to perform in a broad range of conditions. Keeping versatility in mind, these unique boards combine early planing with the turning ability of a pure wave board.”

Small and compact underfoot at rest, the Assault nonetheless feels balanced and carries weight well, responding positively as power is supplied. It has a very easy and considered nature, remaining planted and predictable as the rider moves back to find the centrally placed footstraps. An honest ‘plug and play’ partner, requiring little technical input or thought from the rider, the Assault responds well to the power supplied, whilst the drive from the fin gives plenty of feedback to push comfortably against. Used in a blasting role, we had anticipated that the Assault would come unstuck, given its inboard stance … and yet it certainly didn’t embarrass itself against its peers. Yes, you can feel your back foot reaching for the windward rail to gain more purchase … yet the 105’s comparative speed is very respectable, given its stated ‘Wave’ oriented design brief.

Take it out in coastal seas and this easily attainable speed makes the Assault a great deal of fun for aerial antics, hitting a ramp before feeling compact and manageable in the air. Used with the single fin supplied, it has the drive and dependability to reassure the rider in the harshest conditions, offering that ‘get out of jail free’ card as it planes away from trouble. In more idyllic wave riding conditions, swapping the setup for a set of thrusters can enhance the board’s looseness and turning prowess. There is some real toe-in in the side fins orientation, and we did notice a slight reduction in the Assault’s speed and alertness … yet the trade-off was justified when dropping into a bottom turn, the grip and drive through the tail of the board really helping to redirect it tighter up the face. When the ethos of the whole brand seems to focus around a clear message of simplicity and fun, it is striking to see how this has been epitomized so aptly in a board design.

Bottom shape: Vee with subtle double concave throughout, the vee becoming pronounced in the tail.

Back to test overview page: