An easy user-friendly contender, unmistakably embodying genuine wave board DNA, yet with extra surprises lying in wait. Fast, with a supremely smooth rail-to-rail response, it maintains its speed and glides through turns as if possessed. 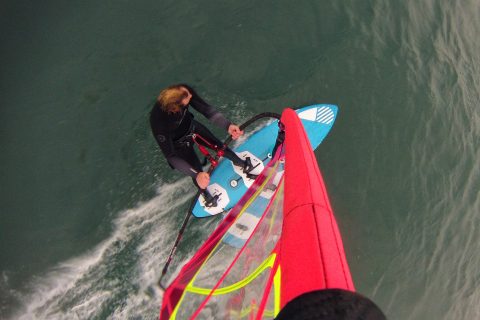 As with Goya, Quatro have adopted a two-year life cycle for their products, meaning the Power Pro freewave series remains unchanged for 2021. We tested the 94 last season and were impressed with its accessibility and dynamic carving capabilities, so it would be interesting to see how its larger sibling faired. With a pointed nose and squashed tail, it has a distinctly rounded outline, its widest point placed forward of the board’s centre, giving the outline full, broad shoulders. Volume is distributed evenly, before thinning quickly in the tail, and the finish is very classy, dressed in blue and with a sanded back surface and considered use of the non-slip. On the underside, there is plenty of tuck in the rails around the shoulders, before they become soft in the nose, and the side fins do display a subtle amount of toe-in, both attributes hinting at the Power’s wave-riding heritage. The fittings are excellent, as we’ve come to expect from the Quatro camp, the cushioned diamond-grooved KT deckpads combining with the excellent MFC straps to offer a secure connection to the board. In the literature, the 105 is said to come with a 23 cm fin, although our test model was supplied with a 25 cm fin. This may have been a mix up, so we tried it with both.

“The Power Pro sports the fastest tail rocker in the new range, milking that extra bit of naturally aspirated early planing and fast glide over the other boards. While the Power Pro is still super agile, you’ll notice right away that it’s easier to reach your proper position in the wave fast enough. You’ll be there in time, instead of wishing you were.”

Stepping onto the Quatro initially, you’d be forgiven for checking its quoted volume, feeling smaller underfoot than all the other boards in this group. Nevertheless, deliver power and it tracks well, before releasing smoothly and progressively onto the plane. The straps are very easy to find, placed further forward on the board than most. In fact, such is their position that it’s very achievable to get into the straps and remain in them whilst off the plane – a neat and useful trick we’ll come to later! In cruising mode the Power provides a very smooth and accommodating ride, transitioning almost instinctively from rail to rail. It has a wonderful carving nature and would be a great tutor for the progressing intermediate with the intention of mixing it up in waves in the future. What we didn’t anticipate is just how fast the Power actually is! Using it for drag racing against its peers, we couldn’t help but be impressed with its speed, particularly off the wind, where it’s easily a match for most here. It goes to show just how much its easy, calming character belies its straight-line potential. In coastal chop and waves, the Power really comes into its own though. Serenely picking its path of least resistance through the chop, it planes early and almost seems to hover above the chaos. And since you can stick it out in the straps during lulls, when others are upsetting the balance of their board, you can time your run perfectly with the sets as they roll in. Drop it down the face and the 105 simply craves to be carved using its full rail length, akin to a dedicated wave board, feeling much smaller and more responsive than its quoted volume would have you believe. Having used both 25 and 23 cm fin sizes, we all preferred the 23 cm, which offered more than enough drive in all environments. Fun, playful and flattering, the Quatro would fit well in a medium to heavy weight’s quiver, complimenting their wave board for making the most of those gusty changeable days, when most would be complaining of never being on the right kit at the right time!

Bottom shape: Flat in the nose, moving into mono-concave in the shoulders and mid-section, morphing into double concave by the front straps and combining with vee in the tail, finishing with rounded vee behind the fin.