More versatile and adaptable than its predecessor, the all-new Freestyle Wave is fast and engaging, and simply loves to be put on its rail, with an addictive level of bite and response. 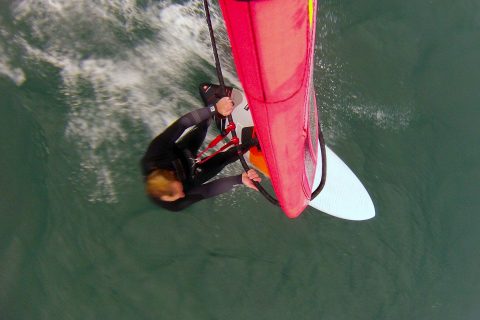 To mark the first season in their second quarter-century of existence, RRD have completely revised their Freestyle Wave offering, with six new designs ranging from 78 to 114 litres. All six sizes are available in three technologies, from the premium Black Ribbon option, (using Innegra carbon throughout the deck and hull), to the LTE incorporating a wood laminate and biax fibre construction for the more price-pointed budget. We’re testing the middle contender here – the 104 in LTD technology, which sees biaxial Innegra carbon used on the deck, and glass on the hull. The Freestyle Wave has a strong dynasty in RRD’s archives, always offering super early-planing performance and practicality, and often defining the crossover category’s plug and play aspirations. So a quick look at this year’s contender and it’s clear to see a change in design pathway at the very least. Said to combine “an extremely fast rocker-line to a pure new wave outline”, the most striking aspect of its redesign are the distinct wingers in the 104’s tail. Chunky in profile and domed in the tail, it has a real mix of attributes, with a long rocker flat before a late kick in the nose, whilst the rails soften quickly from a start point between the two strap sets. Supplied with a single K4 fin, it can nevertheless be setup as a thruster, thanks to the addition of side slot boxes, the dual density deckpads playing host to multiple inboard and outboard options, with the four supplied straps produced specifically for RRD by Dakine. 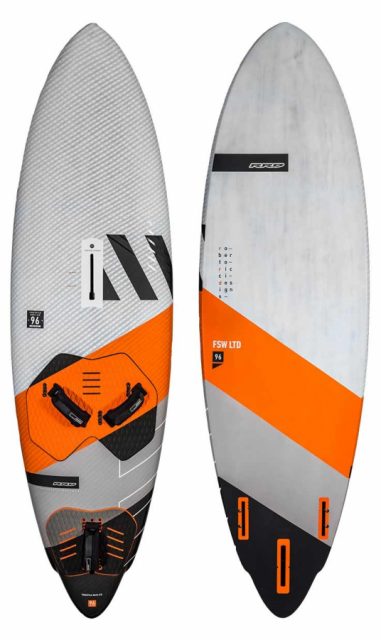 “The Freestyle Wave is capable of reaching high speeds, but once put into action it has the skills of a real wave board. The new tail with wingers adds grip and manoeuvrability.”

In the past, the FSW franchise from RRD has stood for super early planing and accessible performance in what was effectively a high wind freeride platform. For Y26, there is a slight shift sideways from this mantra … increasing versatility and appeal, yet without completely erasing some key virtues. First of all, the 104 releases onto the plane early, perhaps not as passively and effortlessly as its predecessor, but it is in no way sluggish. The straps are placed really far forward in the board compared to others, making them easy to reach and step into. Push more power into it and the 104 responds well, accelerating smoothly to an impressive top speed, providing an active and engaging ride. The deckpads provide excellent traction, the fin plenty of drive to push against, but we did find the Velcro straps supplied with the RRD difficult to adjust to a larger size. The outer neoprene sleeve restricts the inner webbing from adopting a bigger profile, so a bit of playing is required, and ultimately we’re sure they will soften over time. Blasting in coastal conditions, the FSW is extremely comfortable for long periods of use, ironing out any hard impact as its upturned nose hunts and dances, giving a real sense that the board is alive. It’s in transition however, that the new design really begins to shine. In the gybe it bites in beautifully and cuts such a smooth flowing arc that it can’t help but inspire you to push harder in the next turn. The narrow tail really provides the key, giving the 104 a turning radius and response of a much smaller board. This translates well in a wave environment too, where the use of a thruster setup helped to extend upon what was already a very respectable performance with the supplied single fin.

Bottom shape: Rounded vee in the nose, merging into vee with double concave by the shoulders and remaining uniform right through to the tail, finishing in rounded vee behind the fin.

OTHER BOARDS IN THIS TEST

Back to test overview page: