Sarah Hauser heads to the Bajan desert in search of wind and waves to perfect her aerials, and finds herself recharged in ways she didn’t expect.

Punta San Carlos in Baja is one of the most special places I’ve been to. It’s about an 8-hour drive from the Mexican border. Once you get there, there is no store, no water and no electricity, but tons of waves and beautiful sunsets. I had been dreaming of getting over there on a good swell before the end of summer to practice my aerial game and recharge my soul. What I didn’t expect was this trip to take me through so much growth, and to a place of total bliss. 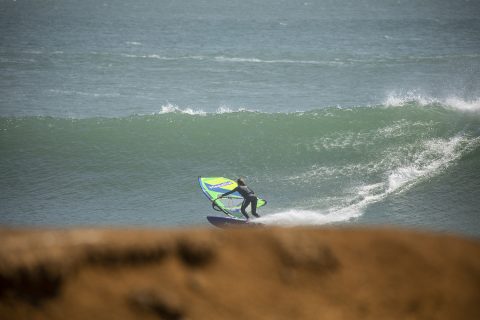 Dropping in at San Carlos

It all started with the surf forecasting website Surfline, showing a south swell on the horizon, and looking good for Baja. Before that, we’d been making the best out of typical Maui summer conditions (flat and nuking windy) by wing foiling. It was a good way to ride open ocean swells and feel like we were still surfing, but spoiled me has to admit, it did not feel as good as windsurfing in waves. So I got to business and hoped for a swell to pop up and 6 weeks later, here it was, a succession of pulses of south swell and maybe some wind. Kevin Pritchard and I had been texting back and forth. As he’s climbing to the top of the mast of his newly acquired sailboat, “Knot a Clue”, to fix a broken part, he eloquently texts back, “Leave tonight?” 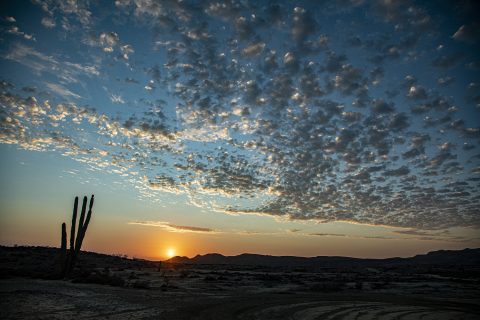 The beauty of the desert

A red-eye flight later, we landed in LA, got to Kevin’s Sprinter van and shopped for food and a tent. Then we picked up Angela Cochran, the third musketeer of this operation. Angela and I met competing in the Aloha Classic and training at Deep2Peak in Haiku. She used to compete and travel the world to windsurf during the glorious era of windsurfing. She’s got 4 children, 2 cows, a badass calm face, and she never says no. Whether I ask her to go out at Ho’okipa on a big day, or if she wants to do an extra set of burpee pull-ups, she’s always game!

As we’re getting to the last part of the drive, the 2-hour dirt road, Kevin and I are discussing the likelihood of success of lavender beer for a male market. I look at the window and reflect on my goal coming to Punta San Carlos – AERIALS! I’d been dreaming to go to Cape Verde one day and I told myself it would be a crime to do so without knowing how to do proper, real-deal, big flying in control boosting aerials! And my soul knew that in Baja I could get the practice and confidence that I needed. “Please please” I silently pray, “please be windy, please let me land those aerials, let me find the right waves and the right sections!” 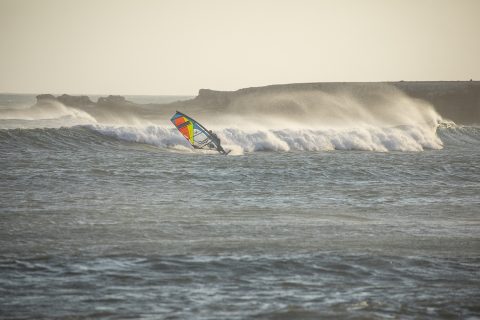 View from the water

“Why does it always have to be so tricky!” I scream in my head, while sinking my rig before the next set breaks and pushes me closer to the cliffs and the no-wind zone. The first pulse of swell we got was the leftover of a hurricane, therefore it was big waves and light winds. Every aerial attempt cost me so much energy and I kept landing out the back. Later that day I watch the video footage captured by KP and ask for his insights. “You are going at the section and you have already decided that you will go out the back”, he says. Or in other words, I look like I’m scared and not committing enough. Ouch! That’s tough to hear, but I don’t dwell on the ego jab. If he says that, it could be because he thinks I have the potential to do better, at least that’s what I choose to believe. 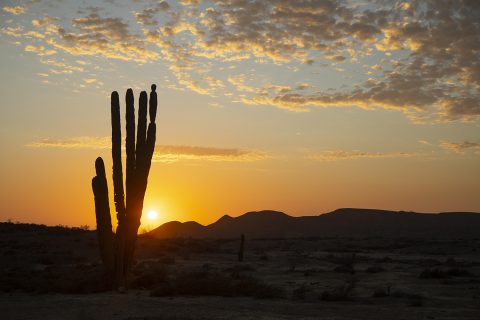 The sun goes down

The next pulse of swell was perfect and the wind got stronger. Many waves were caught and shredded into pieces by Kevin, Angela and I. My Thai boxing taping skills came in handy to cover the blisters on my hands. Each day we all had at least 2 long sessions and rode hundreds of waves. We sailed till sunset, forgetting sometimes to watch the section down the line because the view of the pelicans flying into the red sky was too mesmerizing. I was on dinner duty and overcooked every meal, but it didn’t really matter. We had warm nourishing food, Baja fogs (beer with tequila and lime), a sky of stars and the unstoppable sound of peeling waves to cradle us to sleep.

On day 4 during the evening session I lined up with the perfect aerial section. I could hear KP’s voice asking, “Do you want to go out the back, or do you want to commit?” So I committed and got lifted in the air by the offshore wind. I held on and pointed down the line, but landed on the whitewater and crashed. It was an incredible sensation to fly like that and KP got a sick picture! I definitely felt that I was getting better, but I still hadn’t landed the aerial I wanted. 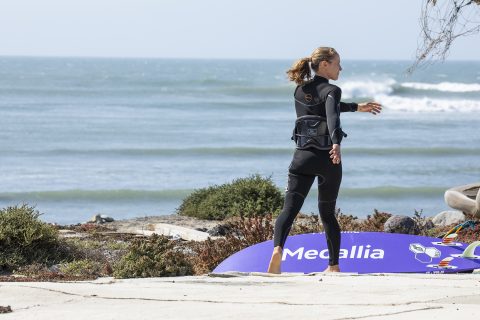 “You have to be focused, but you also have to be able to let go and trust that you’re doing the right thing”. Angela gives me a pep talk while we’re making sandwiches on the last day. This whole trip she has been non-stop surfing, winging and windsurfing… crushing it like a hardcore athlete. I was watching her in total awe. At an age when most people decide to take it easy, maybe learn to kite (ha ha!), she followed me on a last minute decision to the middle of the desert, to a spot she’s never been to before, and spent more time on the water than a 15-year-old on fire. Her words of encouragement and the confident motherly way that she uses to deliver them, were the perfect balance to the ego jabbing savage comments unleashed from KP. “You need to attack more, you’re not here to play. Stop doing one big turn and take forever to figure out the next one. Attack!” So in full froth mode, we went out for the last session of the last day and I had it, my perfect wave: two big turns, one aerial, one big turn and a small finishing turn. I raised my hand up in the air, stoked as can be. The memory card of the camera had run out, but KP saw it. “You did fantastic!”, he said; praise at last! 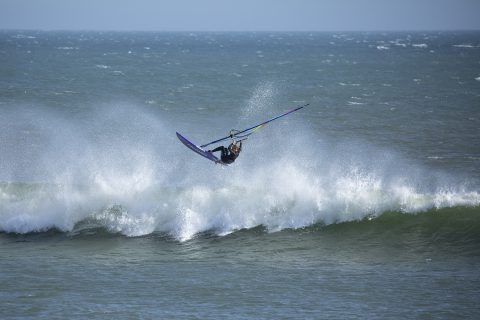 We then left San Carlos at sunset and drove back to civilization on the dirt road, stopping on the way to admire the giant cactuses, feeling so content and exhausted. It’s so funny to me how we can feel closer to answering the big questions of life when we spend time doing what may seem like the most selfish, silly and unproductive thing: drawing lines on waves in pretty remote places with just a few close friends. Trips like these recharge my soul and make me feel so grateful to be alive.