The plug and play maestro! The JP FSW 94 provides a classic windsurfing feel, set to get you charging hard (and smiling) in both flat water and coastal conditions. The fin setup supplied is a great compliment to its diverse nature, but some extra options (and a foil!) can really expose its stunning all-round capabilities.

The Freestyle Wave has consistently been one of JP’s top-sellers, with an established reputation for ease of use, versatility and practicality. Described as the “all new all-in-one”, the range has been completely revised for the 2022 season, offering five sizes and two construction options (the smallest 78L version solely available in their dearer PRO construction). Foiling’s proliferating popularity is spreading all over the watersports industry, and windsurfing’s crossover market-segment is no exception. Built into all of JP’s new Freestyle Wave PRO collection is a foil-ready power box, which will widen the wind range and potential versatility of this board further still. And whilst the foil box has been added to the board, JP have very much focussed on the board’s ‘fin’ performance too. At first glance, the most noticeable change from last year’s model is the shaping in the nose. Maintaining wide shoulders to enhance its parallel rails (a now common feature adopted from the ‘Compact’ concept, aimed to improve early planing performance, speed and stability), the 94’s nose has been slimmed down in profile to reduce the swing weight. As a result, more volume is placed in the centre of the board, making it increasingly compact. The deck shape is relatively flat compared to the others in the group, said to provide “a comfortable stance for all foot strap positions”. Perhaps the board’s new foiling element has had some influence as well? As we move to the underside of the board, what stands out most is the strong vee and increased double concave in the nose, both of which are noted as features this year, pledging to improve the board’s touch down in chop and overall riding comfort. Moving rearwards towards the board’s hips, the vee starts to fade and combines with thinned down rails, intended to improve manoeuvrability. And as with year’s past, the quest for early planing performance looks to have been a focus for JP this year, adopting a flatter rocker line, along with a new G10 fin, which, with its increased area at the tip, should provide extra drive to get going. 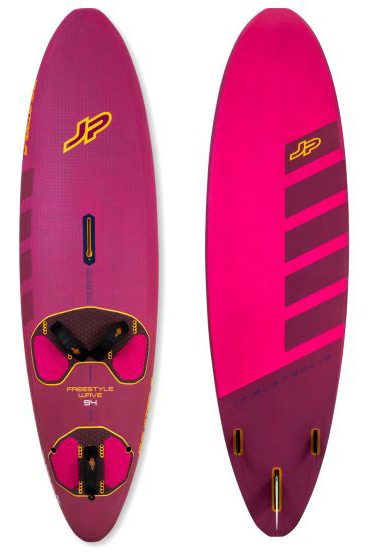 “Hassle-free medium to high wind freeriding, bump and jump blasting, classic freestyle, high-speed carving, wave sailing… You name it, and the Freestyle Wave has it in [its] bag.”

Over the years, the Freestyle Wave has been a benchmark ‘plug and play’ contender in this category, and this new generation JP picks up the mantle of its heritage admirably. The moment you pick up speed, sit down in the harness and push through the feet, the board quickly accelerates to a very respectable speed, with a lot of confidence and drive supplied by the fins. With so much traction and security offered in fact, the rider is left with the belief that if they want to go faster, they just push harder! Engaging and rewarding to ride when locked in a speed battle with a fellow free sailor, its hard, defined diamond-grooved deckpads provide some fierce traction to press against. Hunting for yet more speed is not out of the question however. Swap the thruster fin setup out for a larger single fin, and the board can really be loaded, allowing it to fly more freely on the fin. And as the board approaches a lull, the width in its tail provides the float and stability to keep the board planing without too much rider intervention. There’s also plenty of width in the board’s shoulders. making the JP wonderfully stable during the tack for a board of its size, whilst in the gybe it had a safe and predictable style, encouraging the rider to push more assertively to tighten the turn. On the wave, the JP once again impressed, with plenty of drive to punch out through the surf, and speed to charge down the line when on the way back in. In confused and challenging seas, it’s a super reliable board to use, with the speed and composure to enjoy plenty of aerial antics to boot. Whilst wave riding, the G10 fin suppled is stiff and prescribes a relatively fixed line, so to help vary the turning arc, we found the addition of a softer central fin helped. We didn’t get a chance to try the JP with a foil … but have no doubt that the foil box is a useful addition to add to an already incredibly versatile platform.

Bottom shape: Vee with double concave running throughout, finishing with a straight vee in the tail.

OTHER BOARDS IN LINE UP