With the FSW 96, RRD has provided a board that can really perform in the waves, whilst maintaining a very respectable amount of speed. The tail is begging to engage in hacking turns whilst its heavily centred volume gives this board real comfort and feeling in a straight line. 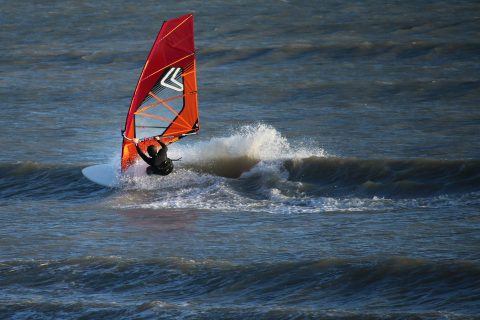 The adopted biennial cycle of RRD’s board designs means that this season we are testing the Y26 Freestyle Wave for a second year, swapping out the 104 for the 96. Last year’s complete renewal of the Freestyle Wave lineup boasted six new shapes across the entire range, from the 78 to the 114. The new tail outline, with its pronounced wingers, were a dominant feature of the Y26 blueprint and gave the 104 the turning radius of a much smaller board, so we were excited to see how it translated in this 96-litre model. And reading the RRD literature, another key asset of the board is said to be its fast rocker-line, which aims to maintain its freeride performance, whilst the upturned nose increases its versatility in waves and chop. There are three construction options to suit all demands and budgets, from the price-pointed and robust LTE, using wood technology, to the high-performance LTD construction (claimed by RRD to be their ‘industry benchmark’), which has a new deck laminate using biaxial Innegra carbon to reduce weight and increase impact resistance. Finally, there’s the top-spec Black Ribbon technology, which promises to be even more reactive and alive, thanks to a quoted 88 grams of carbon fibre on the bottom and Biaxial Innegra carbon deck, which reduces the board’s weight to a quoted 6.5 kg for this 96. It’s certainly not cheap, but with the carbon laminate showing the whole length of the hull, it certainly is a thing of beauty. Supplied complete with dual density deckpads, and a number of placement options for the four Da Kine straps provided, it was noted that the twin back strap plugs are still very much inboard, along the centreline. And unlike the 104 tested last year, this 96 is supplied as a thruster, K4 pleasingly remaining the fin supplier of choice. 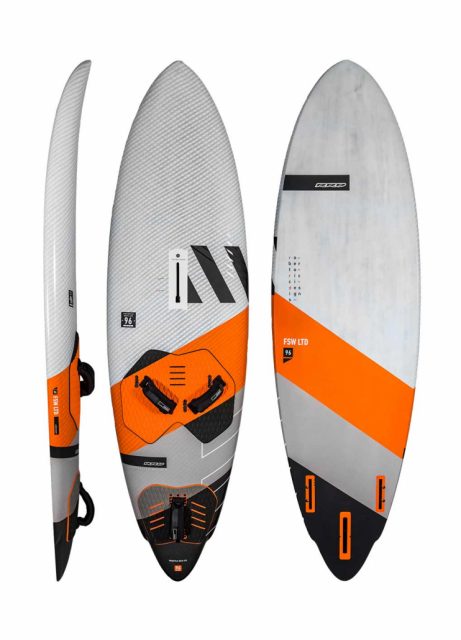 “The Freestyle Wave is capable of reaching high speeds, but once put into action, it has the skills of a real wave board. The new tail with wingers add grip and manoeuvrability.”

Whilst the RRD is the largest contender on test if you go by quoted volume, it actually felt one of the smallest in the lineup when first stepping aboard, particularly noticeable if your stance is forward, pushing any weight through the nose. Its balance takes a little getting used to, and it’s certainly not as passive or ‘automated’ as its predecessor, but with some rider intervention this 96 is still very capable of releasing onto the plane early. Step back early but drive forcefully through the front foot to keep the board flat and it displays an engaging corky nature, rising up to sit high on the water’s surface. The rider is encouraged into an upright and forward-facing stance as the RRD dances playfully over the water, exhibiting a somewhat surprising turn of speed given its unmistakably manoeuvre-oriented riding style. Perfectly at home when used on flat water, it is comfortable to use for long periods, the fittings and deck shape providing a real sense of connection to the board. A large amount of its volume is focussed between its shoulders and hips, making the rider’s stance centred over this area, leaving the tail free to engage in manoeuvres at will. As such, when gybing the 96 it becomes clear that the wingers and narrow rounded tail allow the turning radius of the arc to be dramatically tightened, inspiring the rider to drive harder as they cut through the water. More practice builds more trust and understanding of its potential, and keeping weight forwards through the turn helps to use the full length of the rail and amplify the speed and smoothness of the turn. It’s an addictive feeling and completely transferrable into the wave arena – an environment where this Freestyle Wave is instantly at home. Akin to an oversized wave-board, with the natural speed of a high wind freeride, it is a lot of fun in making the most of less than idyllic wave conditions.

Bottom shape: Rounded vee in the nose, to pronounced vee with a wash of double concave from the shoulders into the tail, finishing in rounded vee behind the fins.

OTHER BOARDS IN LINE UP