If you’re looking to take your coastal sailing to the next level, then this may be the board for you. Calm in nature but accessibly dynamic in its rail-to-rail response, the Power is sure to get you hacking at turns in a range of conditions. 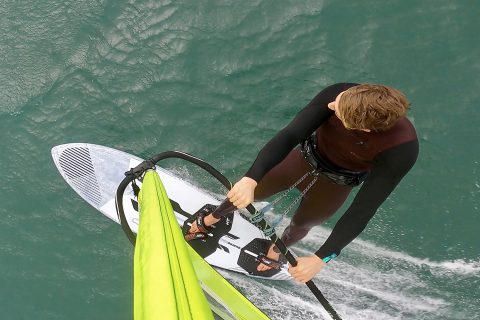 The 2022 season starts a new two-year cycle for Quatro, their mission stated as providing maximum grip, maximum downforce and maximum confidence throughout their entire range. The Power Free Thruster is the brand’s all-rounder, which is said to have you covered for everything from wave riding to freeride blasting. Clean in design with its white and black carbon finish, it is produced in their established Pro Carbon Monocoque construction, with visible layering of the carbon reinforcements in vulnerable areas. Supplied with four easily adjustable MFC straps and MFC’s FW/TF thruster setup, the fins are all screwed in from the deck of the board, for simplicity and practicality. Common across other boards in the crossover test, the Power’s rocker is decidedly flat, most noticeably between the rider’s stance and into the tail, which is said to improve the board’s speed, stability and early planing ease. Rounded in outline, with broad shoulders and tapering smoothly to a narrow squash tail, the Power has a full rail profile towards the front of the board, leading back to a distinctly thin rail profile in the tail. The underside of the board combines a single concave in the front, moving back to a double concave by the straps before finishing with straight vee. It’s a classy looking gun in its monochrome trappings, and as with the Goya tested elsewhere in this issue, the three-hole footstrap plugs present in our early sample board are to be replaced by four-hole plugs as standard, re-establishing the use and relevance of the anti-twist inserts. 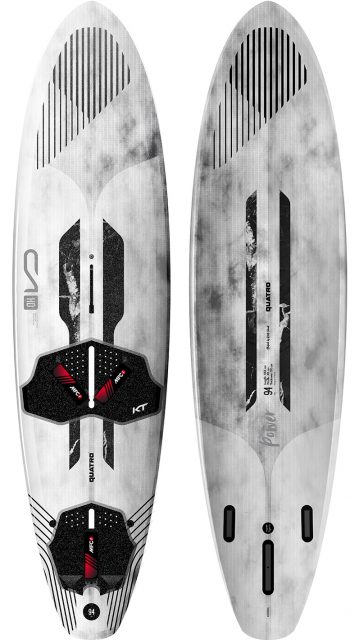 “Your all-around bump & jump, swell slashing, wave-riding, freeriding blaster, the Power remains the go-to for maximum fun in the broadest variety of conditions.”

Place the Quatro Power next to other boards on a beach and you could easily be mistaken for thinking that it would be suited for a wave board test. What is more, its performance doesn’t suggest otherwise! However, its first outing with us was on flat water, and with the straps outboard and a large central fin in place, the Power impressed with a respectable straight-line speed. It’s all the more surprising when you realise the Power does so whilst encouraging a more upright manoeuvre-oriented stance over the board, rather than locked in and driving hard. It has an innate turn of speed, whilst always feeling connected and assured underfoot, awaiting command. Capable of planing super early, it thrives on being coached by the pilot for best effect, feeling planted and responsive whilst maintaining a settled nature, giving the rider absolute confidence in directing the board. It sits low to the water’s surface, the board’s tail providing ample grip and control, allowing the rider to dig deep in the gybes. With inset strap positions adopted, this low riding stance and easy demeanour transfers well into the wave arena. With its strong sense of connection the Power provides the mandate to commit hard into the bottom turn, pushing through both feet to reduce the turning arc, even if the wind is light. The volume and width in the 94’s shoulders allow it to carry extra rig and rider weight, maintaining excellent stability at all times, and once planing the minimal volume in the tail imparts the feeling of a much smaller board – two qualities that combine to make the Power a real game changer in those tricky onshore days. In more idyllic cross to cross-offshore days, it is no less at home, hunting upwind superbly in time to catch the incoming set. Dropping down a face on the way back in, the Power proves that its initial appearance wasn’t far off-track – this board is simply electric on a wave, transitioning effortlessly from rail to rail as it retains its speed throughout. It may be shepherded lazily into the crossover category, yet has an unmistakeable wave riding predisposition. A more accurate classification for the Power could be that it’s a real-world wave board, with the ease, versatility and practicality for drawing much more enjoyment from our typical UK conditions, than its more dedicated stablemate.

Bottom shape: Singe concave running from the nose to the hips. A subtle V then begins carrying through to the tail with the concave flattening out.

OTHER BOARDS IN THE LINEUP