The all-round expert, Starboard have once again successfully spread this board’s ability over a variety of disciplines. From fast in flat water, to adaptable in the waves, this board does exactly what it says on the tin! 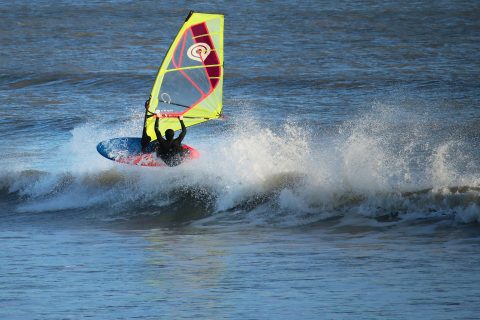 The Starboard Kode is back for the 2022 season, displaying some of last year’s design features and mixing them with the promise of increased drive, agility and speed due to new refinements in the board’s shape. The six-board range comes in ten litre increments, from 85 to 135, and is produced in their “strong, light and eco-friendly” Wood Sandwich construction, as well as the brand’s flagship Carbon Reflex Sandwich technology (tested here). A hint of the Kode’s intended versatility is provided as soon as it is unboxed, with two complete fin setups supplied, irrespective of the construction option you opt for. And to assist when tuning between the wave, freewave and freeride roles, Starboard offer a colour-coded key on the mast-track, fin boxes and deck pads, to help indicate their intended settings. Balancing an increase in the area behind the fin with an expanded nose area, the 2022 Kode is said to accelerate quicker, whilst maintaining a super smooth ride in choppy water. On the underside, the board has a strong vee that runs from its nose right through to its tail (a feature that may help to underpin their ‘smooth ride’ claim), whilst its broad shoulders sit relatively low, thanks to its adopted ‘fast rocker’. This is said to be tempered with more curvature in the rails and tail outline, to provide more bite and feel as it is put on its rail. Supplied with the brand’s quick release Starbox side finboxes and their premium Yulex ‘eco-foam’ footstraps,

Starboard should be acknowledged for offering one of the largest crossover board ranges, the 125 and 135 giving heavier riders the opportunity to get out in those flukey or onshore conditions, when they would have otherwise been forced to look at the freemove/freeride sector.

“Kodes are designed to deliver the best onshore wave performance and excel in freeride, freewave and freestyle.”

Sending the Kode out initially in float and ride, cross-offshore conditions with small but clean waves, we set the board up with its thruster fin setup. The key and guidance provided on the finboxes was easy to follow, but we’d say the board’s looseness and carving potential can be improved by shifting the central fin further forward still in its box. Indeed, it’s great to have the room in the box to experiment with this! On the wave, the 95 performed well, with speed, comfort and plenty of drive through the turn. You’d be forgiven for initially thinking it prescribes a somewhat fixed arc, but push harder and it really responds. Tested later in cross to cross-onshore conditions, its early release and instant speed are very welcome assets, giving the rider the confidence to attack the conditions and charge into more critical situations, safe in the knowledge that the Kode has the early planing response and speed to ‘get out of jail free’. We did find the shoulders of the Kode caught at times in steep wave sections, requiring a more sedate riding style and using the rails in the tail of the board, rather than driving forcefully through the front foot. Switching the thruster fins out for the single fin supplied and changing the straps to their outboard positions, the Kode is set up for high wind freeride blasting – a role in which it certainly excels in. With its low nose rocker, it has a naturally gunny stance on the water, the fin offering plenty of feedback and traction, allowing the rider to comfortably commit through the back foot when hunting for more speed.

Evenly distributed and well balanced, the volume in the Kode gives you the feeling you are always in the right place, negating the need to change your foot position too often. It makes for an almost effortless session, allowing the rider to sail for longer on those perfect days. The gybe on the Kode needs a moderate amount of focus; if you lean back and let it bounce, it will. During the entry to the gybe, it needs to be driven, yet rewards with a real sense of connection throughout the turn, as the full rail slices through the water.

Bottom shape: Pronounced vee with a double concave running throughout the board, which becomes a straight vee behind the rear fin box.