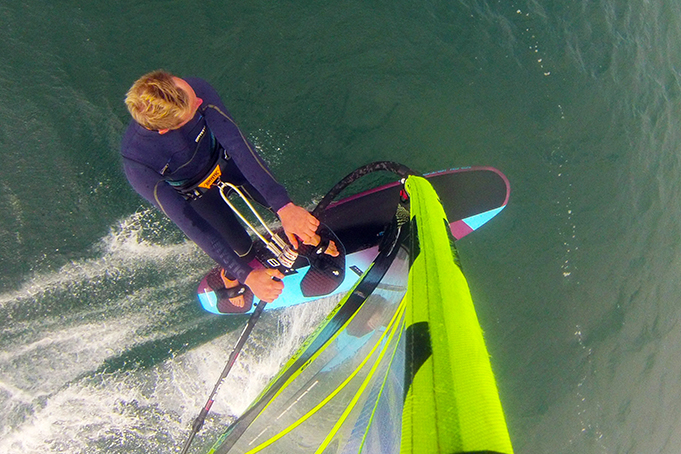 THE VERDICT
Maturing like a fine wine and no less relevant today, the JP Wave Slate Pro 87L shows how the defining parameters of compact and conventional designs have become blurred over time. A supreme all-rounder for UK conditions, it has key performance qualities that both flatter and excite. 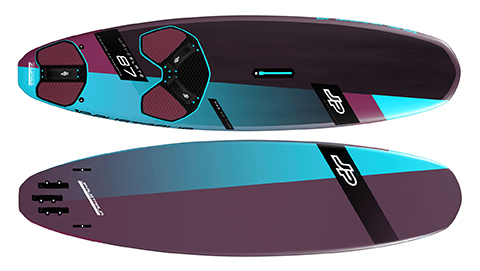 THE LOWDOWN
This second generation Slate is now in its third season, offering three sizes from 79 to 96 litres. This 87 is certainly the most obvious ‘compact’ design in the test group, with parallel rails, a squashed diamond tail and squared off nose. Turning the board over, the first thing that grabs you is just how soft the rails become, tucking early after the hard edged tail and softening to provide grip in the turn. JP are keen to point out the Slate’s dual rocker line, with a straighter profile running through the centre of the board and more curvature along the rails, which take over when the board’s pushed into a corner. Available solely in S-glass Pro construction with Innegra parabolic rails, it comes complete with a fresh new colour scheme and refined fittings for comfort and practicality. There are now just three position options provided for each footstrap, yet each one is double screwed to eliminate any twist, and incorporates the brand’s new internal scale graphic to gauge size at a glance. The deckpads are dual density and possess a new horizontal diamond groove that provides excellent comfort and traction. And in addition to the thruster setup, there are extra 13 cm long slot boxes (each with positioning reference scales) to provide setup permutations for every rider preference. Note, the board was first tested with K4 fins as there was no stock fins provided for initial outings.

BRAND CLAIM
“When the wave conditions are not epic, I like to use the Wave Slate to squeeze every extra ounce of energy out of the waves. It planes super fast, so it’s easy to get going quickly to jump when the waves are breaking close to shore and it holds its speed in the bottom turn when turning in onshore waves so you can really utilize it to do radical turns when the waves are soft and slow.” – Robby Swift.

PERFORMANCE
The Slate is a three year old design now, but shows no signs of being obsolete. When we tested it back in 2017 we concluded that it was a great all-rounder and we still stand by those findings today. As power comes on, it does require a healthy turn off the wind to release, stepping back early to push air under the mono-concave. It remains fast and lively once going, accelerating quickly and feeling loose and playful underfoot. It is a great board for making the most of poor conditions, pointing high upwind and gliding through lulls with its innate speed. The fittings are excellent and provide plenty of connection, maintaining control and giving the rider the confidence to push power through  the board. In onshore conditions the Slate’s early planing, speed and upwind agility all play their part, and yet we remain most impressed with the board’s ability to maintain its speed through the turn; the Slate has a natural ability to keep its inertia. The rails are just so soft and grip the water superbly, keeping the rail locked in so that the board traverses the face until the rider wants to turn. In cross-shore conditions and clean faces, the Slate is no less potent, the rails biting well before the rider can tighten the turn through the back foot. It may not feel as sharp or aggressive as others, such as the Ultimate Wave for example, yet the speed and ease of the Slate’s fluid rail to rail response makes it highly expressive and all the more rewarding to use.