Super light, super loose and super fun! The new Nano is a revelation and takes the compact wave board concept to new levels of performance and validity.

The Nano is Severne’s ‘All-round Wave’ board and has had a makeover for the 2022 season, this being the third generation in the Nano lineage. Sitting alongside Philip Koster’s signature Pyro, it has a more compact outline, retaining width in its shoulders and hipped / wingered tail to make the rails more parallel than most. The Nano’s bottom shape has lost none of its complexity or detail either, albeit the central spine is less pronounced to improve early planing and speed. There are channels in the tail to improve grip and simulate tail kick for tight turns, whilst the rails remain as sharp as a knife in the tail, before tucking early and becoming soft in the nose, complimented with deep inset bevels. And if you study the apex of the Nano’s rail line, you see that it raises progressively towards the nose, intended to keep the rails high to prevent catching. Dispensing with the fifth finbox, all Nanos now come as straight quads for the new season, meaning more straightforward tuning and a weight saving gain. In fact, at just 6.0 kg this 87 is quite easily the lightest on test, produced using the brand’s compression moulding composite technology. Supplied with their own branded ‘single screw’ footstraps and fins (utilising their durable Slot Box+), all fittings are fixed in place with their Hex4 tool, the very same tool that can be used on the battens of all Severne sails, and even sports a beer opener! The board was supplied for test with 140 + 100 quad fins, but Severne tell us the board will be sold with 150 + 100 quads. The Nano’s thick deckpads are also worth a mention, sporting some of the more pronounced and aggressive diamond grooved tread we’ve seen – sure to provide plenty of traction.

“Sizes from 87 up have been re-designed to deliver earlier planing and higher speed. Inspired by Tomo’s new-school surfboards, the Nano is a fresh wave sailing sensation.” 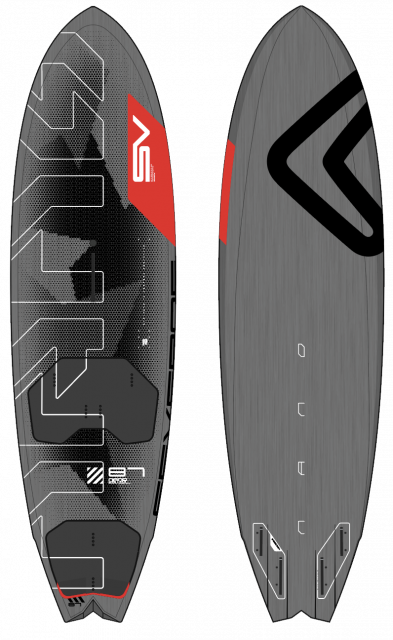 The second-generation Nano was a tough nut to really crack and understand, but with time spent tuning and adapting to its sailing style, offered a unique riding experience. So, whilst the outline of this new Nano looks nigh on identical, we’re keen to report that the subtle changes made in the redevelopment have completely changed the character of this new 87! Push power into it, step back early and it accelerates like a scolded cat! The fittings are comfortable and provide great connection, whilst the Nano’s bottom shape retains its uncanny knack of tempering the feedback of even the harshest chop. The Nano feels alive and energised, ready to punch off ramps on the way out for aerial antics, feeling supremely light and compact in the air. But it’s the Nano’s riding style on the wave that is its true distinguishing feature. Drop into a wave and the Nano feels incredibly playful. Push harder through the back foot and it has freakish levels of grip and bite, projecting the board back up the face at the tightest of angles, holding its speed imperiously until the moment’s right to crank it through the back foot. It makes riding confused seas a lot of fun, fitting into the most cramped sections, the rearward fins and tail releasing at the top of the wave for redirection.

Bottom shape: Pronounced vee with slight double in the nose, combined with deep bevels that defuse out by the mast track. In the mid-section there is still pronounced vee with double, which continues all the way through the tail of the board, to the channels in the tail.