An out and out wave board thoroughbred, with a conventional front-foot riding nature. Fast and super confident on its rail, it comes into its own when properly powered, used in big seas and clean open faces, or those turbulent days when control is paramount. 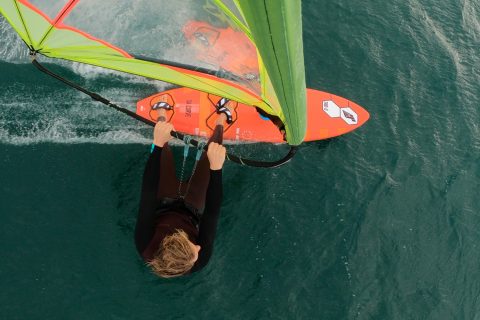 The Da Curve is Tabou’s ‘Hardcore Wave’ board range, championed by the wave riding deities of Thomas Traversa and Graham Ezzy, and remains unchanged for the new season, save for a graphical update. Available in four sizes from 76 to 96 litres, all sizes exclusively adopt a thruster fin configuration, the two larger models possessing a straighter rocker-line for “enhanced planing performance for heavier riders and light-wind conditions”, whereas the 82 and 76 have “more curvature for tight turns and lighter riders”. The longest and narrowest in this test group, it has a conventional drawn-out outline, the curvature in the rails accentuated by its pulled-in nose and tail. The rails themselves have a lowered apex to help improve initiation and grip through the turn, whilst the curvature in the board’s double concave bottom shape has been increased along the rails to help lock the board into the turn. The underside is then finished with a signature sharp, defined channel extending through to the swallow tail, with an internal wash of vee. Supplied with thick diamond grooved dual density deckpads and G10 fins, the Da Curve is available solely in the brand’s premium Team construction, using a combination of glass, PVC, wood and carbon Innegra laminates to ensure the best strength/weight and performance benefits. Supplied with Velcro straps that are double screwed in the back strap to eliminate twist, there are also no less than six front strap plug holes to choose from, capable of satisfying the stance of any rider.

“Radical cutbacks, tight turns and outstanding control are more accessible than ever before with the Da Curve. Its unique wave riding performance in perfect down-the-line conditions is well-known by windsurfers around the world, but the Da Curve also unfolds its immense agility in less-than-ideal waves and onshore winds.”

Stepping onto the Da Curve for the first time, it certainly does feel its quoted volume and no more underfoot. It needs to be treated as such and responds best to being powered, turning it off the wind to get it unstuck and released. Once going it accelerates quickly, reaching an impressive speed in an instant. Narrow in the nose and tail, it feels somewhat more traditional in nature than others: a ‘proper’ wave board was the repeated comment amongst the team. Not that the others in the group aren’t dedicated wave boards; it’s just the Tabou’s outline accentuates its length and feels long and narrow, with real curvature to its rails, even though its actual dimensions are comparable to contemporary design. Properly powered, it cuts through chop and confused water states beautifully, pointing well and reaching the lineup easily. But it’s on the wave that the Da Curve really shows its colours and worth. Initiating a bottom turn through the front foot, it grips instinctively and holds its rail so smoothly through the arc, it’s as if you’re somehow connected. Transfer weight to the back foot midway through the turn and there’s an aggressive amount of bite through the tail to really tighten the angle and get the board back up the face, where you intend to be. It’s much like riding a surfboard, the turns coming effortlessly and capable of being varied at will. We tried the Da Curve in cross-on and cross-off conditions and whilst capable in both, we had the sense that it would relish those utopian big cross-offshore days, with clean open faces, where its speed, confidence and levels of grip would make it truly dynamite around the break. The G10 fins supplied worked perfectly when powered, providing the traction to drive, yet looseness to vary angles when in the turn. The Velcro straps are easy to adjust and set relatively wide on the foot. They are also easily the softest straps amongst this test group, so play with their settings and location to suit your preference – there’s certainly plenty of options available.

Bottom shape: Rounded vee in the nose, to vee with double concave, the concaves becoming more pronounced in the mid-section and tail, finishing with a channel in the tail.