A compact contemporary board with bags of performance across a staggering wind range, belied by a real sense of comfort, connection and ease. 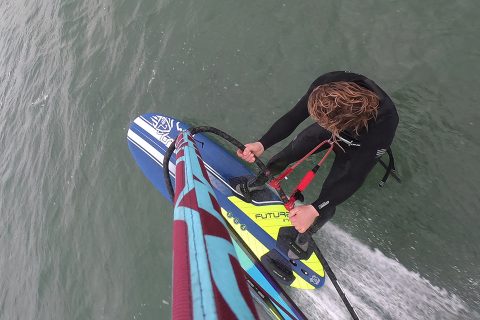 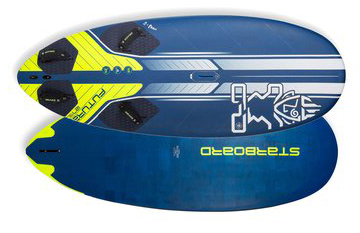 Having tested the 107 litre Futura last season, it’s the turn of one of the larger siblings for 2020. Well liked by all that tried it, the 107’s performance confirmed what was visually already apparent: despite adopting some key features (such as a sunken deck around its shortened mast track and thin deckpads), the Futuras’ development had evolved in a different direction to the brand’s highly-decorated iSonic slalom program. There was now a clear choice between the two, rather than the Futura simply being a de-tuned slalom board. In appearance the Futura 117 carries on in the same vain. It is short and wide, the wide point itself moved forward of the board’s centre point, creating a wide rounded nose, whilst its rail outline remains relatively curved, allowing for a quick taper to a narrow tail. The rails themselves are rounded and thin, going some way to explaining the Futura’s low quoted volume, despite it being one of the widest in the test group. With the only stated change for 2020 (other than a graphic update) being a beef-up in its construction, the 117 boasts the same pronounced vee in its hull as the 107, and similarly is foil compatible thanks to a reinforced Deep Tuttle box. Tested here in the brand’s eco-conscious Flax Balsa construction, it is also available in a dearer carbon layup, exclusive to the Futura range. It comes supplied with Drake “Slick” straps (manufactured from a plant based Yulex foam), with Starboard being advocates of the Eco Board Project, embracing initiatives to address the most serious sustainable and carbon-neutral issues of today.

The Futuras enter their second year, maintaining proven test-winning shapes. Wide, thin and compact, with admired performances for long distance races: Futura’s refinements allow you to save energy, maintain a high average speed for miles and turn the smoothest gybes.

With its short length and hollowed out nose, the Futura feels small and compact underfoot at rest, yet its width provides the stability to carry an 8.0m easily. When power is delivered, it responds purposefully once turned off the wind, accelerating smoothly, its narrower tail resulting in the straps being more inset and easier to locate. The volume and dome in the tail provides real rider comfort, whilst the thin deckpads convey response and connection between board and rider. There really isn’t a hint of back leg burn or stress through the legs, the Futura trimming itself intuitively as it sits high above the water’s surface in all but the planted tail. Efficient and engaging, it feels much smaller than its quoted dimensions and is easy to use for long periods, its sense of feel and control giving it a wide user ability appeal. The fin supplied with the 117 is a quality Drake Ready to Race blade and it compliments the board well, imparting the drive and feedback to be fast on all points of sail and through varying wind strengths. It is particularly impressive upwind, compensating for the board’s reduced tail width so that no potency is lost when trying to hold a course close to the wind. We also tested it with a performance F-Hot RWS3, which highlighted just how capable the Futura is off the wind too, making it one of the fastest in the group, especially in tricky sea states. As the wind increases, the board really begins to show its control credentials, the deep vee cutting and cushioning the path through any heavy chop as the tail retains contact with the water at all times. And at the end of each reach, there’s the gybe to look forward to – another of the Futura’s real strengths. Enter the corner at speed, and it’s as if the board sits down on its tail, offering control and tactility through the most challenging seas and moments. From there the rider can drive through both feet and use the whole rail of the board to tighten up the turn and project themselves smoothly out of the corner. If the power and impetus is lost, the narrow tail does mean it has a tendency to lose speed and stall sooner than others, thereby encouraging the good habits of carving at speed and with power in the sail at the turn. The tail width also lends the Futura for use with lower aspect foils such as Starboard’s ‘Super Cruiser’, providing the lift early and user-friendliness to extend the board’s light wind scope.

Bottom shape: Pronounced vee with slight double concave throughout, finishing with flat vee in the tail.