The Firemove has evolved to play to its strengths, being super practical and most of all fun, particularly in transition. A fast-tracking vehicle for the progressing rider, it will find real favour with those that simply want a board that flatters and provides a feel-good factor. And the honest ability to tutor into foiling is an extra bonus. 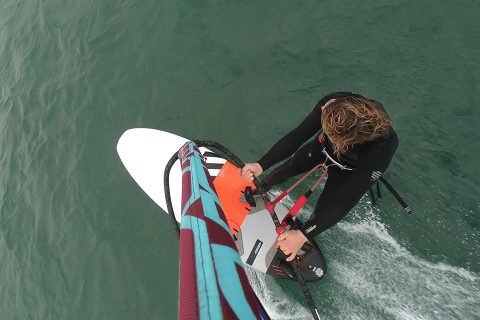 The Firemove is an integral part of RRD’s Free Line, sandwiched between the Freestyle Wave and Firestorm. It is a line with a great deal of heritage, being one of the avant-garde designs credited with exposing the ‘wide and thin’ concept that gripped the freeride discipline in the recent past. Along with its smaller siblings, this 120 was introduced last year, with the 135 and 155 added to the range for 2020 and all dressed in familiar white-black-orange graphics to celebrate the brand’s 25th anniversary. On test here is the LTE version – the middle construction option for the series (using a full wood laminate wrap), with the premium LTD and price-pointed E-Tech versions either side. It comes supplied with thick dual density deckpads, sitting under RRD’s standard Velcro straps produced by Da Kine, (which can be positioned either well inboard or outboard), and a G10 MFC Liquid Pro fin that slots into the foil-ready Deep Tuttle box. One of the shortest and certainly the widest in this test group, the Firemove has a relatively thin profile, with a subtle dome that tapers to thin rails, particularly in the tail. The other really noticeable feature in the rear is the distinct wingers, significantly reducing the width of the rounded tail. And like the Freestyle Wave tested last issue, the Firemove seems to have an extended rocker flat, before a bit of last-minute nose kick to finish. 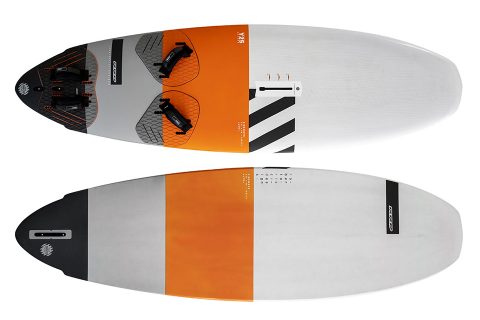 “The Firemove is known for its plug and play and superior feel from the first time you try it; early planing, acceleration, manoeuvrability and a lightweight feel over the water. Once you step on it you’ll instantly feel confident and will never get tired of this magic board.”

On the water, the Firemove has a different nature to many of the other boards on test here. Stable and easy at rest, it likes to be turned off the wind as power is delivered, but after that it really does the rest for the rider! Acceleration is smooth and progressive so as to not perturb the nervous pilot, whilst the wide and relatively flat deck provides the time and pragmatic patience as they move rearwards. The straps are easy to locate, even in their outboard positions, and the board feels balanced and comfortable for long easy cruising sessions. There is nothing tiring about the Firemove – it’s a pleasure to cover distance on, gliding through lulls and asking few questions or misbehaving, even through volatile gusts – a real plug-and-play master. The fin supplied works well and compliments the board, squeezing out a respectable straight-line speed if pushed. It is certainly freemove more than freerace, and gained little when tried with a precise high performance fin. Instead, the Firemove is designed for maximum return for minimal input – a fun and playful platform rather than a fire-snorting drag-racer. Which leads us onto the most enjoyable quality of the Firemove – its cornering. Whether you are a veteran rider, or new to the world of planing, you can’t help but get on with the Firemove through the gybe. Even if you lean back and kill the power in the sail (be it through bad technique or mistiming through a lull), the Firemove simply keeps cruising through the arc. It really is a wonder, providing a sense of connection and traction through the tail rather than demanding a full-blooded driving style through the rails. The clear difference between inboard and outboard strap positions changes the character of the board and allows it to adapt to rider requirements and abilities. Foiling is also well catered for, particularly the newcomer to flying, the inboard straps working particularly well with a low aspect foil.

Bottom shape: Vee with subtle double concave throughout, finishing in flat vee in the tail.