The descendant of one of the original architects of the sport, this third generation Wing-Surfer provides a stable and assured level of performance, providing power when required and going neutral on demand. A safe and sure bet for a fast track into the winging world. 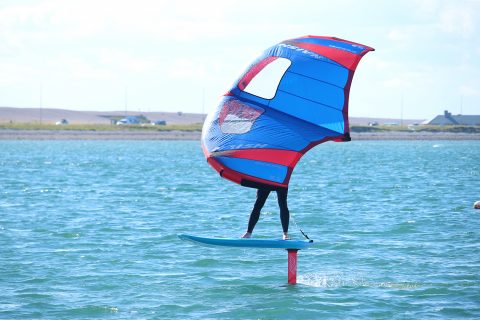 “The Naish Wing-Surfer took the world by storm with its introduction in 2019, launching the sport of Wingsurfing into what is now the fastest-growing water sport in the world.” 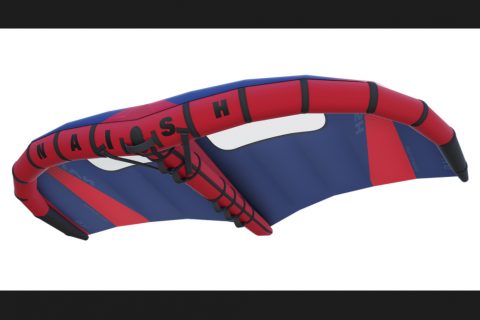 It has got to be handed to Naish (both Robby himself and the brand), that they have a deft touch at identifying the ‘next big thing’ in the watersports industry, before exposing and promoting it. Robby very much remains the focus and talisman, and under his stewardship the brand has identified and flourished in all the main avenues that have occurred in the recent past, from kitesurfing to stand up paddling, foiling (in its various guises) and most recently wing-surfing. The Wing-Surfer tested here is the third generation of its kind, its predecessors blazing a trail and gathering a deserved following as a result. This new wing is said to have a deeper profile, providing more bottom end power. The windows have been revised to “maximise functionality and safety, while reducing their overall size”. It’s advised not to fold the window, so by reducing their area, it also means the Wing-Surfer now packs down smaller. It is also impressively light at 2.38kg and comes supplied with a new coiled wrist leash and a shoulder bag with an inbuilt side attachment to house the pump (not included). Speaking of the pump, the Wing-Surfer is inflated through a ‘sure-lock’ valve, the very same found as standard on iSUPs. It’s a little detail, but a very positive and practical asset for many, if joining the winging fraternity from a SUPing pathway, meaning the requirement of only one pump. Similarly, the Wing-Surfer retains the ability of its predecessors to attach a SUP paddle to the handles if desired – a great safety feature in fluky conditions. Inflated to within its recommended parameter of 7-9 PSI, the Naish has a moderate aspect planform, its struts medium to narrow in diameter. The central strut is fed air through an 8mm connecting hose and hosts a total of five handles, with the addition of removeable (and adjustable) Y handles. The geometry of the wing’s leading edge is a flat vee, with only a subtle dihedral shape adopted, whilst the ripstop canopy remains loose.

Taking the Wing-Surfer onto the water, it is light and easy in the hands, flying cleanly so that progression from kneeling to standing is effortless, without the wingtips touching. The power delivery is soft and measured rather than sharp or punchy, the looseness in the canopy tempering the feedback somewhat. We did defer to the maximum PSI prescribed, to ensure the struts were as stiff as possible, and shifting the hands to the rearward handles in each set helped to provide maximum exposure to the wind and any leverage benefit. As such, the delivery remains subtle, yet with good timing and technique in gusts, the Wing-Surfer can be used to pump effectively, efficiently squeezing the rider and board forward. Once going it is very comfortable and settled, the handles feeling well placed and providing plenty of scope to manage the power accordingly. It has excellent stability in flight, the windows providing plenty of visibility downwind, but it is in manoeuvres that the Naish really excels. Whilst not the most compact, it remains light and balanced at all times and can be repositioned freely at will, before reintroducing the power progressively. Depowering quickly and with excellent parked stability, it would also be a real ally for any wave riding session or downwind jaunt.